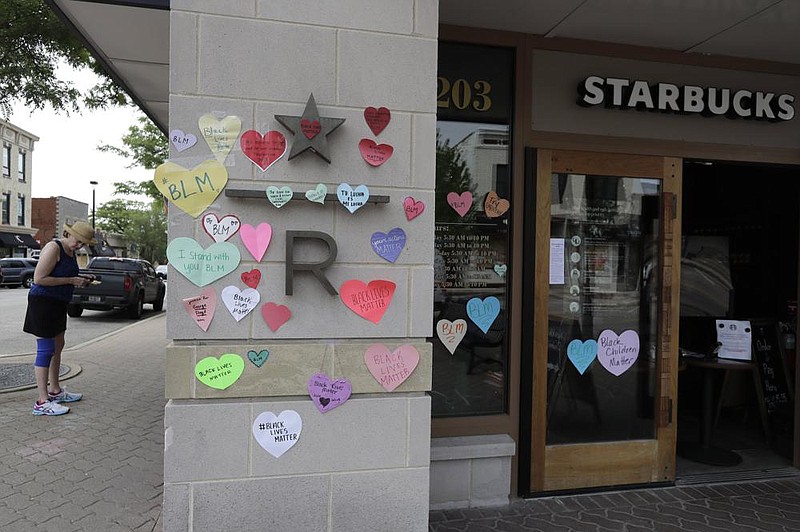 say it will pause social-media ads after a campaign led by civil-rights organizations called for an ad boycott of Facebook, saying it doesn’t do enough to stop racist and violent content. (AP/Nam Y. Huh)

A growing list of Facebook Inc.'s advertisers is set to halt spending on social media, undermining the company's sales outlook and putting its stock price under further pressure.

Starbucks Corp., Levi Strauss & Co., PepsiCo Inc. and Diageo PLC were among the most recent companies to say they're curtailing ad spending, part of an exodus aimed at pushing Facebook and its peers to suppress posts that glorify violence, divide and misinform the public, and promote racism and discrimination.

No single company can significantly dent growth at Facebook, which generated $17.7 billion in revenue last quarter alone. But a rising tally adds to pressure on other brands to follow suit, and when combined with a pandemic-fueled economic slowdown, the threat to Facebook deepens.

"Given the amount of noise this is drawing, this will have significant impact to Facebook's business," Wedbush Securities analyst Bradley Gastwirth wrote in a research note. "Facebook needs to address this issue quickly and effectively in order to stop advertising exits from potentially spiraling out of control."

As more brands publicize plans to join boycotts or otherwise rein in ad spending, Facebook shares remain under pressure. The stock tumbled 8.3% Friday after Unilever, one of the world's largest advertisers, said it would halt spending on Facebook properties this year, eliminating $56 billion in market value and shaving the net worth of Chief Executive Officer Mark Zuckerberg by more than $7 billion. Shares closed at $216.08 Friday after reaching a record $242.24 the preceding Tuesday. The company gained some of that back Monday, rising 2% to close at $220.64.

Facebook was already bracing for weakness in the second quarter, which ends this week. Chief Financial Officer Dave Wehner noted in an April earnings call the "potential for an even more severe advertising industry contraction."

The number of coronavirus cases has surged in the intervening months, prompting many parts of the country to slow or roll back reopening efforts and giving advertisers added justification to rein in marketing spending. Facebook will eke out 1% revenue growth in June, followed by a 7% increase in the third quarter, according to analysts' current projections, by far the smallest quarterly growth increase since the company went public.

Starbucks said Sunday that it would pause spending on all social media platforms while it carries out talks internally, with media partners and civil rights groups "in the effort to stop the spread of hate speech."

While some companies are targeting social media generally, including Twitter Inc., many are singling out Facebook specifically. Zuckerberg has been more reticent to put limits on discourse, notably controversial posts by President Donald Trump, saying that he doesn't want Facebook to be an arbiter of what's true.

That's prompted a consortium of civil rights and other advocacy groups, including Color of Change and the Anti-Defamation League, to urge advertisers to stop spending on Facebook-owned platforms for July to protest the company's policies.

Zuckerberg responded to the growing criticism Friday, saying Facebook would label all voting-related posts with a link encouraging users to look at its new voter information hub. The social network also expanded its definition of prohibited hate speech for advertising.

"We understand people want to put pressure on Facebook to do more," Facebook Vice President Nick Clegg said Sunday on CNN's "Reliable Sources." "That's why we made those additional announcements on Friday. That's why we'll continue to redouble our efforts, because, you know, we have a zero-tolerance approach to hate speech."

The loss of advertisers, combined with lobbying by civil rights groups, leaves Zuckerberg in a bind. He could take further steps to curtail harmful content, but that risks alienating free-speech advocates and supporters of Trump who have argued that Facebook is censoring political discourse and suppressing conservative voices.

He could also stand pat on a bet that this advertising pause will be short-lived, as with social media ad boycotts in the past. But this exodus is distinct, Bernstein Securities analyst Mark Shmulik wrote in a research note Saturday. There's heightened pressure to publicly demonstrate that brands stand with civil rights groups, he said.

"The current environment is very different," Shmulik wrote. "It is very visible who is and isn't participating in the boycott where brand silence (equals) being complicit."

While major brands like Unilever and Coca-Cola have garnered most of the headlines, the vast majority of Facebook's 8 million advertisers are small businesses, many of which rely heavily on Facebook advertising for sales. Some in the ad industry don't believe that these businesses, particularly those in commerce and direct-to-consumer sales, can actually afford to halt spending.

"Pulling off for a whole month would really hurt their business," Deutsche Bank analyst Lloyd Walmsley said. "It's a lot to ask for."