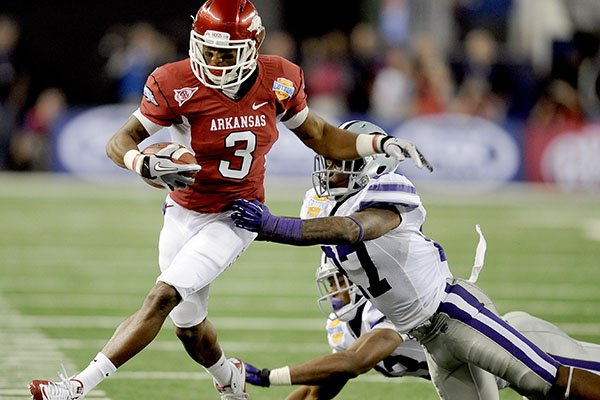 Joe Adams is at his high school home again.

Before he electrified University of Arkansas football fans, Adams stood out on Mustang Mountain for Central Arkansas Christian in 2006 and 2007.

Adams was one of the state's top football players when he was at CAC, and his play helped lead him to Arkansas, then into the professional ranks.

But Adams is back at CAC, a North Little Rock private school, as a full-time assistant coach, coaching wide receivers and cornerbacks for Coach Tommy Shoemaker and the Mustangs. Adams, 30, had worked as a volunteer coach for the past five years, but when an opening came on CAC's staff after Zac Stewart left for Nashville, he applied and accepted the position.

Four weeks into summer workouts it's clear Adams is enjoying being in a familiar spot.

Shoemaker has enjoyed working with Adams.

"It's working out really well," Shoemaker said. "He has a lot of experience playing. He's a real good teacher."

Adams rushed for 815 yards and 10 touchdowns and had 770 receiving yards and 12 scores as a senior in 2007, leading the Mustangs to the Class 4A semifinals.

The biggest adjustment for Adams, who had transferred from Little Rock Parkview to CAC, wasn't on the field.

"At Parkview, there were more Black people," Adams said. "It was the opposite at CAC. But I had to learn to not be comfortable and learn the types of people I was around.

"It helped me in the long run."

Leading up to national signing day in February 2008, Adams had orally committed to Southern Cal. However, on signing day, Adams announced that he was signing with the Razorbacks and new coach Bobby Petrino, whose offensive philosophy impressed him.

While at Arkansas, Adams became one of the best punt returners in program history.

In 2011, he won the inaugural Johnny "The Jet" Rodgers Return Specialist Award and was also named SEC Special Teams Player of the Year. Adams also earned a first-team nod on the All-SEC team. He returned 19 punts for 321 yards (16.9 yards per return) and a nation-high 4 touchdowns as Arkansas finished 11-2 and earned a victory in the Cotton Bowl.

From 2008-11, Arkansas played in three bowl games (Liberty, Sugar and Cotton), and the 2008 signing class with players such as Adams, Tyler Wilson, Jarius Wright, Greg Childs and Chris Gragg was a big reason why the Razorbacks were successful, Adams believed.

"We had a chance to go different places," Adams said. "But the big part for us was that kids in this state look up to you. You want to keep the kids in state. We wanted to put Arkansas back on the map."

Adams was selected in the fourth round with the 104th pick of the 2012 NFL Draft by the Carolina Panthers. He never played in a regular-season game with the Panthers after being waived during the preseason.

Also, Adams signed with the Houston Texans in 2014 before being released before the regular season. Adams had stints with the CFL's Edmonton Eskimos (2014) and BC Lions (2016), but never played in a regular-season game.

The Texas Revolution of the Champions Indoor Football League signed Adams in 2016, and he played for the team for two seasons.

But in 2018, Adams left professional football to focus on private training and a coaching career.

Over the past three years, Adams has helped trained Wright, currently a free agent, as well as K.J. Hill, the former North Little Rock standout who was drafted by the Los Angeles Chargers in April.

Having a former star player at CAC as well as someone who starred in the SEC could be beneficial for CAC's current players, Shoemaker said. When he was a volunteer coach, Adams sometimes played scout team quarterback in drills and is expected to do so again this season.

"I tell our players, if you can two-hand touch Joe, you can tackle anybody else," Shoemaker said.

When asked what his goals are long term as a coach, Adams said he's focused on the present.

"I want to get my feet wet and learn from the coaches here," Adams said.

CAC finished 8-4 last season and advanced to the Class 4A second round, where it lost at eventual Class 4A state champion Joe T. Robinson. Adams said he's looking forward to the 2020 season and working with the Mustangs.

"We've lost some good players," Adams said. "We've got some young guys who'll have to step up. You just have to take it day by day."

Shoemaker never coached Adams at CAC but knew of him when he coached at Harding Academy in Searcy. But Shoemaker, who has been at CAC since 2008, knows of Adams' legacy with the Mustangs and hopes he can add to it as a coach.