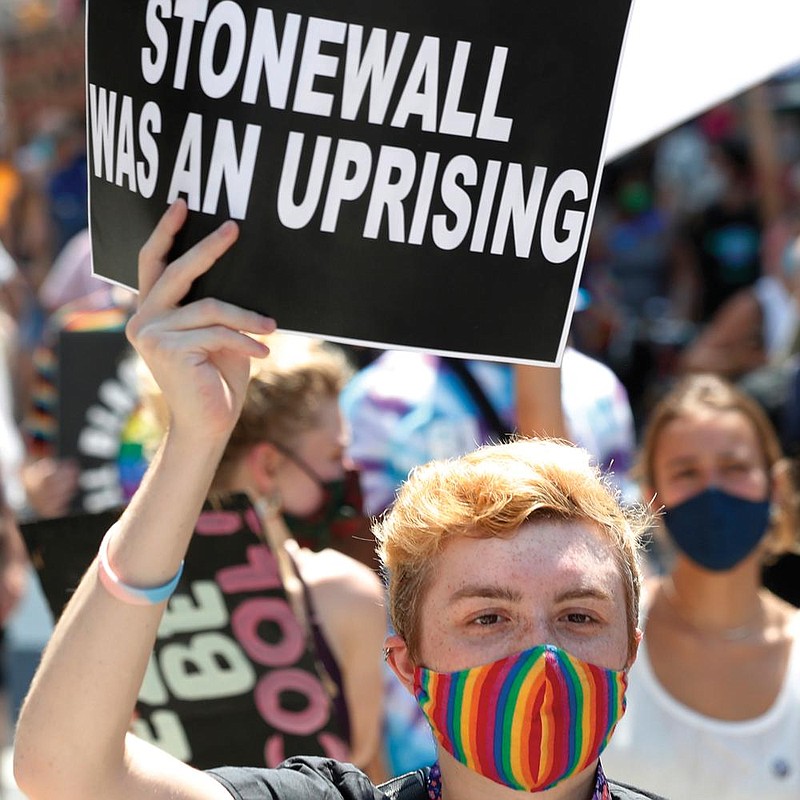 A person holds up a sign Sunday referencing the Stonewall Inn, known as the birthplace of the gay- rights movement, on the 50th anniversary of the first Pride march in New York City. The city’s parade was canceled because of the coronavirus, and this year’s events took on a different form, with a number of people showing solidarity with the black community in the fight against racial injustice. More photos at arkansasonline.com/629pride/. (AP/Kathy Willens)

The world surpassed two sobering coronavirus milestones Sunday -- 500,000 confirmed deaths, 10 million confirmed cases -- and hit another high mark for daily new infections as governments that attempted reopenings continued to backtrack and warn that worse news could be yet to come.

"Covid-19 has taken a very swift and very dangerous turn in Texas over just the past few weeks," said Gov. Greg Abbott, who allowed businesses to start reopening in early May but on Friday shut down bars and limited restaurant dining amid a spike in cases.

[Video not showing up above? Click here to watch » https://www.youtube.com/watch?v=nAvzLngg1MQ]

Abbott appeared with Vice President Mike Pence, who cut campaign events from upcoming visits to Florida and Arizona because of rising virus cases in those states.

Pence praised Abbott for both his decision to reopen the state and to roll back the reopening plans.

"You flattened the curve here in Texas ... but about two weeks ago something changed," Pence said.

Pence urged people to wear masks when unable to practice social distancing. He and Abbott wore masks as they entered and left the room, taking them off while speaking to reporters.

In Florida, more beaches will be closing, as Gov. Ron DeSantis said interactions among young people are driving a surge.

[Video not showing up above? Click here to watch » https://www.youtube.com/watch?v=QGXF-v5UD3o]

"Caution was thrown to the wind, and so we are where we are," DeSantis said.

California Gov. Gavin Newsom rolled back reopenings of bars in seven counties, including Los Angeles. He ordered them to close immediately and urged eight other counties to issue local health orders mandating the same.

But in Hawaii, the city of Honolulu announced that campgrounds will reopen for the first time in three months with limited permits to ensure social distancing.

In Washington state, Gov. Jay Inslee put a hold on plans to move counties to the fourth phase of his reopening plan.

Inslee expressed frustration at President Donald Trump's unwillingness to wear a mask or to do more to encourage his supporters to wear them. "Instead of tweeting the other day about the importance of masks, he tweeted about monuments," Inslee said on the CBS program "Face the Nation." "We need a president who will care more about living Americans and less about dead Confederates."

House Speaker Nancy Pelosi, in an appearance on the ABC program "This Week," said she supported a federal mandate that all Americans must wear masks. "Definitely long overdue for that," said Pelosi, D-Calif. She urged Trump to start wearing one in public, saying: "Real men wear masks. Be an example to the country."

Health and Human Services Secretary Alex Azar, however, defended the fact that Trump has rarely worn a mask in public, saying he doesn't have to follow his own administration's guidance because as a leader of the free world he's tested regularly and is in "very different circumstances than the rest of us."

Addressing spikes in reported cases in some states, Azar said on NBC's "Meet the Press" that people "have to take ownership" of their own behaviors by social distancing and wearing masks if possible.

Of the global death toll of half a million people that Johns Hopkins University researchers reported Sunday, about 1 in 4 of those deaths -- 126,000 -- have been reported in the U.S.

Similarly, of the more than 10 million confirmed cases globally, about a quarter of them have been reported in the U.S.

The true death toll from the virus, which first emerged in China late last year, is widely believed to be significantly higher. Experts say that especially early on, many victims died without being tested.

The World Health Organization announced another daily record in the number of confirmed cases across the world -- topping 189,000 in a 24-hour period.

In New York state, once a global epicenter, five people died from the coronavirus Saturday, the lowest daily death toll there since March 15. At the state's peak in April, nearly 800 people were dying each day.

"We are on the exact opposite end," Gov. Andrew Cuomo said in an interview on "Meet the Press."

New York still leads the nation in deaths with nearly 25,000, according to the state's tally, which doesn't include people who probably died of the disease.

The governor cautioned that the numbers could spike again if New Yorkers let their guard down and fail to follow social distancing and mask-wearing requirements.

"I'm now afraid of the spread coming from other states, because we are one country and people travel," Cuomo said. "I'm afraid the infection rate in the other states will come back to New York and raise that rate again."

New York Cardinal Timothy Dolan on Sunday celebrated the first public Mass at St. Patrick's Cathedral since the pandemic began, though it was was limited to 25% capacity and physical-distancing guidelines were in force.

Dolan thanked the congregation for its perseverance and joked that more than a dozen collections would be taken to make up for the missed Sundays.

"Where have you all been these last 14 weeks?" Dolan said. "Am I ever happy to see you."

As Pence and Azar continued to assert that reopenings in many states were not causing the sharp rises in coronavirus cases, but rather that increased testing was uncovering more and more infections, their position was disputed by other public health experts -- who said broadened testing is revealing not only more total cases, but also a higher rate of positive cases.

Cuomo said of the Trump administration: "They're basically in denial about the problem. They don't want to tell the American people the truth."

On "Fox News Sunday," Dr. Thomas Frieden, former head of the Centers for Disease Control and Prevention, said that both the total number and the percentage of positive tests had increased in several states, saying, "There's also no doubt that the virus has the upper hand." He predicted that the explosive spread in some states would continue to worsen over the coming weeks.

Pence, on "Face the Nation," said, "I know there's a temptation to associate the new cases in the Sun Belt with reopening," but he denied that to be true, adding that many states with increased cases had already reopened weeks ago.

Confronted with the concerns of health experts that states had opened too early, Pence replied, "I beg to differ."

The vice president also downplayed the seriousness of the increase in new cases by saying that the virus had predominantly infected younger people, who are less likely to be hospitalized.

But Frieden noted that it took time for patients who felt sick to be hospitalized and potentially die, and said infections in younger people were still a significant threat.

"What starts in the young doesn't stay in the young," he said. "Younger people have parents, uncles, nephews. We're going to see increasing spread."

Even as residents in some states have been turned away from testing sites that have reached capacity, Pence insisted that anyone who wanted to be tested for the coronavirus could be tested.

"Because of the public-private partnership that President Trump initiated, we are literally able to test anyone in the country that would want a test who comes forward," Pence said.

Trump first made this claim in March, and top health experts have repeatedly contradicted it. Testing sites in several states, including Texas, Florida and Arizona, have been overrun.

Azar also sought to reassure the public that there would be enough protective gear and hospital capacity for patients, including ventilators. Accounts to the contrary are emerging in new hot spots like Houston.

He disputed reports last week by members of the American Medical Association that physicians and hospitals, particularly those in Hispanic communities, still did not have sufficient personal protective equipment. "With all respect to the AMA, they don't have the information we have," Azar said. "We are literally on the phone with hospitals every day."

Reopening in various cities and states will work, he said, if people use face coverings in settings where they cannot practice social distancing. He blamed "inappropriate individual behavior" for spreading the virus.

• Britain's government is considering whether a local lockdown is needed for the central English city of Leicester amid reports about a spike among its Asian community. It would be Britain's first local lockdown. "We have seen flare-ups across the country in recent weeks," Home Secretary Priti Patel told the BBC on Sunday.

• Despite the pandemic, Polish voters were casting ballots, in person and by mail, in a presidential election. And French voters were choosing mayors and municipal council members in Paris and 5,000 other towns and cities in elections held under strict hygiene rules.

• Italy honored its dead Sunday evening with a requiem concert in hard-hit Bergamo province. The ceremony in the onetime epicenter of the European outbreak came a day after Italy registered the lowest daily tally of deaths in nearly four months -- eight people.

• German authorities renewed a lockdown in a western region of about 500,000 people after about 1,300 slaughterhouse workers tested positive.

• In Switzerland, there were new clusters of cases linked to a nightclub.

• Africa's confirmed cases continued to climb to a new high of more than 371,000, including 9,484 deaths, according to figures released Sunday by the African Centers for Disease Control and Prevention. South Africa's health minister warned that the country's surge is expected to rapidly increase in the coming weeks and push hospitals to the limit.

​​​​​Information for this article was contributed by Nicole Winfield, Ken Moritsugu and staff members of The Associated Press; and by Chris Cameron and Sheila Kaplan of The New York Times. 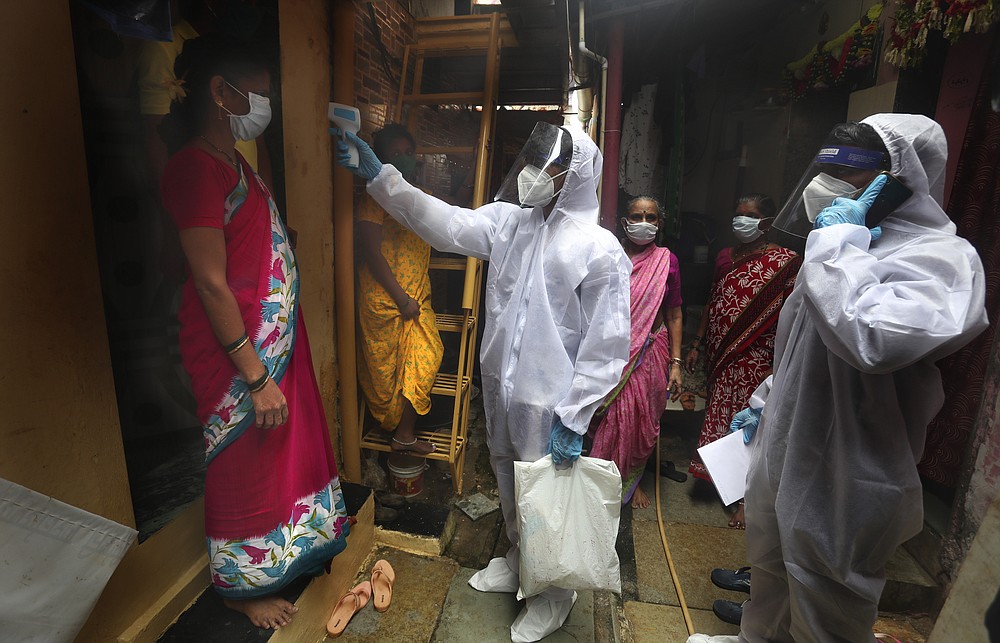 A health worker checks the body temperature of a resident, as others await their turn during a free medical checkup in a slum in Mumbai, India, Sunday, June 28, 2020. India is the fourth hardest-hit country by the COVID-19 pandemic in the world after the U.S., Russia and Brazil. (AP Photo/Rafiq Maqbool) 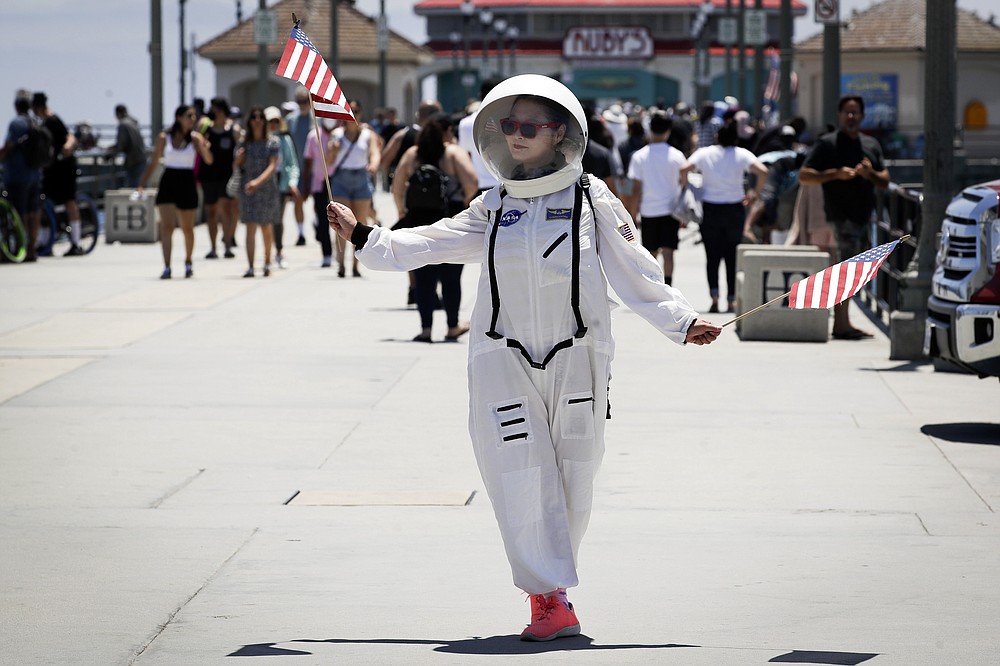 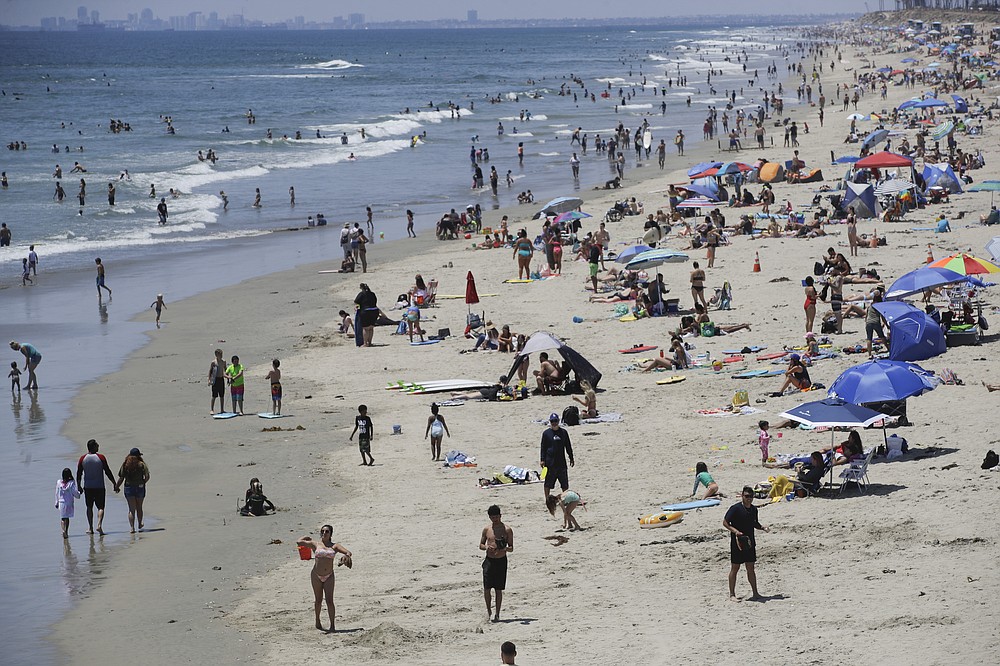 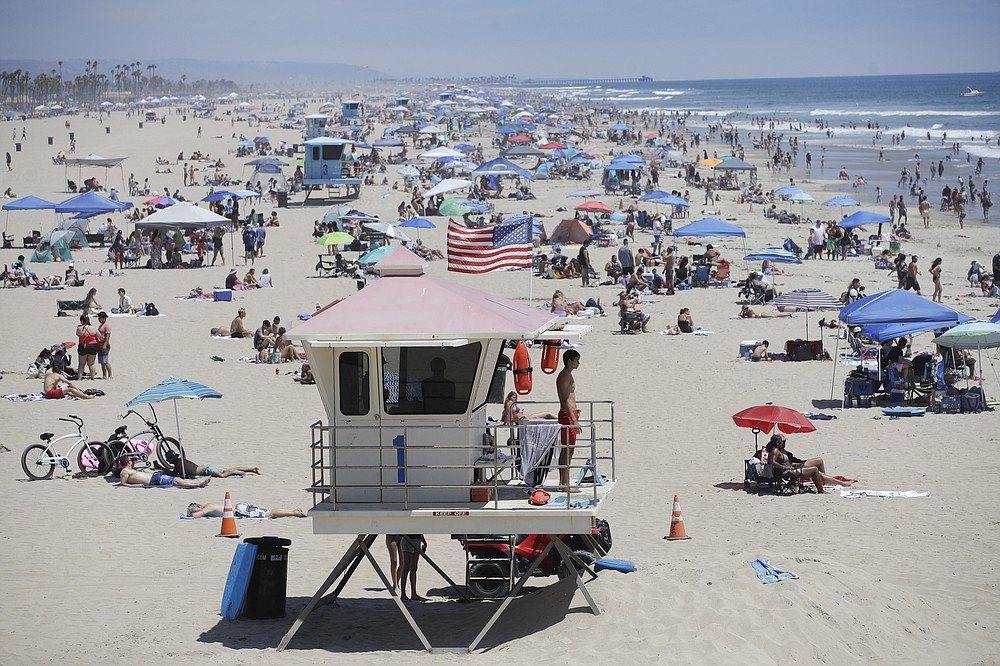 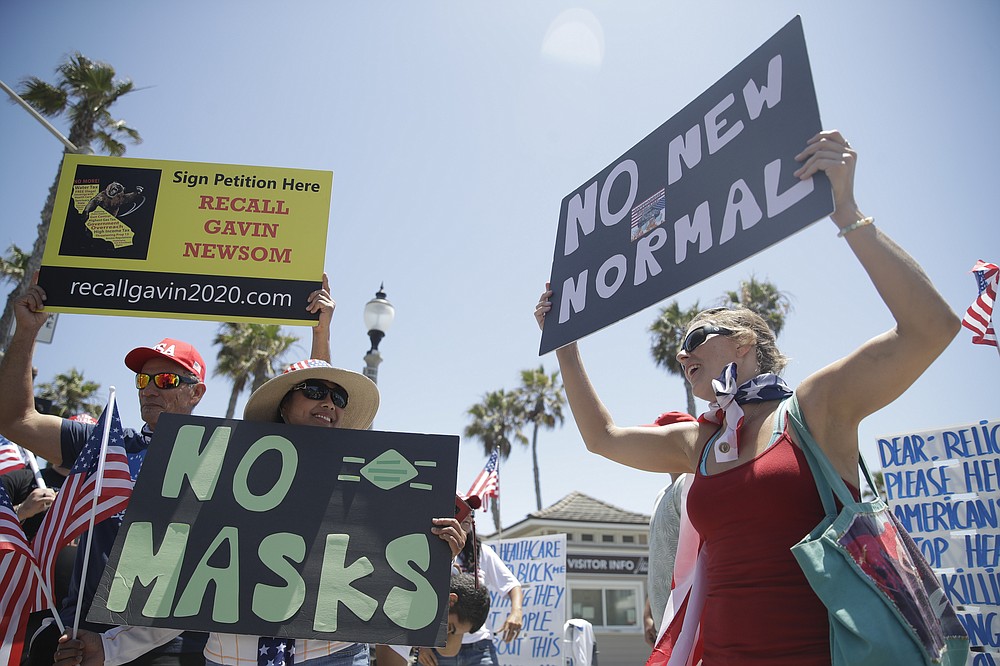 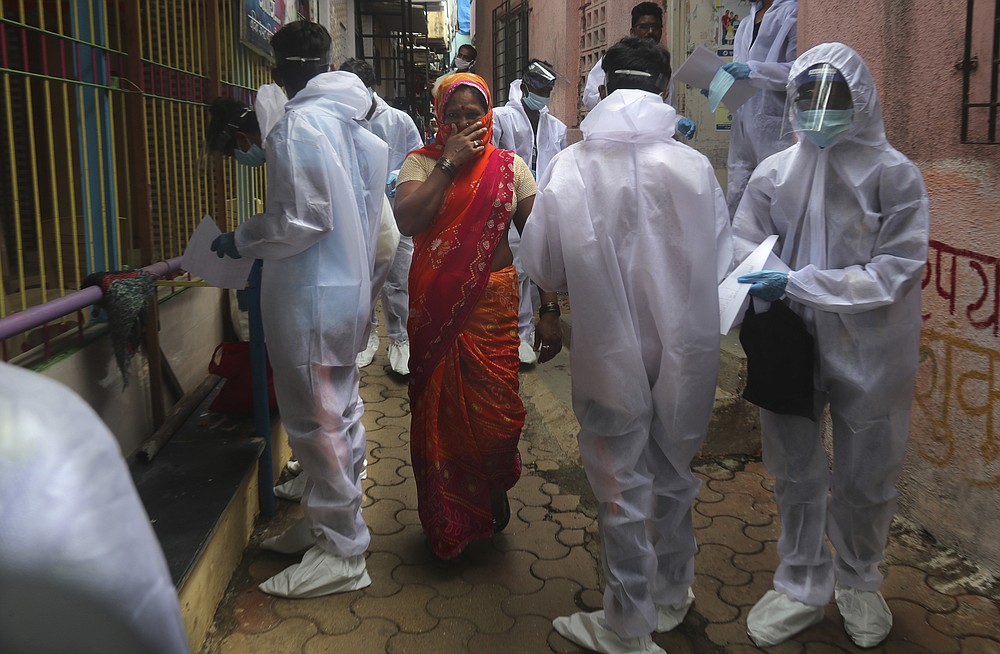 A woman covers her face as she walks past health workers arriving to administer a free medical checkup in a slum in Mumbai, India, Sunday, June 28, 2020. India is the fourth hardest-hit country by the COVID-19 pandemic in the world after the U.S., Russia and Brazil. (AP Photo/Rafiq Maqbool) 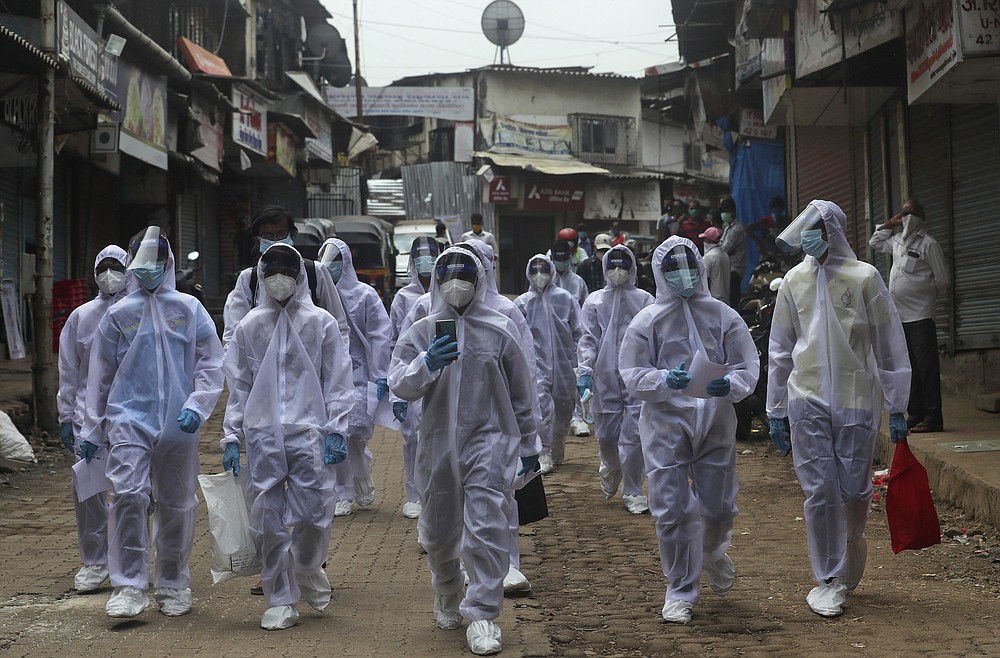 Health workers arrive to administer a medical camp in a slum in Mumbai, India, Sunday, June 28, 2020. India is the fourth hardest-hit country by the COVID-19 pandemic in the world after the U.S., Russia and Brazil. (AP Photo/Rafiq Maqbool) 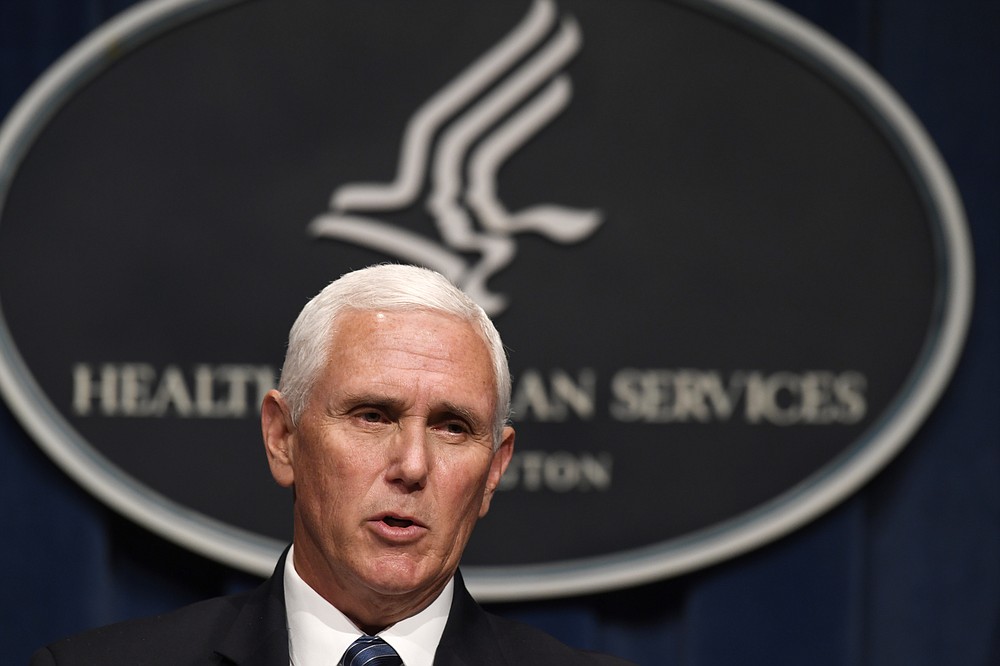 Vice President Mike Pence speaks during a news conference with the Coronavirus task force at the Department of Health and Human Services in Washington, Friday, June 26, 2020. (AP Photo/Susan Walsh) 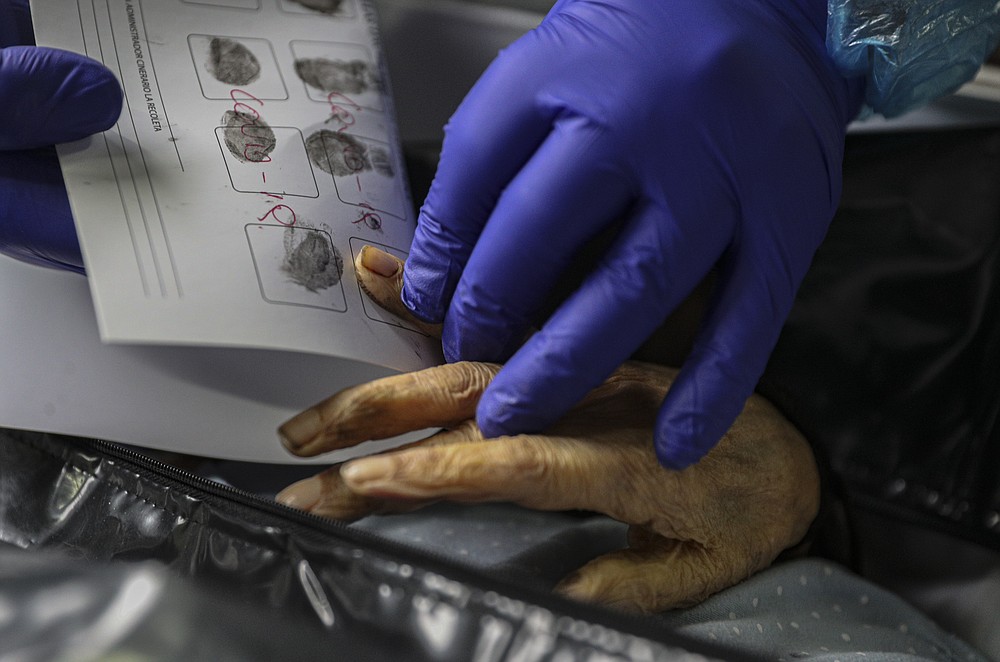 An employee takes the fingerprints of a woman who died from the new coronavirus before her remains are cremated at La Recoleta crematorium in Santiago, Chile, Saturday, June 27, 2020. The Ministry of Health reported on Saturday the highest number of deaths in Chile since the start of the pandemic. (AP Photo/Esteban Felix)
ADVERTISEMENT