When life gives you lemons ... make a movie 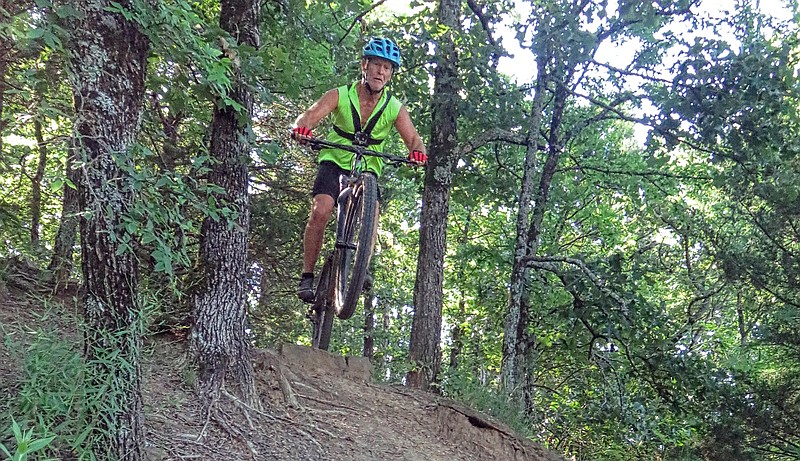 Bob Robinson videotapes himself while biking the fast downhill sections of Ben Geren Park's bike trails at Fort Smith as part of his "covid-19 lockdown project," making a movie to enter in a contest. (Special to the Democrat-Gazette/Nancy Raney) CORRECTION: An earlier version of this caption misspelled Ben Geren Park.

In the early period of the covid-19 lockdown, many people chose to occupy their time in the sanctuary of their homes binge-watching entire seasons of TV shows. However, as the shutdown stretched on, we discovered we could only watch so much television.

Puzzles and board games became a popular pastime for some. Others, unable to use their local fitness center and not wanting to join the club of "The Quarantine 15" (those gaining 15 pounds during the shutdown), ordered home workout equipment or bought a bicycle.

Eugene Kersh, owner of Champion Cycling in Fort Smith, said bicycles had become the new toilet paper. His and other shops across the country exhausted their inventory. People decided cycling would be a healthy way to practice social distancing while getting in a workout and enjoying the great outdoors. Plus, it was something the entire family could do.

Yet others challenged themselves to learn a language (to use on vacation later) or to play the flute they have had in their closet for who knows how many years.

My covid-19 quarantine project began when I was texting with my friend Dr. Brandon Chase Goldsmith and he asked, "Are you going to enter the HOMEVID-19 Video Contest?"

Goldsmith immediately terminated the text messaging to call me on the phone. He is passionate about film production. His interest dates to high school, when he talked his English teacher into allowing him to submit a term paper as a film rather than print. More recently he wrote and produced the 2018 play "The Western District" about corruption at Fort Smith in the 1870s, and he is adapting the play as a documentary film.

I told him I did not know anything about film making, and even if I wanted to enter the contest, I did not have the equipment to put a film together. He said, "You have everything you need to make a quality film right in the palm of your hand."

He had just taught a course at the University of Arkansas, Fort Smith titled "Making Movies With Your Phone."

He said today's smartphones are like a full production studio. You can record, edit and produce a screen-ready film with a phone.

I was running short on excuses for not accepting his challenge. The final blow fell when he stated the obvious: "It's not like you don't have the time to do it, what with everything shut down right now."

THE MAKING OF A VIDEO

My first step into the world of film production was to sign onto the ­"HOMEVID-19 Video Contest" website and choose the category for my masterpiece.

Comedy: Maybe. Some people laugh at my jokes.

Under 17: I just missed that cutoff.

Pets: I could adopt a pet. During the pandemic, pet adoptions have skyrocketed. I would be guaranteed a large audience. I might come back to this.

I had my category, now what to film?

Too bad I hadn't known about this opportunity earlier, I could have adapted "White Knuckles, White Water: Cossatot River Rafting" to the big screen. (But I did not.)

As I sat at my desk, peering out the window at Ben Geren Park's dense green forest, it came to me. I would film the mountain bike trails that snaked through those trees. My topic was literally in my backyard.

And I would not just record riding the trails. After all, this was supposed to be an action film. I would film only the fast-downhill sections.

This video project was going to be easy. I could have the filming done before lunch.

Then I encountered my first obstacle. How was I going to hold my phone while speeding downhill, let alone while I went over the jumps?

I remembered a time when I had wanted to make a video while sledding down a hill and I taped my phone to my hat. It worked pretty well, but I didn't really want to take that chance with my new iPhone 11 Pro. No, I needed a smarter solution. The search began.

A GoPro camera seemed the obvious choice; however, I did not want to spend $200. But the AKASO EK7000 Sports Camera at $49 was within my film-production budget.

For another $20, I could purchase a version that included electronic image stabilization. There would be a lot of bouncing around during my action video, so I felt I probably should spring for the extra expense. And for another $15, they would include a microSD Card. What good is a camera without a memory card?

I justified the $85 by thinking I could use the camera for my freelancing career. The Arkansas Democrat-Gazette could embed my videos. Besides, Goldsmith told me that The River Valley Film Society, of which he is the president, was planning a film festival. Maybe I could use the new camera to create a film to enter in that, too.

With a press on the Enter key, my new camera was on its way.

I took advantage of the wait for delivery to research how to use it. There is no better place for do-it-yourself training than YouTube University.

Knowing that, by the time the camera came, I would have forgotten everything after "Press the On button," I took detailed notes to carry "on location."

Just when I thought I might get this film thing down, I encountered obstacle No. 2.

Googling how to edit my video, I saw that most of the editing software it works with ran on Apple devices. All my programming and software experience has been on Microsoft platforms (and also IBM mainframe and UNIX). I own an iPhone and an iPad, but ownership was the extent of my Apple experience.

It was time to learn to use my "full production studio."

Back at the University, I found a recording by a 13-year-old girl who showed me how to transfer video from a phone to an iPad, this via Wi-Fi and an app called iSmart DV.

Next would be editing the video once it was on my ­iPad. Goldsmith recommended iMovie, so I downloaded the app on my iPad. Then, after watching another YouTube video, I began practicing with iMovie.

The apps I downloaded were free, thank goodness, because buying the camera already put my production over budget.

My camera finally arrived, and it was beautiful. Referring to my notes from the training video, I turned it on, and my film career officially began. I jostled the camera while filming, and the stabilizer worked perfectly.

The camera came with six mounting brackets and assorted other pieces of equipment that I had no idea what to do with.

Using one of the mounts, I attached the camera to my helmet, and out the garage I rode with the camera rolling. After weaving in and around trees, then across a narrow bridge over a creek, I stopped to view my creation.

Hmm, it didn't quite capture what I was expecting. I tilted the angle of the camera down and tried it again.

When I returned home and viewed it on the iPad, it was cool to see the image weave through the trees on the tight, narrow trail, but something was missing.

I found several reasonably priced harnesses online, but with the deadline for contest entries less than a week away, there wasn't time to order one.

Back to the University to ask, "How to make a GoPro chest mount?"

A five-minute video taught me to make my chest harness, at a total cost of less than $5 for a package of locally available Velcro straps. 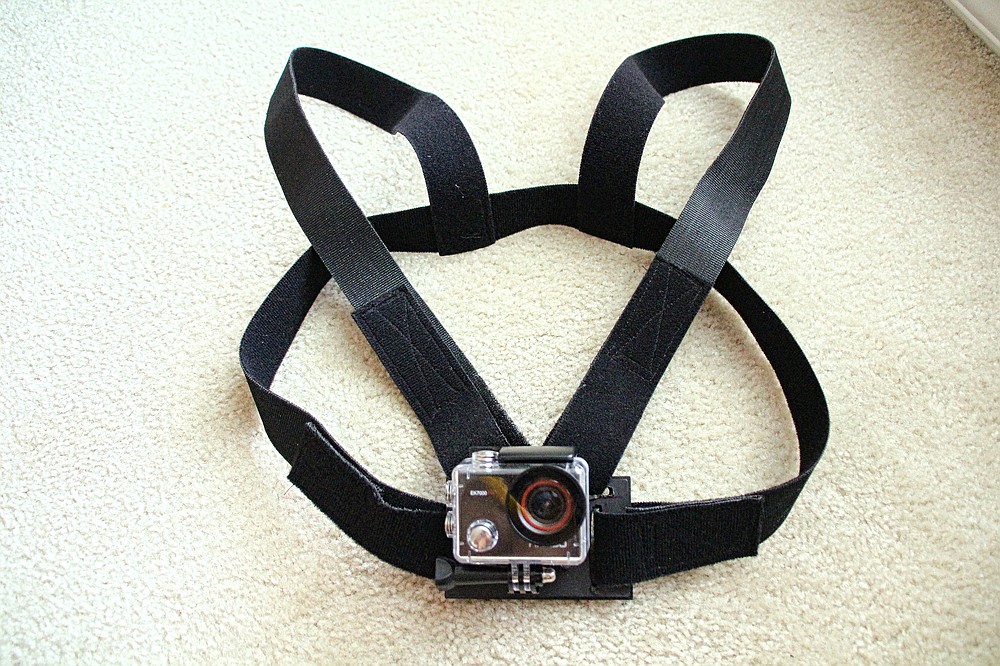 Bob Robinson wore this homemade harness and the AKASO EK7000 Sports Camera attached to it to shoot his award-winning movie. (Special to the Democrat-Gazette/Nancy Raney)

Fast forward a few hours and — "Take 2" — I was back on the trail videoing my ride. Even viewing the image on the AKASO EK700's tiny screen, there they were, handlebars and my bright red gloves. Perfect.

After several descents on the Ben Geren trails, I returned home for the production side of film making.

With training videos for using iMovie displayed on my PC monitor sitting next to me, I worked through cutting and splicing my videos on my iPad, enjoying every minute. When the training video demonstrated how to slow down the video, I experimented with slowing the action where I had grabbed air on the jumps.

Wow! That captured the thrill cyclists experience becoming airborne on the jumps.

After viewing the film over and over again, tweaking it here and trimming it there, I was bored with listening to my grunts and the crunching of the bike over rocks and even its impact with the ground after a jump. My creation needed background music. iMovie includes background tracks, but I wanted original music.

I called another friend, Tom Ware, musician, singer, songwriter, multi-instrumentalist, producer, soundman extraordinaire and consummate music-guru in every conceivable manner. With all the music venues shut down due to the pandemic and having time on his hands, he said, yes, he would put together a soundtrack for my video. It would give him a chance to use some sound-dubbing software he owned but had never had the time to learn to use.

With Ware's background track melded with the film, my creation was complete. I submitted "Roller Coaster Ride, River Valley Style."

Three weeks later, Goldsmith and Fort Smith Mayor George McGill arrived at my doorstep to present me the award for "Best Action Video." 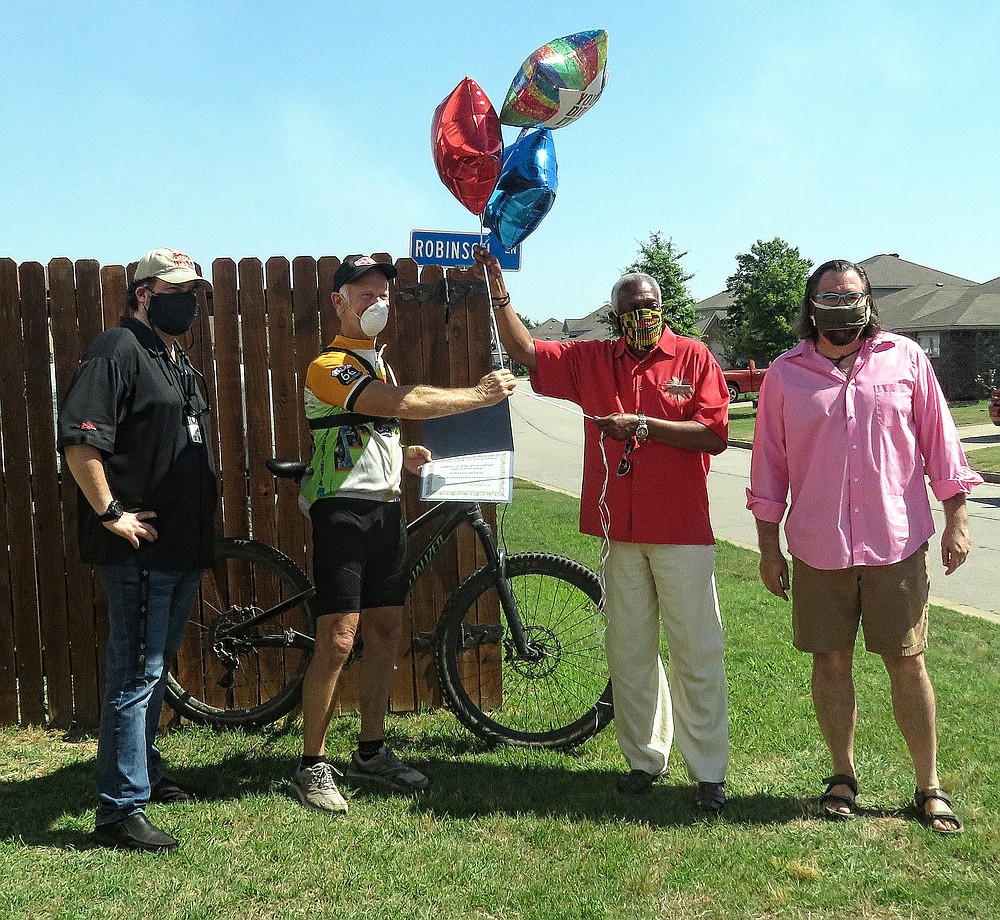