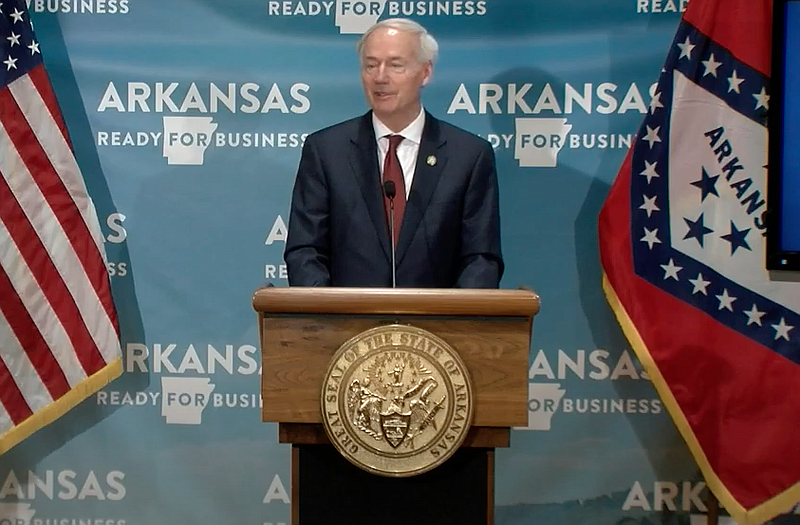 Arkansas Gov. Asa Hutchinson speaks to reporters at the state Capitol in Little Rock on Monday in this still of video provided by the governor's office.

Arkansas topped 20,000 confirmed cases of covid-19 on Monday, a milestone that reflected the speed of the virus' spread through the state in recent weeks.

After the first coronavirus patient was identified in Pine Bluff on March 11, it took nearly three months for the state to identify the first 10,000 cases. That number then doubled in less than three weeks.

There have been 265 deaths attributed to the virus, an increase of one since Sunday.

On Monday, Gov. Asa Hutchinson announced that 439 new cases of the virus had been identified over the previous 24 hours, which he noted was a decrease from new cases announced over the weekend. Hospitalizations, meanwhile, increased by seven to 300.

Arkansas Health Secretary Nate Smith said that the number of active cases statewide were“plateauing” as the number of new cases roughly matched the number of daily recoveries. Still, he expressed concern that cases were on the rise around Little Rock, even as numbers were falling in the northwest region of the state, which has been hit hardest over recent weeks.

“Although we haven’t had an explosive increase in cases we’re going to have to be very vigilant in this central part of the state because that’s our most densely populated portion of the state,” Smith said.

Hutchinson also chided some Arkansans for what he described as poor behavior documented on social media over the weekend, where images were posted of dozens of unmasked people gathering at a bar and along a river in Northwest Arkansas.

The governor said he would be delivering “words of encouragement” ahead of the upcoming Fourth of July holiday, and that Alcoholic Beverage Control officers would be assisting the Health Department in enforcing guidelines over the weekend.

The total number of coronavirus cases reported in Arkansas remained at 19,818 Wednesday morning, according to a state website. The death toll remained at 264.

[Video not showing up above? Click here to view » https://www.youtube.com/watch?v=uC6i7wDA6AE]