WATCH YOUR LANGUAGE! Digging up the odd roots of vegetable names 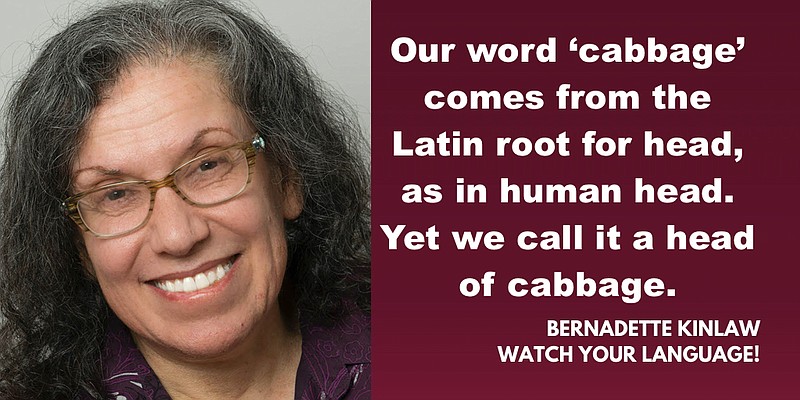 I didn't get around to planting a garden this spring, so I've been reading wistfully about vegetables and fruit online. How lame is that?

I started with my favorite vegetable on earth: the eggplant. And it turns out it's a fruit, not a vegetable, which is beyond my comprehension.

I've always thought the name was weird. It doesn't look like any egg I ever scrambled. Eggplant reached Europe from Asia by the ninth century. I guess it didn't get named for a while. But when the Europeans named it in the 18th century, it was because their iteration of eggplants were whitish and were about the size of goose eggs.

The name for cabbage comes from the Latin root for "head," as in a human head. Yet we call it a head of cabbage. So, it's a head of a head.

The carrot's name has both Greek and Latin roots (Get it? Roots!) reflecting its horn shape.

The carrot was white in ancient times. It was fostered in the Netherlands in the 16th century to be orange. So, it wasn't until after then that redheaded people were called carrottops. This doesn't make a lot of sense, though, considering the tops of the carrots are green and leafy.

The herb basil's name comes from the Latin and Greek roots for "royal plant." It might have been used to make royal perfume. Mmm. Who doesn't love a person who smells like tomato sauce?

The origin of "turnip" started me down this garden path. Its name likely came from the word "turn," because the edible root looked like something turned on a lathe. And now I've learned that the lathe is an ancient tool, dating back to 1300 B.C.

Lettuce, the edible leaves of which we use in salads and elsewhere, took its name from "lactuca," the Latin word for milk. This seems odd. The etymology people say it was so-named because of the milky juice of the plant. I just went to my fridge, opened a bag of romaine lettuce and snapped a leaf. I detected no milky juice.

The apple began as a nonspecific fruit. The Old English "æppel' meant simply fruit. Dates were called "finger apples." An early word for a cucumber was one meaning "earth apple." Similarly, "pomme" is French for apple, but "pomme de terre," apple of the earth, means "potato."

Also, "melon" came from the Greek words for apple and gourd. I guess the word for apple has fallen quite far from the tree.

And squash is a word we borrowed from the American Indian word meaning raw or uncooked.

The early English settlers who moved to Virginia and New England didn't really take to the gourds until they cooked them, adding animal fat, syrup and honey. So really the food became unsquash and, I guess, sweet.

Well, this is embarrassing. After all I had to say about The Associated Press Stylebook this past week, I forgot to mention what had gotten me started.

A recent Stylebook change is that AP removed the hyphen in many of the words starting with re and followed by an e. Before, we'd used re-elect. Now, we use reelect, reemerge, reemphasize, reenlist, reengage. This is confusing to me. I read reelect as "reel-ECT," and reexamine as "reeks-AM-in."

The hyphen also comes out of words starting with pre and followed by e. So, we don't use a hyphen with preeclampsia, preestablished, preeminent, preexisting.

Knowing this revision, wouldn't it seem logical that The AP would recommend removing the hyphen from words starting with de and followed by e? It didn't. We are still supposed to use de-escalate and de-emphasize. The editors acknowledge this curiosity by saying, "No one said English makes sense ..."

Also, I need to correct something from last week's column. I wrote that the Stylebook now allows split infinitives. But the examples I used were not split infinitives. They were split compound verb forms. These were the sentences I used to illustrate the point:

Those who lie are often found out.

How has your health been?

The budget was tentatively approved.

An example of a split infinitive comes from the old TV show "Star Trek." Captain Kirk, in the intro, says the ship's mission is "to boldly go where no man has gone before." (A later version of "Star Trek" changes that to "no one" instead of "no man.")

A while back, I asked about fun Scrabble words. One reader emailed me about "jalebis." That's the plural of "jalebi," a sweet snack from India. It's made from dough like our funnel cakes, and it's soaked in syrup. That sounds good.

A COUPLE OF EGGCORNS

One person prayed in church, "Forgive us our trespasses and forgive those who trespass against us. And lead us not into Penn Station ..."

Hmm. Which is better, temptation or Penn Station?

One reader misheard the lines from "Bringing in the Sheaves." She sang:

We shall come rejoicing, bringing in the sheep

Sheaves are stalks of grass. Sheep are far cuter.

One child had an apt name for Pinocchio: "Poky the Nose."