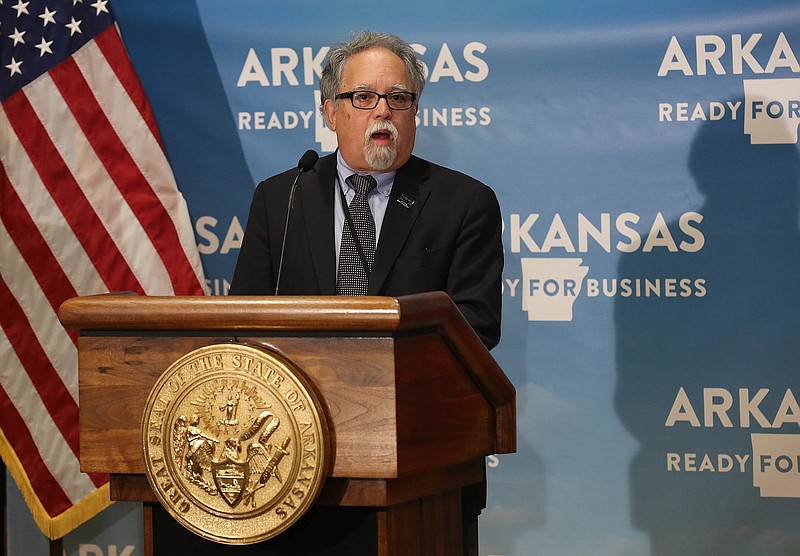 Dr. Jose Romero talks about new covid-19 cases in the state during the daily covid-19 update on Friday, June 12, 2020, at the state Capitol in Little Rock. During the briefing, Romero, the state Health Department’s chief medical officer, said that “Latinos comprised 21.2%, based on surname,” of new cases.

During Gov. Asa Hutchinson's near-daily briefings on the covid-19 epidemic in Arkansas, he and state health officials have reported case numbers in the Hispanic community based on a count of Spanish surnames -- a statistic at least one state expert calls "imprecise."

On May 28, Hutchinson said during his livestreamed briefing that growth in cases in the state's Hispanic population continued, with 42% of new cases among people with Spanish surnames.

At a June 4 briefing, state Health Secretary Nate Smith noted that half of new cases were people with Spanish surnames.

The references left some listeners and online commentators wondering about the count's accuracy: What qualifies as a Spanish or Hispanic surname? How often, or not, is a Spanish-sounding name actually linked to a Latino person? Is a Spanish surname count either accurate or official?

In an interview earlier this month, a top state Health Department official said she's not sure how that counting method started, but that it plays no part in the state's official analysis.

It's "imprecise, very imprecise," said Dr. Jennifer Dillaha, an epidemiologist at the Arkansas Department of Health.

There's a few days' lag in collecting data on ethnicity. Sometimes, that information is self-reported when a person gets a test. Other times, the Health Department has to contact people whose tests come back positive to ask for demographic details.

Because of that delay, someone at the Arkansas Department of Health has been compiling a quick statistic based on whether surnames seem to be Hispanic, to present to the press and the public, Dillaha said.

"In the end, that gets thrown out and we've only used in our data the number that are identified, self-identified as being Hispanic or Latino," Dillaha said in an interview.

"If you go on our website, what is reported is the data that is from the interviews, and that's the official way of doing it."

About the Spanish surname count, she said: "So really it's a placeholder."

Officials have said that infection rates among the Hispanic and Marshallese communities are rising in Arkansas. Nationally, people of color have been disproportionately sickened and killed by the virus. The federal Centers for Disease Control and Prevention says these groups are at exacerbated risk because of "long-standing systemic health and social inequities."

From May 23 to June 22, the Arkansas Department of Health found that 3,704 people who self-identified as Hispanic or Latino contracted covid-19. Dillaha said that, up to mid-June, the official number had averaged at about 22% of total infections.

As of Friday, the Hispanic/Latino number was 4,530, or 24% of overall infections.

About 7.8% of Arkansans are Hispanic or Latino, according to 2019 estimates from the U.S. Census Bureau. About 8% of the state's covid-19 deaths have been of Hispanic individuals, according to the department's website.

Dillaha said she didn't think the decision to use surname-based numbers was a discussion among higher-ups at the department. She didn't know who initially decided.

"It was decided to use Spanish surnames kind of as a placeholder until we can have better data, but it's confusing to the public and to the press," she said.

Many people may have Latino surnames and not be Latino. Others may be Latino and have a name that doesn't have a Latino origin.

There's also no master list of what qualifies as a Hispanic surname, no written-out method to derive that statistic, she said.

Dillaha added that the department would make changes in the way it reports that information, and that officials had gotten several questions from members of the public about whether surnames are used to determine ethnicity.

Information about race and ethnicity initially is collected on the lab request form during testing and reported to the Health Department. That data has been collected since the first case was confirmed in Arkansas in March, said Danyelle McNeill, a department spokeswoman, in an email to the newspaper.

"Often the race and ethnicity information is missing when the lab result is reported to ADH, so the patient is asked about their race and ethnicity when they are interviewed by the ADH nurse who calls" to conduct the case investigation, McNeill wrote.

She added that the law requires labs, hospitals and clinics, among other sites, to report positive cases and outlines the way in which inquiries about demographic information should be made, to ensure the information is consistent.

Arkansas United focuses on immigrants' rights and on closing service gaps across the state. The organization is part of a stakeholders group that advises the state on how to best reach the Latino community and prevent the spread of the coronavirus.

For example, in looking at the data reports, members of the group realized they needed more specific information on ethnicity of those sickened in specific geographic areas, Reith said. That way, they can flag where there should be more testing and note where there may be higher numbers.

"We knew that we were going to have to ramp up our outreach efforts," Reith said of official health data that her group receives.