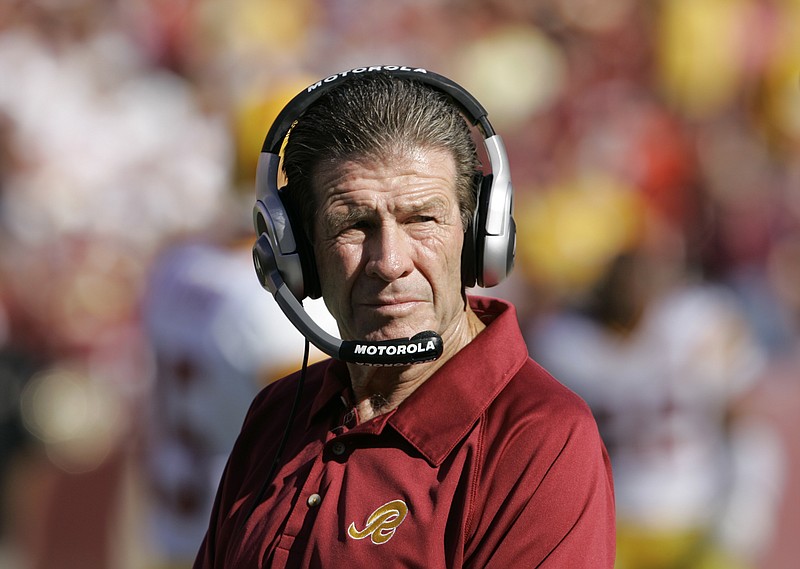 FILE - In this Sept. 23, 2007, file photo, Washington Redskins assistant head coach-offensive Joe Bugel looks on during an NFL football game in Landover, Md. Former Redskins assistant coach Bugel has died. He was 80. The team announced that Bugel died on Sunday, June 28, 2020. It did not disclose a cause of death. (AP Photo/Manuel Balce Ceneta, File)

The New England Patriots have reached an agreement with free-agent quarterback Cam Newton, bringing in the 2015 NFL MVP to help the team move on from three-time MVP Tom Brady, a person with knowledge of the deal told The Associated Press. The one-year deal is worth up to $7.5 million with incentives, the person said. A Patriots spokesman said the team had nothing to announce Sunday night. The signing was first reported by ESPN. "I'm as excited as I don't what right now!!" Newton posted on Instagram "All praise to God!! Dropping content tomorrow!! I hope you're ready!! Let'sgoPats." The Patriots had been heading to training camp with 2019 fourth-round draft choice Jarrett Stidham as the heir apparent to Brady, who led the team to six Super Bowl championships since 2001 but signed with Tampa Bay this offseason. Stidham appeared in three games last season, completing 2 passes for 14 yards with 1 interception. The only other experienced quarterback on the defending AFC East champions' roster was 34-year-old Brian Hoyer, who has started 38 games in an 11-year career with seven NFL teams, including the Patriots twice. Newton had surgery to repair a torn rotator cuff before the 2019 season. But he injured his foot in a brief appearance in the third preseason game against New England; he played only two games last season before being placed on injured reserve with a Lis Franc fracture. In nine seasons, he has completed 2,371 passes for 29,041 yards and 182 touchdowns with 108 interceptions. He has also run for 4,806 yards and 58 scores.

Former Washington Redskins assistant coach Joe Bugel, regarded as one of the top offensive line coaches in NFL history, has died. He was 80. Bugel died on Sunday, according to a statement from the team, which did not disclose a cause of death. Bugel was the architect of "The Hogs," the dominant offensive lines that helped lead the team to three Super Bowls under Hall of Fame head coach Joe Gibbs. Bugel was the team's offensive coordinator and offensive line coach from 1981-82 and became the assistant head coach in 1983, a role he had until 1989 before becoming the head coach of the Phoenix Cardinals. He returned for a second stint with the team as assistant head coach-offense from 2004-09.

Chase Briscoe held off Ross Chastain in overtime to win the crash-filled Xfinity Series at Pocono Raceway, the second of three NASCAR races at the track Sunday. Chastain and Briscoe swapped the lead in a battle down the stretch until a ninth caution flag bunched the field and sent the race into OT. Briscoe pulled away from there in the No. 98 Ford and won his fourth race of the season, and second in three races. Chastain hit the jackpot with his runner-up finish. He won the $100,000 Dash 4 Cash prize awarded to the highest finisher among four eligible drivers. Jeremy Clements was third, followed by Myatt Snider and Michael Annett. There was a big wreck just inside 40 laps remaining that collected several checkered flag contenders and shook up a staid race. Stage winners Austin Cindric and Justin Allgaier were caught up in the crash. So were Noah Gragson, Daniel Hemric and Ryan Sieg.

Brandon Jones took home a trophy and sent a car to the scrap heap in about an hour at Pocono in Long Pond, Pa. Jones won a two-lap sprint to the finish to win the wreck-filled Truck Series race. His enjoyment was short-lived -- he wrecked on the first lap of the Xfinity Series race. "It doesn't take much when you get three wide," Jones said. "We won the Truck race and I had high hopes for this race, too." The Truck race never got any momentum and dragged from start to finish because of nine caution flags and two red flags on a sloppy day of racing.

Clint Bowyer warmed up for his Cup race with a jog on track property as the Truck race started and tweeted in the waning laps, "There's a good chance I still might outrun this truck race." Bowyer might have had the longest run of the day. Christian Eckes blew a right rear tire that spun him out of the lead with 12 laps left, ending his race. The green flag came out with eight laps remaining only for the race to slow again three laps later when the whopping ninth caution of the 60-lap race bunched the field. 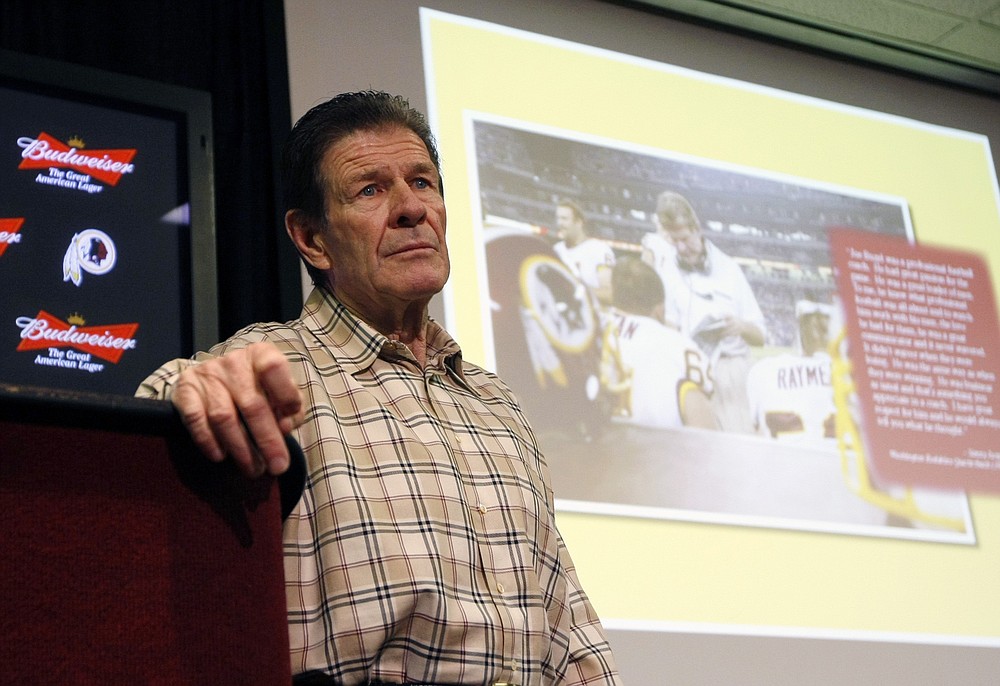 FILE - In this Jan. 13, 2010, file photo, Washington Redskins offensive line coach Joe Bugel listens to a question during his retirement news conference at Redskins Park in Ashburn, Va. Former Redskins assistant coach Bugel has died. He was 80. The team announced that Bugel died on Sunday, June 28, 2020. It did not disclose a cause of death. (AP Photo/Luis M. Alvarez, File)