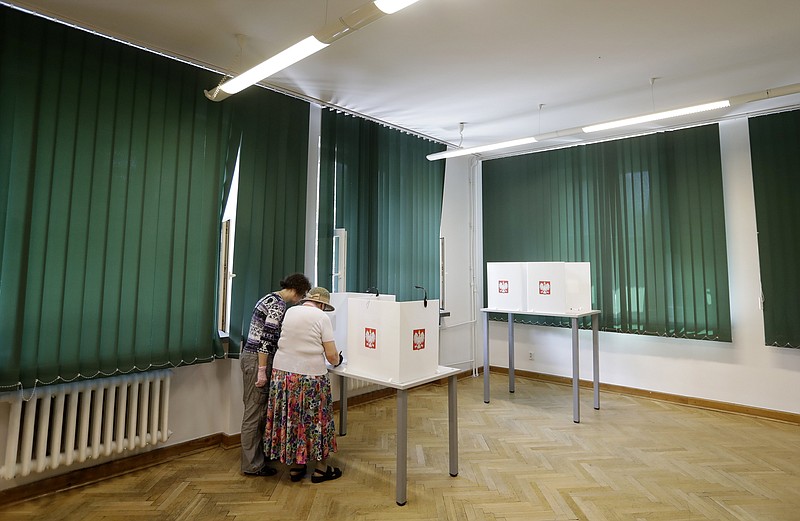 Poles turned out in droves, despite several obstacles -- sweltering heat, lingering concerns about the spread of the coronavirus and long lines as polling stations gave each voter a zone of personal space 3 feet in all directions.

Both leading candidates acknowledged that they will be in a runoff, after exit polls showed Duda receiving about 41% of the vote and Trzaskowski about 30%;although official results won't be released until today.

Nine other candidates representing a wide range of views, from the far right to the ultraliberal, were also on the ballot. Political analysts predict that most of their support will go to Trzaskowski, making the next round of voting extremely close.

In the July 12 runoff, the choice will be more sharply drawn between Duda and Trzaskowski.

Trzaskowski promises to draw the country closer to the European Union, protect the rights of the LGBT community, whose members are often targets of the government, and veto laws that he says pose a threat to Poland's democratic institutions.

"It will be the choice between an open Poland and Poland looking for an enemy," he told supporters Sunday night. Trzaskowski reached out not only to those who do not like the country's direction, but also to those who might have supported the governing Law and Justice party in the past, saying his goal was to unite the country.

Duda has attacked homosexuality as an ideology comparable to communism. His campaign was defined by singling out the LGBT community for the kind of vitriol that was directed at migrants five years ago, when immigration helped fuel the rise of populist leaders across the continent.

"I'd like to thank all my compatriots for the turnout, for the high participation in the elections," Duda said after the polls closed. He said he looked forward to meeting Trzaskowski in the runoff and was confident in his vision for Poland.

In many ways, the election was a referendum on the governing Law and Justice party, which swept to power in 2015 and set out an ambitious agenda to reshape the state. For opponents of the nationalist government, the party represents a fundamental threat to democracy and has set the country on a course already charted in Hungary, where single-party control has allowed a steady drift toward autocratic rule.

But even as old divisions defined much of the debate before the election, it played out against a different backdrop -- the pandemic.

Voting, originally scheduled for May, was postponed, and a raft of measures were put in place to ensure voters felt safe going to the polls.

Voters were told to take their own pens, masks were required, and doors remained open so people did not have to touch the handles.

Poland was one of the first nations to close its borders, and when it locked down in March, it did so completely. Military police were even dispatched to the streets to make sure people did not break the rules.

It was also one of the first nations in Europe to ease restrictions; on May 20, the mandatory order to wear masks in public was lifted. Just about everything that was open before the pandemic has reopened, including gyms, restaurants and movie theaters. So far the reopening has not led to major spikes in new infections.