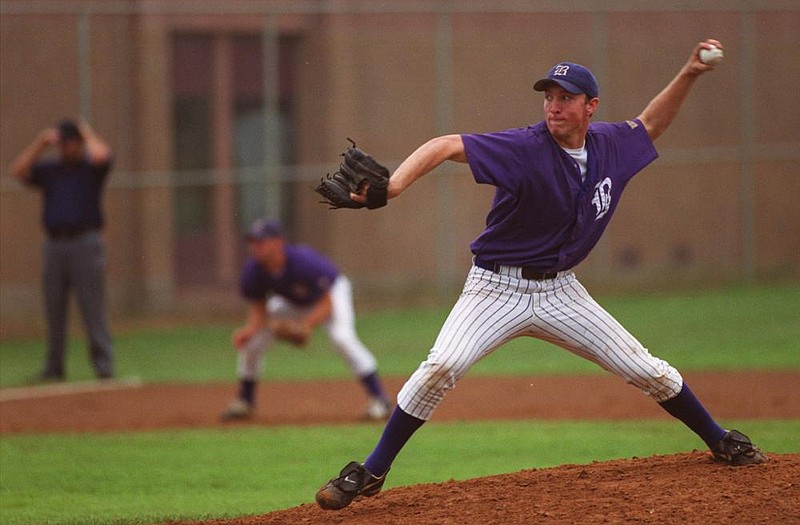 Booneville's Trey Holloway pitch led the Bearcats to a state championship in 2001 with a 12-1 record and 134 strikeouts. He also batted .531. Holloway was a two-way player at Westark College and was a key member of the Arkansas Razorbacks team that advanced to the 2004 College World Series. Holloway is also in rare company of players who won a state title and also coached a team to a state title, winning the championship as a coach at Greenwood. (File photo Arkansas Democrat-Gazette)

Trey Holloway was an all-around athlete who showed Booneville could win state championships in other sports besides football.

Booneville is known primarily for its powerful football program that has won four state championships since 1986, including in 2018 when the Bearcats went 15-0 culminating with a 35-0 victory Osceola in the Class 3A final at Little Rock. Holloway played football on a state championship team as well in 2000 for Booneville, but the Bearcats were the talk of the town in spring 2001 when they won their only state championship in baseball after beating Central Arkansas Christian 2-1 in the final game at Baum Stadium in Fayetteville.

Holloway was a two-way terror that year for the Bearcats, who finished 26-1 after losing to Clarksville in the district tournament at Clarksville. Holloway batted .531 and compiled a 12-1 record with 134 strikeouts and 0.76 earned run average. The left-hander went 3-0 in state tournament play and was selected MVP of the Class AAA state finals after throwing a complete game in the victory over Central Arkansas Christian.

“We had a lot of great senior leaders in football and baseball in my senior year,” Holloway said. “I believe that winning the state football title helped us win in baseball. I believe that success in one sport helps breeds success in another.”

Fort Smith Southside assistant football coach Brad West, who started in the outfield for Booneville’s state championship team in 2001, said the Bearcats felt invincible with Holloway on the mound.

Booneville won state championships in football and baseball and won a conference championship in track and field in the same calendar year beginning in 2000. Holloway credits much of Booneville’s success to teammates who grew up playing sports together beginning at a young age.

The boys would often gather at Trey’s parents’ house, where his father, Ger-al, a long time coach at Booneville, built a batting cage in the back yard.

“We had a tight-knit group of guys who began playing at 10- or 11-years old,” said Holloway, who also ran track in addition to playing football, basketball, and baseball in high school. “That was before travel ball, when we all played for Booneville and it carried on all the way through high school.”

Holloway had a successful career as a player and coach before leaving Greenwood High School in 2018 to spend more time with his wife and three young boys, who all play baseball. Holloway played one season at Westark Community College (now Arkansas-Fort Smith) before transferring to Arkansas, where he played for three years and helped the Razorbacks reach the College World Series in 2004. Holloway received a medical redshirt in 2005 before returning for his senior in 2006, where he went 4-0 on the mound and helped the Razorbacks to a 39-21 record.

“Not many kids from Arkansas get to play for the Razorbacks, and getting to the College World Series was really cool,” Holloway said. “But there’s nothing better than closing out a game at Baum Stadium with 10,000 people in the stands, especially in an SEC game.”

Holloway spent five years as a baseball coach at Greenwood, where the Bulldogs won the Class 6A state championship with current Arkansas pitcher Connor Noland leading the way in 2018. Holloway coached for one more season before taking a job in Northwest Arkansas with Pascal’s Heating and Air, where former Arkansas teammates Charley Boyce, Nick Schmidt, and Casey Rowlett also worked. Entering private business allowed Holloway more time to spend with his wife, Kristen, and the couple’s three young boys, Ty, Easton, and Beckett, who all play baseball.

“It’s been awesome,” Holloway said. “The biggest thing, I can help my wife out and be a parent. … I can be a dad.”

SCHOOL Booneville SPORT Baseball CREDENTIALS Batted .531 and compiled a 12-1 season record with a 0.76 ERA in 2001 when Booneville won the Class AAA state championship with a 26-1 record. … Went 3-0 with a save in 23 innings pitched in the 2001 Class AAA state tournament, allowing just 8 hits and 3 runs with 36 strikeouts. Selected MVP of the Class AAA state baseball finals, pitching a complete game in a 2-1 win over Central Arkansas Christian at Baum Stadium. …. Drafted out of high school by the Detroit Tigers in the 41st round of the 2001 Major League Baseball amateur draft.. … Also played football and ran track in high school at Booneville. …. Played baseball three years at Arkansas and helped the Razorbacks advance to the College World Series in 2004. … Went 4-0 as a senior for the Hogs after receiving a medical redshirt in 2005. … Head coach for five years at Greenwood, where he guided the Bulldogs to the Class 6A state championship in 2018. THAT’S WHAT HE SAID “Trey is a throwback in that he was play-everything and do-everything,” former Booneville baseball coach Dale Mann said. “He was good at everything he did. He was the whole package: character, intelligence, tenacity, dedication and work ethic were all second to none.”