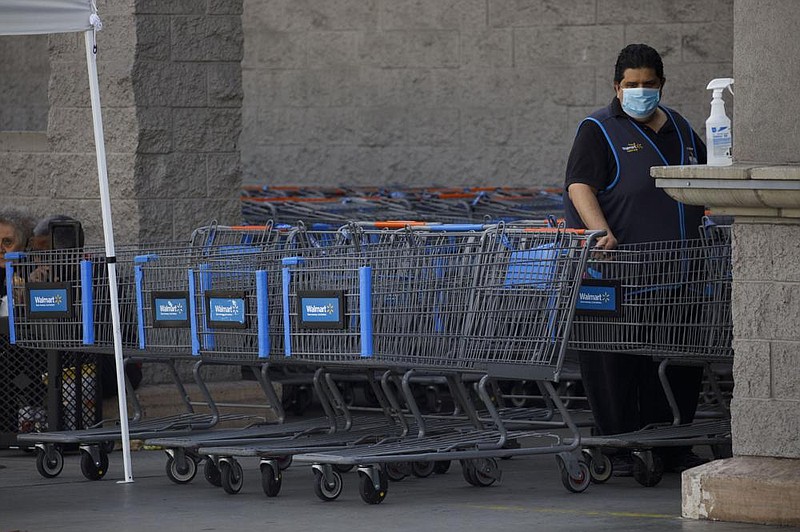 A Walmart employee cleans shopping carts to help prevent the spread of coronavirus at a Walmart Inc. store in Torrance, Calif., in May. Walmart only requires customers to wear masks in its stores where they are mandated by state or local ordinances. Bloomberg News/Patrick T. Fallon

Walmart Inc. trains its store workers in deescalation techniques and other safety measures, a spokesman for the retailer said after recent incidents involving shoppers who became belligerent when asked to wear masks after entering without one.

The Bentonville-based retailer doesn’t require customers to wear masks to help prevent the spread of corona-virus except where mandated by states or local ordinances. However, Walmart “strongly encourages” shoppers to wear face coverings and posts signs at store entrances reminding them of the importance of doing so.

A l l e m pl oye e s at Walmart’s stores, clubs, fulfillment and distribution centers, and corporate offices are required to wear face masks, which the company provides. The policy has been in place since April 20.

The Centers for Disease Control and Prevention and the World Health Organization recommend wearing face coverings in public settings where it’s difficult to maintain social distancing. Numerous studies have shown the masks greatly reduce transmission of the virus.

In a video widely viewed on Twitter before being removed, a man without a face mask was seen entering a Walmart store, reportedly in Orlando, Fla., and shoving an employee four times after the worker tried to stop him. A second video posted to Twitter on June 20 shows an employee and another man escorting the angry shopper to the exit.

The county that includes Orlando had passed an emergency executive order effective June 20 requiring everyone who lives, works or visits there to wear a face covering while in any public place.

Further, the order states, “All businesses are encouraged to prohibit entry of each person who is not wearing a face covering,” with exceptions for children younger than 2 or people for whom wearing a face mask would pose a health risk.

Also on June 20, local news in Turlock, Calif., reported a man became angry when a Walmart employee asked him to put face masks on his children. The man refused and then wouldn’t leave the store, prompting a manager to call police and report the family for trespassing. A bystander’s video posted on Facebook shows police escorting the family from the store as an officer explains what is happening.

California’s Department of Public Health enacted an order on June 18 requiring that masks be worn in most settings where social distancing isn’t possible.

Walmart spokesman Casey Staheli didn’t address the incidents in Florida and California, but said the retailer is providing the deescalation training for store workers as well as monthly safety meetings.

Staheli provided a statement in which the company said, “Maintaining customer and associate safety remains our top priority. We encourage customers to be especially mindful of one another during this unprecedented time and adhere to recommendations and decisions made by local officials regarding the uses of protective facial coverings while in public spaces.”

Walmart is far from the only retailer that has experienced backlash from customers over the wearing of face coverings. At a Family Dollar store in Michigan, a security guard was shot and killed in early May after telling a shopper she needed to wear a mask to enter the store.

Later that month, a Waffle House employee in Colorado was shot by a customer who had been turned away by another worker for not wearing a mask.

Michigan at the time of the shooting required residents to wear face coverings in enclosed public areas. Colorado encourages use of the masks in public places.

Family Dollar and Waffle House encourage but don’t require that customers wear masks. However, other businesses such as supermarket chain Kroger and warehouse club Costco do. Target Corp.’s policy mirrors Walmart’s. According to a recent Wall Street Journal article, most retailers instruct employees to avoid direct confrontations with customers.

“Understanding that people are upset, the best thing you can do is listen to them and validate how they’re feeling, and not get upset yourself,” Romo said. “The only person in that situation that I have control over is myself. So it’s about controlling yourself and not taking it personally.”

That technique helps calm the person in crisis, Romo said, which allows the other person to find out more about why they’re upset or angry and what kind of help they need. The problem could be mental health issues, a difficult situation in their lives, a substance abuse disorder or maybe a physical injury, he said.

“A lot of times, it’s a combination of things,” Romo said. “Maybe a person is diagnosed with depression and is doing really well at managing that. But maybe with the covid-19 pandemic, they now have lost their job, so there’s financial pressure. Then you’ve created a situation where they can no longer manage things on their own. And then they lash out.”

Training often takes place in a classroom setting, he said. But depending on the client’s needs, he can work up different scenarios that let participants practice the techniques through role-playing in a safe environment.

Romo, who said his very first job as a teenager was working in a Walmart store, adapts his course material to the group he’ll be addressing and tailors it to their needs. In a retail setting, he said, people could be upset over trying to make a return and it’s not going well, or not being able to find something they need. Or, as in the Florida situation, it may be not wanting to wear a mask.

In that video, which Romo has seen, “it’s all kind of rapidly evolving. It’s a very tough situation.” In a case like that, an employee may want to get other staff involved while keeping shoppers at a safe distance.

Not every person or situation can be deescalated, Romo cautioned.

The most important thing to remember, Romo said, is “don’t let yourself get into a situation where you feel unsafe.” If it does feel unsafe, he said, “get law enforcement involved. And if you feel someone may be in a mental health crisis, ask for a crisis intervention team officer.”