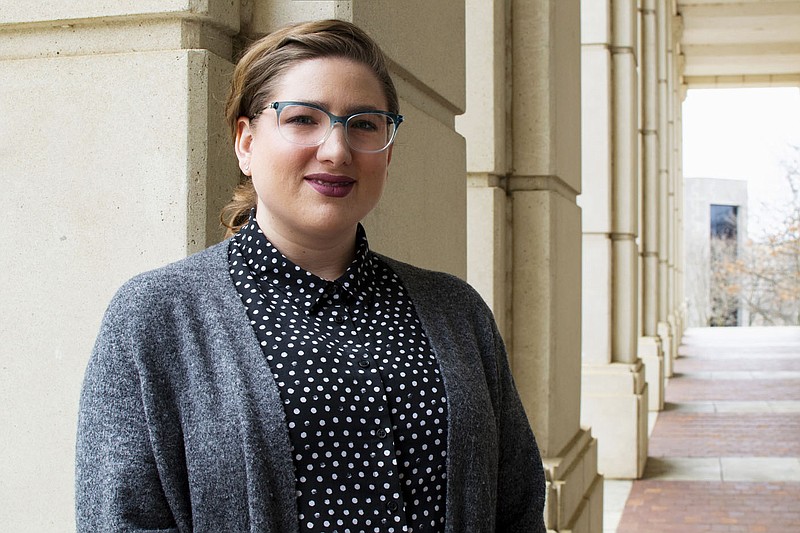 “I really see my role as a link between tradition bearers and organizations already doing this great work throughout the state,” said Virginia Siegel, a folklorist working with Arkansas Folk and Traditional Arts, a statewide folk arts program of the University of Arkansas Libraries. “I am here to document Arkansas traditional arts and produce programming that highlights Arkansas tradition bearers, and my focus is on supporting those who are already working to sustain Arkansas folklife and culture and finding ways to partner and enhance one another. Arkansas has a rich, diverse heritage, and I’m excited to shine a light on it.” (Courtesy Photo/LeeAnna Ta Thao, University Libraries)

If you're in Arkansas and have a story to tell about your experiences during the coronavirus quarantine, Virginia Siegel would love to hear it.

Originally from Ohio, Siegel is a professionally trained folklorist and holds a Bachelor of Fine Arts in Historic Preservation from the Savannah College of Art and Design and a Master of Arts in Folk Studies from Western Kentucky University. In between, she worked with low-income homeowners to revitalize and repair their historic homes through the Homeless and Housing Coalition of Kentucky.

"We went into homes, talked with people and heard their stories," Siegel told the University of Arkansas news service when she was hired in Fayetteville. "I became more interested in the homeowners and their experiences than the physical architecture on its own, and how people related to an environment and made it their home.

"I came to Arkansas to kick-start and coordinate Arkansas Folk and Traditional Arts," she says, "a statewide folk arts program of the University of Arkansas Libraries, supported by the National Endowment for the Arts and working in partnership with Arkansas stakeholder organizations and individuals, including the Arkansas Arts Council and Arkansas State University."

"Most states have a folk arts program, though they are housed differently in each state," Siegel explains, "sometimes in arts councils or humanities councils, sometimes in nonprofits and universities. AFTA was started in February 2019, but the presence of a statewide folk arts program is not new to Arkansas. A folk arts program has existed in Arkansas in various forms since the 1980s, housed at different points in the Arkansas Arts Council, the Texarkana Regional Arts & Humanities Council, and most recently, at Arkansas State University as the Arkansas Folklife Program. We are the successor to this legacy of work.

"[This] project was developed a few weeks into the covid-19 pandemic, once it had started to affect University of Arkansas life," she goes on. "AFTA conducts oral histories as part of our daily work, and while the interviews in this project are not specifically focused on folk arts, they are a way we can use our skills to document history in the moment.

"The primary goal is to collect interviews now, while our experiences of the pandemic are fresh and present, rather than wait until later," she goes on. "When looking back on memories, we tend to collapse details or make our experience fit the narrative of how others are describing it."

Siegel says an interview can be recorded by an individual and submitted or a storyteller can contact AFTA to be interviewed. So far, Siegel's favorite has been with Matt Jones, co-founder of the Facebook group "Blast Bob Seger out of your windows at 8:15 PM."

"His Facebook group is an example of Fayetteville folks making the best of a situation and creating a bit of fun and community while social distancing," she says.

After processing, the interviews will be archived in Special Collections at the University of Arkansas Libraries. Siegel says the project will continue "as long as there are folks who wish to contribute an interview."

"We are not necessarily bounded by the length of the pandemic itself and can conduct or receive interviews indefinitely," she says. "We do not have goals for a number; we are guided by making this resource available and by what people would like to share, however many interviews that may be in the end.

"By collecting now, we are hoping to capture the nuance of the experience," Siegel adds. "It is a bonus that many Arkansans are taking up old and new hobbies alike while social distancing, and many of these include traditional arts, like baking, music making, and sewing. We would especially love to document these aspects of Arkansans' experience of covid-19."