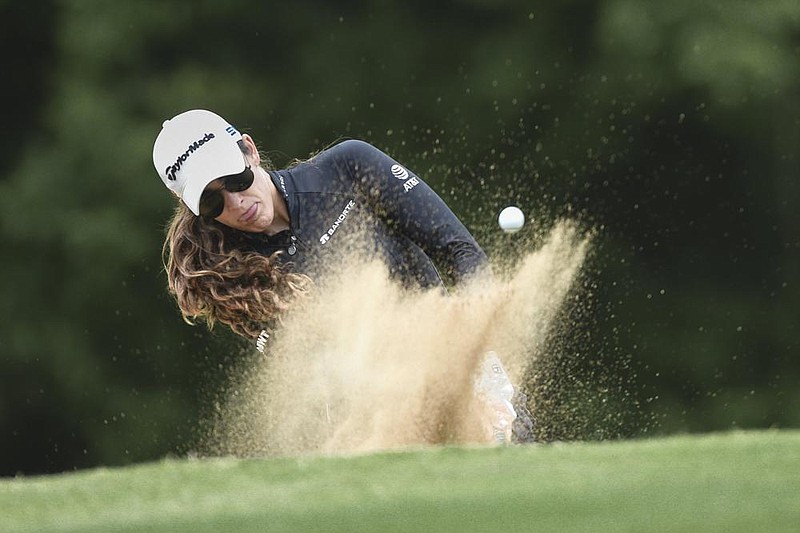 Fassi said it was fitting that her first win as a pro came in her adopted state of Arkansas after a stellar collegiate career at the University of Arkansas that culminated with an individual national championship.

"I think it's pretty cool that I got to win in my home away from home," Fassi said after she closed at 14 under par for a four-stroke victory in the Women's All Pro Tour event. "I've always said this is as close as I can get to winning at home [in Mexico], so it's pretty special that this is my first win, and hopefully I can come back and do it again some time soon."

Fassi, who earned $7,500 for the victory, grabbed the first-round lead after scorching the Scotsdale course with an 8-under 64. She never relinquished it, even though she stumbled with a 73 in the second round. She closed strong over the final two days when play moved to Bella Vista Country Club.

"Fortunately, I had a solid round that first day, which boosted my confidence and showed me that what I've been working on the last few months has been paying off," Fassi said. "I struggled a little bit the second day, but that 1 over was a good score for how I was hitting it. It was nice to be able to scramble and make pars.

"The last couple of days here at the country club were good to me. I was hitting solid shots and taking advantage of some of the par 5s. I'm happy with the way my game is feeling right now."

Fassi's final round included two eagles, one at No. 8 and another at No. 10.

The eagle at 10 came after she crushed a drive to within 20 yards of the front of the green. She lofted a low chip that bounced once before settling into the cup, garnering cheers from a small gallery. It moved her to 15 under, and she was never threatened the rest of the way.

Fassi's former teammate at Arkansas, Olivia Lavy, was her caddie for the week. The two spent about two months together at Fassi's home in Florida when the coronavirus pandemic forced Lavy to move from New York just three weeks after starting a new job there.

"She was super sharp all week," Lavy said. "She's been really working hard with David Ledbetter, and it's showing. She's made some swing changes, and they have really helped her game."

Alexa Pano, a 15-year-old amateur from Florida, finished the week at 10 under to claim second place. Ann Parmerter and Kelly Whaley finished 7 under to tie for third and earn a $2,888 payday apiece.

Arkansas golfer Brooke Matthews shot a 6-over 78 on Saturday to finish tied for 19th at 6 over for the tournament.

The men's tournament was a dogfight all week, and that did not change Saturday as Sam Stevens and Trey Mullinax each finished at 28 under and had to play a sudden-death playoff hole.

Stevens birdied playoff hole No. 1 after a booming drive split the fairway, while Mullinax's tee shot hit the cart path on the right side. Mullinax's second shot off the hardpan flew well past the hole, but he was able to salvage par. Stevens' second shot rolled within 8 feet of the pin, and he holed the birdie putt for the win.

The former Oklahoma State golfer earned his second career All Pro Tour victory. He plans to fly to Colorado today and attempt to qualify for the Korn Ferry Tour's TPC Colorado Championship after earning $25,000 for Saturday's win.

"I've got a few more ... Mondays that I'm going to do this summer," Stevens said. "The APT does a good job of following the Mondays, and the tournaments are within driving distance. So if I don't get into the Korn Ferry Mondays, then I'll play these tournaments."

Arkansas golfer William Buhl, who played as an amateur, finished tied for sixth at 22 under after shooting a 6-under 66 on Saturday. Former Razorback Alvaro Ortiz earned $2,855 after finishing tied for ninth at 21 under. Ortiz shot back-to-back 65s over the final two rounds to rocket up the leaderboard after a slow start. 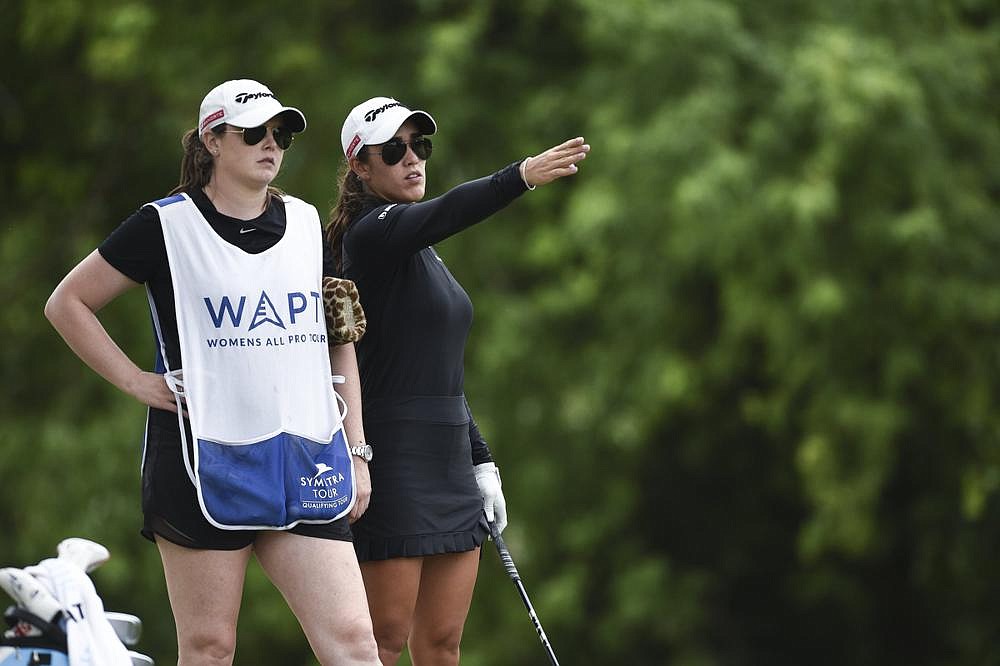 Maria Fassi (right) and caddy Olivia Lavy line up a shot, Saturday, June 27, 2020 during the final round of the WAPT pro golf tournament in Bella Vista. (NWA Democrat-Gazette/Charlie Kaijo)