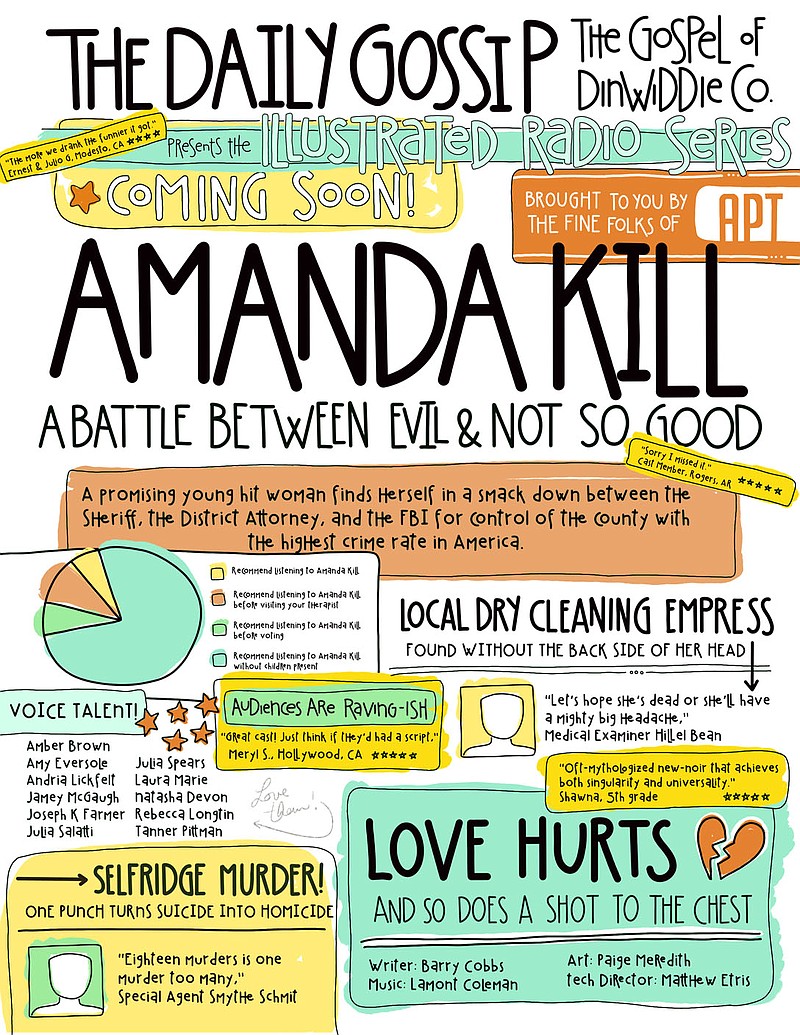 "Amanda Kill" is a new web series created by Barry Cobb for Arkansas Public Theatre at the Victory. (Courtesy Image)

Barry Cobbs is a hometown boy made good. A graduate of Rogers High School, he earned a Bachelor of Arts in Film at the University of Missouri and a Master of Arts in Film at the University of Texas, then moved to Los Angeles, where he worked with Fox Television, NBC Productions, Warner, CBS and Disney. He and his wife -- a California girl -- moved back to Arkansas "so I would spend more time with the family and not on the production lot." He runs StudioChunky, a film production company making commercials, marketing pieces and educational films, with occasional sports programs and rock and country concerts.

Now, however, Cobbs is also working part-time for Arkansas Public Theatre in Rogers and is about to launch his first online project for APT. This week, he answers four questions for What's Up!

Q. How did you wind up involved with APT? And what are your goals?

A. Last fall, Joey Farmer told me about the desire by APT to produce or host alternative programming on the dark nights between stage productions. He asked if I would like to be programming director and find those alternative programs, such as performance art, music, spoken word, movies and even special events for groups significant to Rogers and Northwest Arkansas. Of course, I said yes and started in February. Our goals are to expand the types of programming at the theater; make dark nights productive so that the Victory becomes a destination on every weekend; reach underserved audiences with programs attractive and significant to them; and introduce artforms new to the theater and our audience. In practice, this becomes events like an evening of improv comedy, films or music from a country or culture, storytelling and poetry slams, performance art and themed programs around a speaker, a film, a performance troupe or a musical group.

A. "Amanda Kill" is my baby. It's a comedy with the log line, "A promising young hit woman finds herself in a smackdown between the sheriff, the district attorney and the FBI for control of the county with the highest crime rate in America." The story is a battle between evil and not so good in Dinwiddie County. It starts with two unanticipated murders, of an Army major and a murder-staged-to-look-like-a-suicide of a local dry cleaner, that attract the attention of the district attorney and the FBI, who quickly get in the way of each other and the manipulative and powerful county sheriff. We're recording 16 episodes.

Q. Who is involved that our readers know?

A. With the pandemic, I cast this thanks to Zoom, texts and phone calls. All our rehearsals are via Zoom, and our performances are recorded by each actor while we're all on a conference call. Casting was partly by design and the rest by good luck. Three characters were written for specific talent, Jamey McGaugh as District Attorney James F.A. McGaugh; Laura Marie as Sheriff Sylvan Honeywell; and Julia Spears as the Narrator. The cast includes performers from The Victory Theater and TheaterSquared, among them Joseph K. Farmer, Amy Eversole, Amber Brown, Andria Lickfelt, Tanner Pittman, Rebecca Longtin and NaTosha DeVon, who just got her MFA in Drama from the University of Arkansas. Amanda Kahari (the young hit woman) is played by Julia Salatti, a Maryland native who just got her BFA in Musical Theater from Rider University.

I wanted this to be different from a radio play, and with the artwork of Paige Meredith, a Rogers local, we've created an "illustrated radio series" that gives us a glimpse into the alternate world of Dinwiddie County. Music is composed by Lamont "Logic" Coleman, a composer and performer based in Nashville, Tenn. Matt Etris, our technical director, figured out how to bring the cast together, work through everyone's technical troubles, and do the sound design and editing on each episode.

Q. What else do you have up your sleeve for APT while we wait for theater to resume?

A. The great thing about unique times is it gives us the chance to experiment. We've recently released "Mastergate," a radio play by Larry Gelbart, featuring Elizabeth Wax, Tim Gilster and Ed McClure. Upcoming programs we're looking at include producing more radio and "illustrated radio" plays written by local and regional writers, storytelling on a theme, local music, and "master class" discussions with local and regional artists and performers.