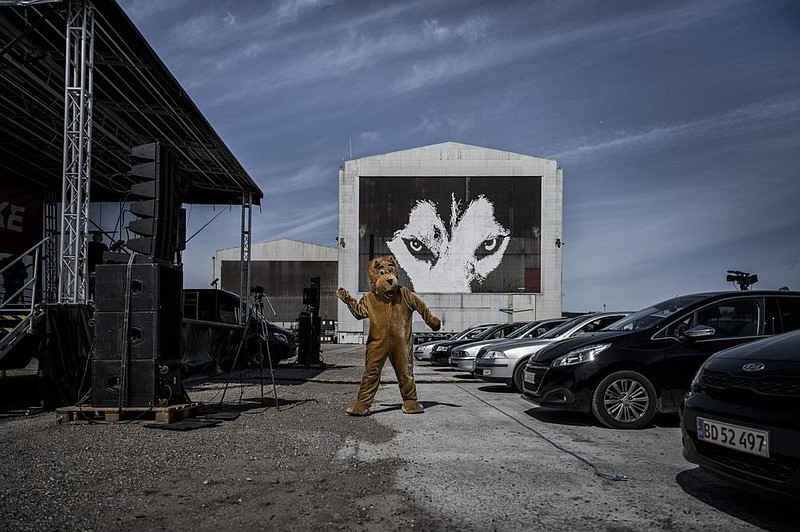 COPENHAGEN, Denmark -- From a warehouse wall in eastern Copenhagen, Denmark, a vast mural of a wolf stares down on an industrial wasteland. Usually, it forms the backdrop for a heavy metal festival called Copenhell, held every June.

But in a world upended by the coronavirus, this year's festival has been canceled. In its place, the wolf now looms above a group of evangelical Christians, who have held a drive-in church service here almost every Sunday since the Danish lockdown began.

"We are the Christian sheep," said the group's pastor, Thomas Christensen, walking between his congregants' cars, preparing to lead a service last Sunday.

"That is the big bad wolf," he said, half in jest. "And I'm the shepherd, protecting the flock."

Like all sections of society, religious groups have struggled to adapt to the pandemic.

By their very nature, religious services of many faiths became a health threat because they encourage people to gather, find fellowship and sing in proximity to each other. Religious gatherings in France, South Korea, the United States and Malaysia were found to have accelerated the spread of the disease in those and other countries.

In recognition of that risk, most conventional religious gatherings were canceled, with pastors, imams and rabbis pivoting to online broadcasts or other solutions. Muslims in southern Germany prayed in the huge parking lot of a furniture store, with worshippers kneeling in their own parking spaces.

But among the most unconventional responses began here among the warehouses of eastern Copenhagen, where Christensen's congregants have driven every Sunday since late March to sing, pray and honk their horns, while still cocooned by their windshields from potentially infectious fellow worshippers.

The drivers park in front of a small stage that is erected and dismantled every Sunday morning. A small choir and backing band belt hymns and prayers, amplified by a wall of speakers provided by a company that usually equips musical events.

A man-made ski slope stands in the distance.

Christensen reads his sermon into a microphone. There's no communion, though individual worshippers have sometimes brought their own bread and wine to consume in their car.

"Your kingdom come, your will be done," the lead singers sang at one point from the stage. "Hear us in heaven."

Of that, there was never any doubt.

Instead of saying "Amen," the congregants simultaneously blared their horns -- all 26 cars of them.

"Who let the cars out?" asked the pastor, in between hymns.

"We try to have fun with it," the pastor said later.

Even before the pandemic, Christensen's evangelical church, the Open Church, which has three branches including the one in Copenhagen, prided itself on its unconventionality, hoping to attract worshippers put off by the more formal approach of other Christian groups.

When churches closed at the start of the lockdown in March, the Open Church began broadcasting its services on the internet.

But Christensen's congregants found it alienating to worship through a screen, cut off from their community.

Praying online "required a lot of concentration," said Benjamin Lund, a 23-year-old professional soccer player behind the wheel of a gray car near the stage.

And Christensen was worried. It was a time of great difficulty. People were anxious. He felt his congregation needed the church to help "navigate through."

Then Christensen saw a video of an American congregation at a drive-in cinema, watching a livestream of a church service taking place elsewhere.

An idea struck him. What if the Open Church went one step further, he wondered -- with both drivers and pastor at the same venue?

He remembered the wasteland between the warehouses, up near the man-made ski slope. Before the pandemic, musical events were held there. Why not a church service?

After a bit of negotiation, the plot's owners agreed to let him rent the space for about $400 a week, a bill footed by members of the congregation. On top of a nearby mound, they installed a series of giant letters, spelling the word "Copenheaven." And so began one of the pandemic's first drive-in churches, an idea so popular that members of more traditional denominations began to attend, in the absence of live services at their own places of worship.

The concept was later borrowed by dozens of other pastors across northern Europe.

"It's odd times," said Per Jonsson, a 37-year-old set engineer, who has attended the services with his family since the beginning.

"But it's better than being at home, just watching it" on a website, said his wife, Carina Jonsson.

"We have a physical presence," said Jonsson, a 38-year-old civil servant. "I take in the message better here than at home on the internet."

Now that the restrictions have begun to lift in Denmark, religious groups can begin to gather again in their usual buildings.

But Christensen intends to keep the drive-in services going -- not every Sunday, but every few weeks at least.

Until there is a vaccine or reliable treatment for the coronavirus, some vulnerable people will still be wary of attending regular church, he said.

"And we want to provide a way for them to still go to church on a Sunday," he said.

But there are still a few technical challenges to overcome.

While talking on a recent Sunday, Christensen broke off suddenly and rushed to speak to a man noting down the registration of a parked car.

It was a caretaker working for the site's owner, Christensen explained later.

The caretaker hadn't been told there was a service that morning, Christensen said.

And he was about to hand out a ticket.