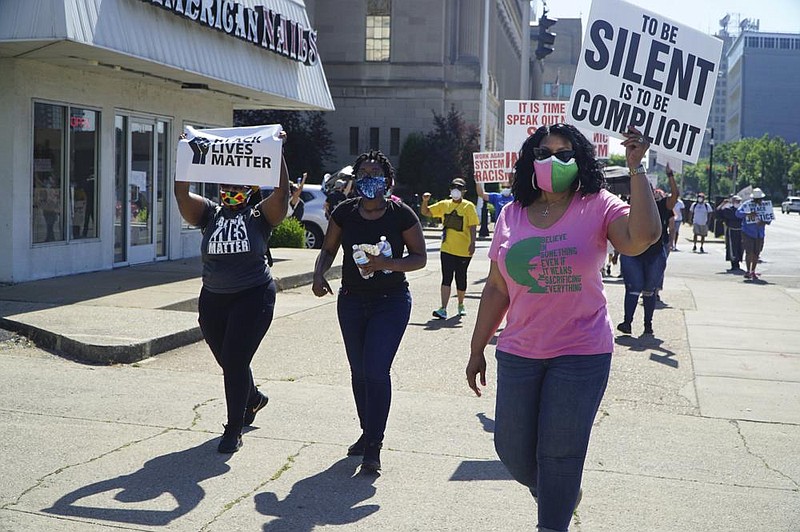 Black Catholics walk from the federal courthouse building in downtown Louisville, Ky., to 12th and Broadway, in the “Black Catholics Unite: Stand For Justice March" June 6 which was organized by young adults. Black Catholics across the U.S. hear their church’s leaders once again calling for racial justice, but at this volatile moment, they want action as well as words. (The Record via AP/Ruby Thomas)

NEW YORK -- Black Roman Catholics are hearing their church's leaders calling for racial justice once again after the killing of George Floyd, but this time they're demanding not just words but action.

As protests against racism and police brutality continue nationwide, there are rising calls for huge new investment in Catholic schools serving black communities; a commitment to teach the complex history of black Catholics; and a mobilization to combat racism with the same zeal the church shows in opposing abortion.

"As a church, we're very good with words. The church has made clear it stands against racism," said the Rev. Mario Powell, a black priest who heads a Jesuit middle school in Brooklyn.

"What's profoundly different this time is folks aren't looking for more words -- they're looking for actual change," he said.

Noting that hundreds of Catholic inner-city schools have closed in recent decades, he's among those urging church leaders to make the necessary spending to reverse that. He also said all Catholic schools should teach the history of black Catholics in America.

"It's a history of discrimination and oppression," said Powell, 38. "It's also a very rich history that should be celebrated, of a population that has overcome a lot."

In 2018, after what it called an accumulation of "episodes of violence and animosity with racial and xenophobic overtones," the U.S. Conference of Catholic Bishops issued a pastoral letter condemning racism and vowing to combat it. Numerous bishops issued similar statements following Floyd's death under the knee of a white Minneapolis police officer.

Professor Shannen Dee Williams, a black Catholic who teaches history at Villanova University, argued in a June 15 article in the National Catholic Reporter that such responses are insufficient.

The recent statements "fall way short when it comes to acknowledging the church's role in the contemporary crisis and direct complicity in the sins of anti-Black racism, slavery and segregation," she wrote, noting that the church was a major slaveholder in several states and engaged in segregation of parishes, schools, hospitals, convents and seminaries for decades after emancipation.

In an interview, Williams said the U.S. church hierarchy should formally apologize.

"We want them to own up to that history, and then atone for it," she said.

The same day her article appeared, Archbishop Wilton Gregory of Washington, D.C., the highest-ranking black leader in the U.S. church, joined eight fellow bishops from his region in acknowledging the church's "sins and failings" on racial justice.

"Prayer and dialogue, alone, are not enough. We must act to bring about true change," their statement said, calling for greater equality in health care, education, housing and criminal justice.

Black Catholics' somewhat marginal place in the U.S. church is illustrated by statistics compiled by the national bishops' conference.

According to the conference, there are about 3 million black Catholics, roughly 4% of the nation's 69 million Catholics. But there are just 250 black priests, or less than 1% of the total of 36,500, along with eight active black bishops out of more than 250, or about 3.2%.

Some are calling on church leaders to engage more energetically with youth at the forefront of the protest movement.

Earlier this month scores of young black Catholics staged a march in Louisville, Ky., to protest racial injustice and also signaling they want their local church leadership to do more.

One of the speakers, retired priest John Judie, included the church in a list of institutions that have favored white people over black people.

In an interview, Judie said some young people in the archdiocese are uncertain about their place.

"When is the leadership going to sit down with the young adults who organized that protest and listen to what drove them to do this?" Judie said. "So far, I'm not seeing it happen."

That's a notion shared by Ansel Augustine, who was a youth minister at his parish in New Orleans as it rebuilt after Hurricane Katrina.

"We see our youth and young adults leading these movements, putting their faith into action," said Augustine, now executive director of cultural diversity for the Washington archdiocese. "Now is the time to empower them, to listen to what these young prophets are saying."

Ralph McCloud, who directs the anti-poverty program of the national bishops' conference, said such steps are underway.

"We've begun with the listening sessions, hearing the very painful stories of people who've been victims of racism within the church and without," McCloud said.

"We need to broaden the conversation and see who's missing at the table," he added. "With African American Catholics, our numbers are so low that we get overlooked, sometimes inadvertently, sometimes intentionally."

Back in 2014, Augustine wrote an article for the Catholic media outlet Busted Halo asking why the fight against racism seemed to be a lesser priority for the U.S. Catholic leadership than the anti-abortion cause. Augustine took note when those remarks were echoed by Pope Francis earlier this month.

"We cannot close our eyes to any form of racism or exclusion while pretending to defend the sacredness of every human life," the pontiff said.

Gregory, the Washington archbishop, echoed the idea that racial justice should be part of pro-life advocacy.

"Birth is only the first moment of a person's human dignity, which is never lost throughout the journey of life," he said via email.

That message heartens people like Loralean Jordan, a parishioner of the predominantly black congregation of the Church of Saint Peter Claver in St. Paul, Minn.

She would like to see the church help coordinate a national anti-racism march and direct all U.S. priests to mark the feast day of Peter Claver, the 17th-century patron saint of enslaved people, by preaching about racial injustice. 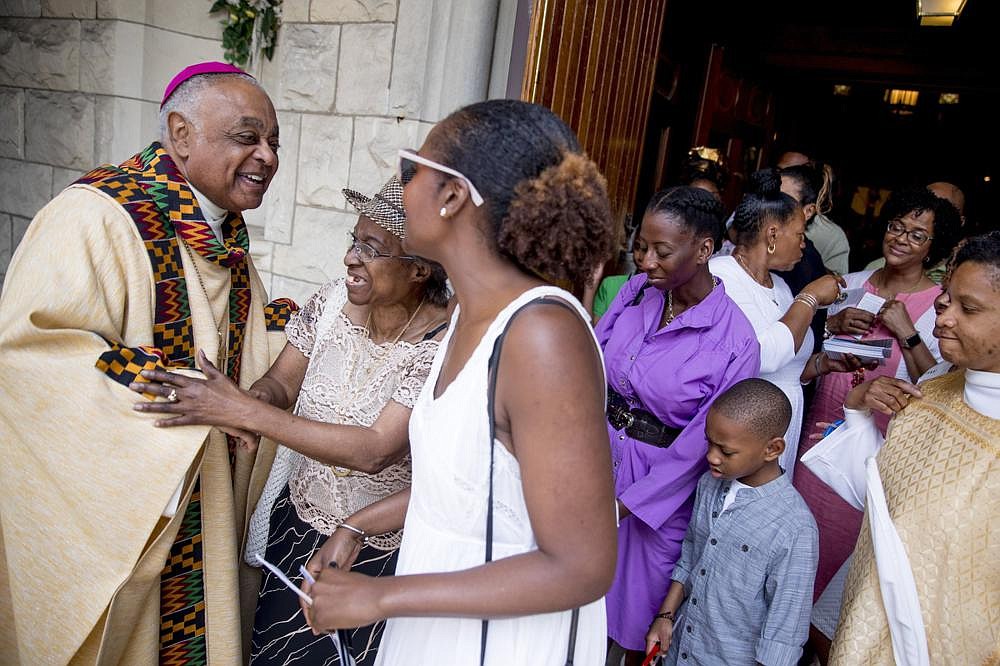 Archbishop of Washington Wilton Gregory (left) greets parishioners following Mass at St. Augustine Church in Washington. This month, Gregory, the first black in charge of the Archdiocese of Washington, joined with eight fellow bishops from his region to acknowledge the church’s “sins and failings" in regard to racial justice. “Prayer and dialogue, alone, are not enough. We must act to bring about true change," the bishops said, calling for more racial equality in health care, education, housing and criminal justice. (AP/Andrew Harnik)