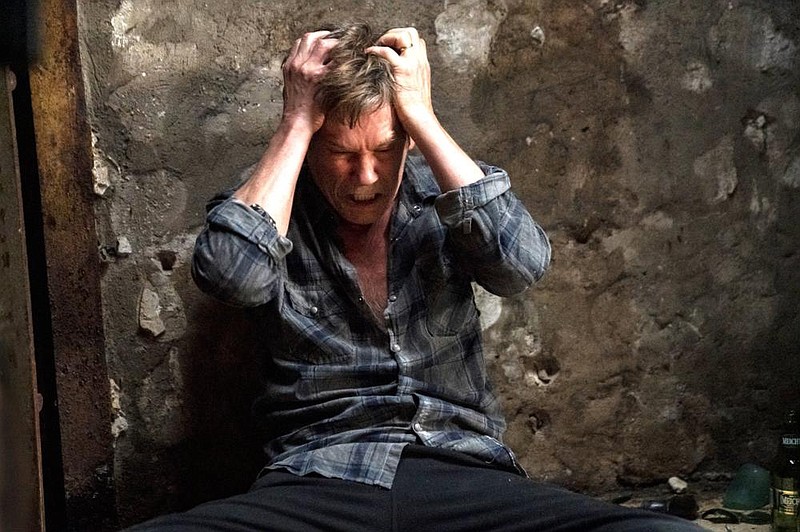 Theo Conroy (Kevin Bacon) is a wealthy man who worries that his younger actress wife might be fooling around on him in the Blumhouse horror movie You Should Have Left.

Blumhouse, the niche studio specializing in B-grade horror movies, begins each of their productions with their studio logo, a short tease of image and sound: Upstairs in some attic room, as the camera swings in swooping lurches, there's a spinning chair, an open book flipping through pages, cracks appearing in the ceiling, a swinging bare lightbulb, and a Ringu-like girl in a nightdress staring down at the floor disconsolately. It's clearly meant to encapsulate their vision of scary films via common genre tropes, the trouble is, their iconography often seems to directly inform the ensuing film, sometimes literally. Too commonly, their films work in similarly trite ways, using an algorithmic combination of scary elements in a mixture that has no choice but to come out bland and rote. The end result is like something out of a Chips Ahoy bag, the predictability of the experience both the initial attraction and what ultimately leaves them unsatisfying.

Director David Koepp is best known as a prolific screenwriter, with credits including good (Mission: Impossible), bad (War of the Worlds), and ugly (The Mummy). For all his success, his script for this You Should Have Left, based on the novel by Daniel Kehlmann, has precious few moments that feel remotely organic. We're instead spoon-fed variations of things that have happened many, many times before -- a result that, come to think of it, fits the thematic elements of the film in ways likely unintended -- en route to a mish-mash of known ingredients.

Kevin Bacon plays a wealthy, flinty man named Theo Conroy. He lives in a palatial mansion outside of L.A. with his young actress wife, Susanna (Amanda Seyfried), and their adorable 6-year-old daughter, Ella (Avery Essex). His wife may be the in-demand Hollywood property, but it seems, however, that Theo has an unfortunate notoriety of his own: Some years ago, his first wife died under mysterious circumstances for which he stood trial and was eventually acquitted. The tabloids ran with it, granting him the worst sort of fame, with many people -- at least, to his mind -- still judging him as having killed her himself.

In order to get away from the anxiety, and his penchant for horrible dream-within-dream nightmares, he proposes a family vacation somewhere remote, where the three of them can settle in together as a family and solidify their bond. Part of his impulse stems from his suspicions about Susanna, of whom he maintains a steady burn of jealousy.

They end up in a stunningly modern-looking place in the hills of Wales. Initially, they are thrilled with the joint, but it doesn't take long for weirdnesses to begin happening. Doors opening, mysterious architectural abnormalities that leave them often bewildered as to what part of the house they're in, Ella's recurring nightmares about a peculiar man standing over her threatening to tell her the truth about her daddy, and someone scrawling in Theo's journal, one he keeps as part of a program he's taking on mindfulness. All of this, of course, eventually leads to one last night in the possessed house, in which all sorts of manifestations take place in a rising climactic pas de deux.

Nothing inherently wrong about the set-up -- at this point, no one would be surprised by a demonic-possessed Airbnb listing (from a Superhost!) -- but Koepp is too often trading in horror banalities. No stone is too well-recognized not to be overturned -- when they first enter the house, Theo stops Sussana from talking for second. "Can you hear it?" he ventures, waiting for her to have to ask what it is she's meant to hear. "The silence!" he says with irritating satisfaction -- and none of the dark corridors, thudding sound effects, unsynced mirror reflections, or inexplicable Polaroids that litter the walls can make up for it.

Much like The Sixth Sense, certain particularly weak-seeming aspects of the screenplay (how does the malevolent force have a cell phone, and what sort of data plan do they get?) are explained by the tricksy ending, but not before you've already long-since given up on the thing. In the final tally, the single most terrifying thing might be the absolutely bananas way Kevin Bacon writes the letter 'E' in his journal, a truly horrifying upstroke with some squiggles underneath it. It is in watching his penmanship the film offers its biggest inducement to shudder.

You Should Have Left

This movie is available on-demand via Amazon Prime and other streaming platforms and pay-TV operators.