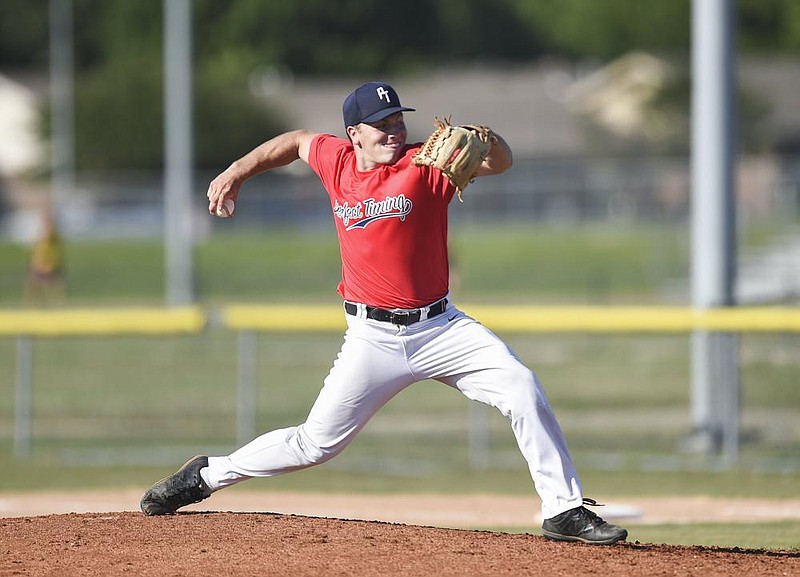 PT Black right-handed pitcher Nate Wohlgemuth, a University of Arkansas signee, made the most of a tough outing Thursday in a 3-1 loss to PT White at the Tyson Complex in Springdale. “I just had to pitch my way through it,” he said. “I matured a little bit today.” (NWA Democrat-Gazette/Charlie Kaijo)

SPRINGDALE -- University of Arkansas signee Nate Wohlgemuth wants to use his time in the Perfect Time Collegiate League to get better and learn.

The hard-throwing Perfect Timing Black right-hander struggled with his command, and Perfect Timing White tagged him with a 3-1 loss in a battle of the top two teams in the league.

"Pitching yourself out of jams was pretty much what it was about today," Wohlgemuth said. "Learning how to get yourself out of the tough innings. You know, I didn't have my best stuff today, but you know I'm just working on things.

"I just had to pitch my way through it. I matured a little bit today."

League-leading PT White (11-1-1) touched up Wohlgemuth for 3 unearned runs in the first inning thanks to a walk, a single, 2 errors and 2 passed balls and made that stand up for the victory.

Wohlgemuth said his legs felt fatigued, but it didn't help that he also tweaked his right ankle getting off the mound to field a ground ball against the first batter he faced in the bottom of the first.

"Kinda the rest of the game I was holding back a little bit," said Wohlgemuth, who didn't give up a hit over the next three innings. "I just didn't want to push too hard. But it seemed like the other innings after the first I pitched through it."

The PT Black starter had been dominant in his previous outings, allowing 1 hit and 1 unearned run over 3 innings of work. He struck out five and did not walk a batter. But Thursday was a different story, walking 5 in 4 innings and striking out 3 -- 2 on curveballs.

The Owasso, Okla., product, who touched 98 mph earlier this year, was told he could be picked anywhere from the third to fifth round in this year's Major League Baseball Draft. However, the draft was shortened to only five rounds and he was not chosen.

Wohlgemuth said it would have taken a lot for him to sign a professional contract.

"It would have taken life-changing money to take me away from Arkansas," said Wohlgemuth, who also considered Oklahoma and TCU.

PT Black finally got on the scoreboard in the top of the sixth thanks to a two-out, RBI-single by Brady Slavens, who finished 2 for 3 and threatened in the seventh.

Black loaded the bases with nobody out thanks to a single, a walk and a bunt single against right-hander Clayton Phillips. However, the Ecclesia College freshman came back to strike out Kade Folmar and ended the game with a line-drive double play off the bat of Colten Sagely.

Phillips is technically on the PT Black roster, but PT White was in need of a pitcher and Phillips needed to get some innings on the mound, PT Black Coach Zac Bottoms said.

"They were out of guys. It's been a long week and we wanted to get him some innings," Bottoms said. "He's been able to throw some innings, swing it at the plate and play some first base."

Phillips scattered 4 hits, allowing 1 unearned run over 3 innings of work. He struck out two and walked one.

Red erupted for 11 runs in the first inning and ran away from Grey in a five-inning game.

Sam Golden went 2-for-4 with a home run and three RBI to pace Red, which had only seven hits but was issued seven walks.

Golden also pitched an inning as Grey was held to three hits.