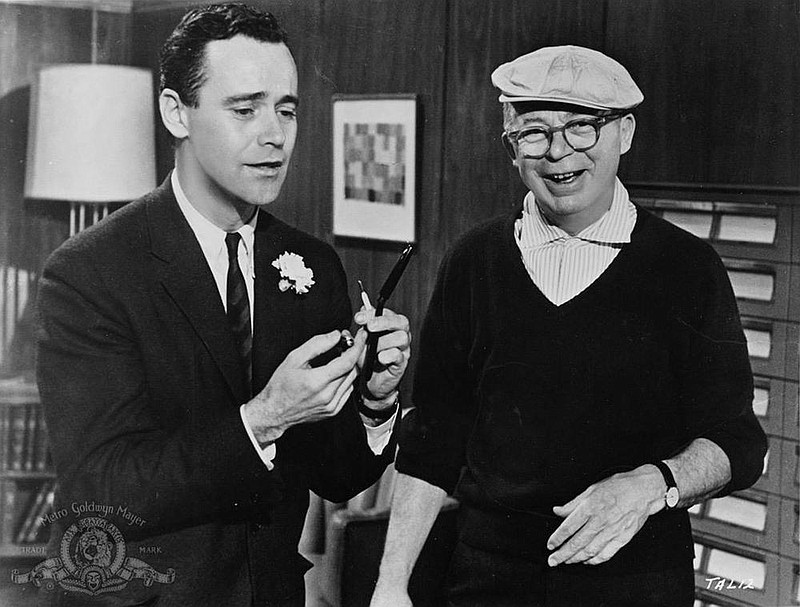 Jack Lemmon and Billy Wilder on the set of Wilder’s 1960 classic The Apartment.

Twenty years ago, I had the pleasure of finding out whether Billy Wilder had really earned his trio of Oscars for co-writing, producing and directing The Apartment. My friend Adeline told me that she was feeling self-conscious about her English, having emigrated from Malaysia. I told her that her hilariously blunt remarks during our time together ("I was happy to see the movie with you, Dan, but I'm glad I did not pay for it") were sufficiently eloquent and that two of her fellow immigrants won an Oscar for the script to this movie.

She invited some of her buddies from her home country to try out this mysterious film co-written by Wilder, who arrived in America during the '30s from Berlin speaking nothing more than jazz lyrics and curse words, and his Columbia University-educated collaborator I.A.L. "Iz" Diamond, who emigrated to the States from what is now Moldova at age 9.

As the film started, Adeline declared, "This is the first black-and-white movie I have ever seen. If I do not like it, I will never trust your opinion again!"

Both Billy Wilder and I were on notice.

I was worried the thick, Yiddish-inflected slang might lose my friends as they watched the then-40-year-old movie. I need not have fretted.

In the opening five minutes, Adeline carefully observed that C.C. Baxter (Jack Lemmon) was pacing outside his own apartment for a reason. As his boss Mr. Kirkeby (David Lewis) and his brash mistress Sylvia (Joan Shawlee) frolicked above, Adeline pieced together why Lemmon was unable to get into his own home and burst into thunderous laughter, yelling "Guys!"

The giggling grew when Sylvia angrily asked, "You mean you bring other girls up here?"

Wilder and his mentor Ernst Lubitsch (To Be or Not to Be, Ninotchka, which Wilder-co-wrote) advised younger filmmakers to "Let the audience add up two plus two. They'll love you forever." Adeline was now living proof.

While there are certainly fewer elevator operators than there were in 1960 (to be fair, they may outnumber Blockbuster clerks these days), The Apartment is still entertaining because many of the problems that helped inspire Wilder and Diamond haven't gone away.

In the two months depicted (November through December 1959), Baxter rises from an office drone sitting at an adding machine to an executive at Consolidated Life. While his skills as a number cruncher are formidable, Baxter's ascent has less to do with his glowing efficiency reports and more with the fact that he's loaned his modest apartment to his superiors so they can have extramarital affairs.

When I discovered this film at the Topeka Public Library in 1992, it was the first time I'd ever seen a world like the one I lived in onscreen. I was used to seeing stories like Star Wars or Lawrence of Arabia, where the fates of nations or even galaxies weighed on the characters' actions.

With The Apartment, I quickly got the sense that even bureaucratic worker bees like me, toiling at the Kansas State Board of Education, could make decisions with profound impact, even if wars or spaceships weren't involved.

In the case of Consolidated Life, Baxter's career advancement winds up encouraging a group of managers who seem more interested in flaunting their fat salaries and cheating on their spouses with coworkers. One wonders how much the company's customers can trust them when they are willing to betray and lie to each other simply for such sordid stakes.

The phrases "sexual harassment" and "#MeToo" are nowhere to be heard in The Apartment, but the ideas are clearly there. I might have noticed the ideas a little more clearly because I was reading the book Capitol Games, about the Clarence Thomas confirmation hearings, around the time I saw the film.

While Wilder and Diamond toss out a seemingly endless series of comic bon mots ("Night like this, sorta spooks you walking home to an empty apartment," says Margie McDougall. Baxter replies, "I said I had no family, I didn't say I had an empty apartment."), the two never lose sense of how grave the consequences can be for the executive's predatory behavior.

The cinematography by Joseph LaShelle is more suited to a film noir, so when The Apartment radically changes tone in the second act, Wilder and Diamond keep viewers riveted.

It's as if they were softening the audience up before revealing how Baxter's mentors have ruined the lives of others. While nobody goes to jail or dies in The Apartment, these guys come close to causing actual fatalities. One particularly satisfying moment comes when a spurned secretary (Edie Adams) gets back at the philandering HR director (Fred MacMurray) for breaking her heart and ruining her career.

If anybody but inherently appealing Jack Lemmon played Baxter, one could imagine viewers sprinting for the exits. Wilder and Diamond keep the story tight by following him as he gets closer and closer to the same empty, destructive life that his bosses have.

While his supervisors are all WASPs, it's fitting that the characters with the strongest morals in the film are the Jewish doctor and his wife (Jack Kruschen and Naomi Stevens), who seem to remember Jesus' warning about how camels have an easier time getting through an eye of a needle than rich people do of entering the Kingdom of Heaven.

It also helps that Baxter grows to love an elevator operator named Fran Kubelik (Shirley MacLaine) so much that he stares at her with affection even if she might do nothing for him in return. Watching Baxter transform from a self-serving worm into, as Dr. Dreyfuss advises him to become, a mensch is possibly one of the most compelling transformations in cinema.

The Apartment was a box office hit and won five Oscars. Diamond, production designer Alexander Trauner (The Man Who Would Be King, Children of Paradise) and editor Daniel Mandell also picked up statues. It's now in the National Film Registry and speaks to people as far away as Malaysia.

If the movie has aged like a bronze sculpture, it received a cool reception from many critics. Hope Holiday, who effortlessly nailed her first speaking role in the film as a barfly Margie MacDougall, who picks up Baxter, recalls in one of the extras in a 2017 Blu-Ray that, "I think mostly men were offended by it, and most of the people who reviewed it felt it was in bad taste, and they didn't know what it was. Was it a comedy? Was it not a comedy? Was it a serious drama with some laughs in it? They were offended by the men cheating on their wives and using Jack Lemmon's apartment. That's the thing that bothered people the most. Didn't bother me because that went on in life anyway."

Wilder got the initial idea, by reworking David Lean's Brief Encounter, in 1945 by wondering if a movie could be made about the fellow who loans his bed to the lovers. Because of the Production Code of 1932, Wilder had to keep The Apartment on the back burner for decades.

At the turn of the 21st century former 20th Century Fox honcho Bill Mechanic lamented in a magazine interview that no studio would support the film now because the radical shifts in mood would be hard to sell to backers, even if the film would be for the ages. Thankfully, Wilder gave his middle finger to convention when he did.

A 60th anniversary DVD of The Apartment had just been released.