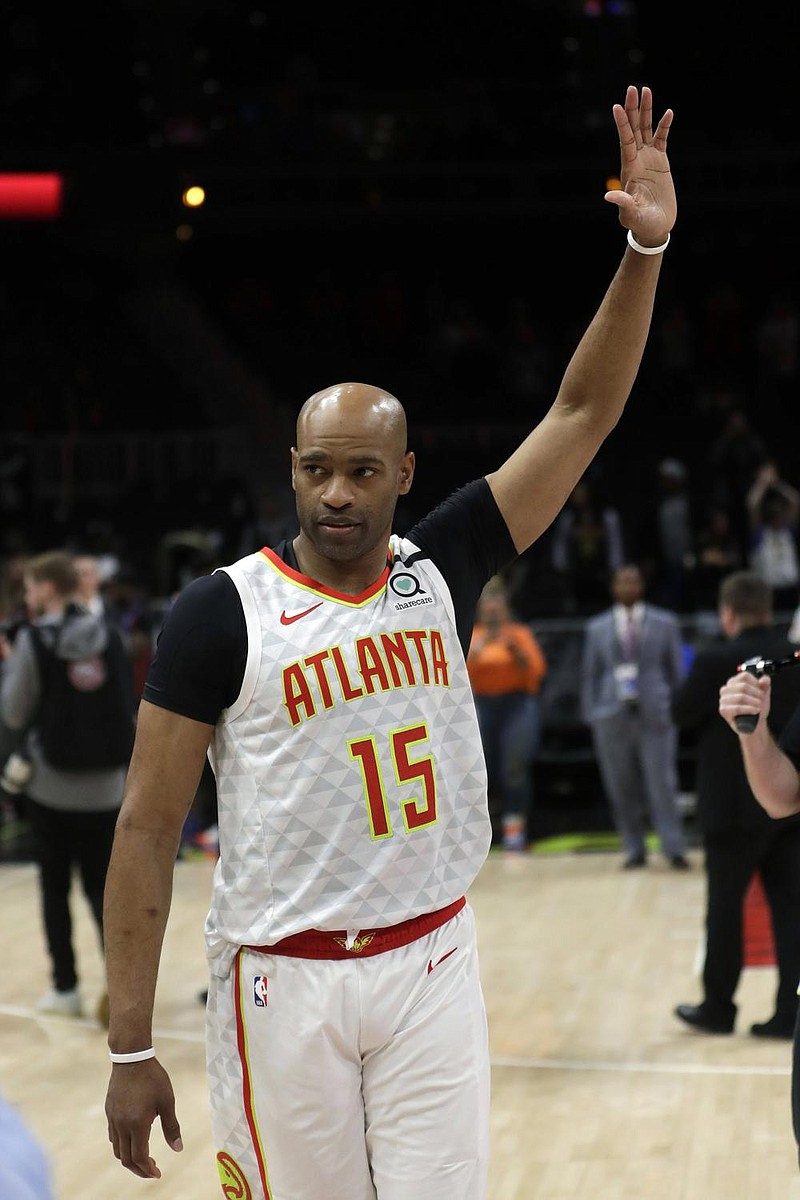 In this March 11, 2020, file photo, Atlanta Hawks guard Vince Carter (15) waves to the crowd as he leaves the court following an NBA basketball game against the New York Knicks, in Atlanta. Carter made his retirement official Thursday, June 25, 2020, announcing on his podcast that his 22-year NBA career has come to an end. (AP Photo/John Bazemore, File)

Hall of Fame game called off

The NFL on Thursday canceled the Hall of Fame game that traditionally opens the preseason and is delaying the 2020 induction ceremonies for a year because of the coronavirus pandemic. The Aug. 6 exhibition game in Canton, Ohio, between the Dallas Cowboys and Pittsburgh Steelers is the first on-field event the league has canceled during the pandemic. It will be played on Aug. 5, 2021, with the same teams. Enshrinements for 20 men scheduled for this year now will occur on Aug. 7, 2021, with the 2021 inductees going into the Pro Football Hall of Fame the next day. Former NFL Commissioner Paul Tagliabue, NFL Films co-founder Steve Sabol, former New York Giants executive George Young, former coaches Jimmy Johnson (Arkansas Razorbacks) and Bill Cowher, and former players Troy Polamalu, Steve Hutchinson, Edgerrin James, Isaac Bruce and Steve Atwater (Razorbacks) were to be inducted into the hall this August.

Vince Carter made his retirement official on Thursday, announcing on his podcast that his 22-year NBA career has come to an end. The announcement was largely a formality because the 43-year-old Carter had said many times over the course of this season that this would be his last in the NBA. His 22 seasons are the most in league history, and he became the first NBA player to appear in four different decades. Carter appeared in 1,541 NBA games, behind only Robert Parish (1,611) and Kareem Abdul-Jabbar (1,560) on the league's all-time list. He started his career with Toronto, then played for New Jersey, Orlando, Phoenix, Dallas, Memphis, Sacramento and spent his final two seasons with Atlanta. Carter's first season was the 1998-99 campaign, which was shortened to 50 games because of labor strife. His final season was shortened by the coronavirus pandemic, and the Hawks will not be part of the 22 teams headed to the Disney complex near Orlando, Fla., next month for the planned resumption of NBA play. Carter scored 25,728 points in his career, 19th-most in NBA history.

The New York City Marathon scheduled for Nov. 1 has been canceled because of the coronavirus pandemic. New York Road Runners announced the cancellation of the world's largest marathon after coordinating with the mayor's office and deciding the race posed too many health and safety concerns for runners, volunteers, spectators and others. Last year's marathon included a world record 53,640 finishers. Entrants for the 2020 race will be offered a full refund of their entry fee or a guaranteed entry to either the 2021, 2022 or 2023 marathon. The 2021 New York City Marathon is scheduled for Nov. 7.

Liverpool is champion of England again. Liverpool clinched its first league title since 1990 on Thursday, ending an agonizing title drought without the players even having to take the field. Instead, the Premier League crown was secured when Chelsea beat second-place Manchester City 2-1, a result that means City can no longer catch Liverpool with seven games remaining. For the city of Liverpool, this has been a party three decades in the making, but the ongoing restrictions caused by the coronavirus meant fans were unable to celebrate in large crowds. Only a few dozen fans were outside as the final whistle blew, setting off fireworks and chanting. After a dominant campaign that was interrupted by the coronavirus pandemic, Liverpool became England's earliest-ever champion -- and the latest. No team since the inception of the country's league system in 1888 has clinched the title with seven games remaining. And no team has been crowned Premier League champion in June.