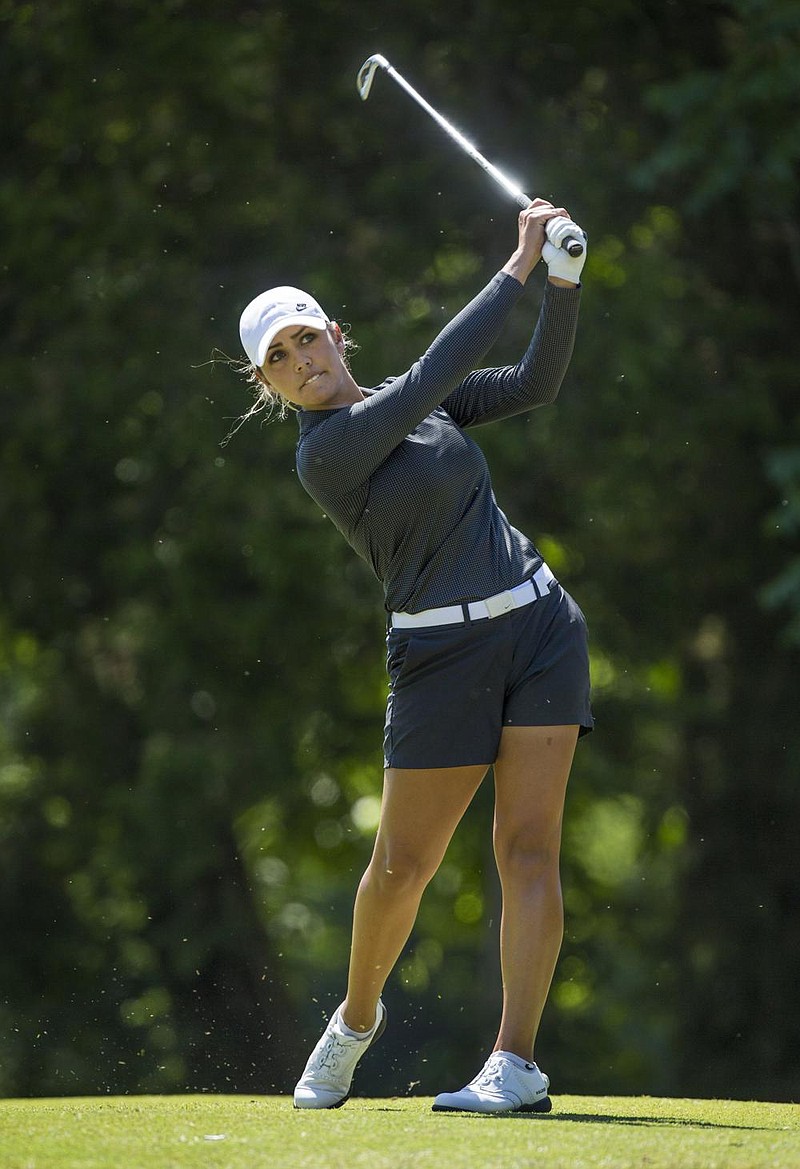 Ana Paula Valdes of Mexico, a first-year player on the Women’s All Pro golf tour competing in the NWA Charity Classic this week in Bella Vista, sprung into action to save a woman from drowning Monday at Loch Lomond Lake. (NWA Democrat-Gazette/Ben Goff)

BELLA VISTA — Ana Paula Valdes was relaxing as the waves from Loch Lomond Lake splashed against the shore Monday evening when the peace was suddenly disturbed by a loud commotion in the nearby wooded area.

Valdes, a first-year player on the Women’s All Pro Tour competing in the NWA Charity Classic this week in Bella Vista, had just completed a practice round at the Scots-dale Golf Course. After the round, Valdes and her boyfriend, Alberto Doniga, retired to the home of host family Kathy and Maurice King, who live high above Loch Lomond.

Valdes, 23, said she had not taken a bite when she heard a loud noise in the wooded area between the King house and a neighbor’s house that sounded like a tree was falling. She realized the noise she was hearing was a golf cart that was traveling at a high rate of speed down the steep embankment toward the lake below.

Kathy King said the cart jumped a railroad tie and became airborne, then crashed through a wooden fence as it hurled down the embankment.

“I didn’t see where the cart ended, but I knew that she flew down, and I knew that there was water at the bottom,” Valdes said. “I didn’t really think about it twice. I just started sprinting that way. I told my boyfriend to call 911 and go get help because I knew it was going to be pretty bad.”

Valdes said as she neared the bottom of the incline that she saw the golf cart had crashed into a tree, stopping just short of the water. There was no sign of the driver, Valdes said.

Valdes said she looked out into the lake and saw a person floating face down about 30 feet from shore. Kathy King said the momentum of the cart traveling down the embankment, then slamming into a tree likely caused the woman to be propelled through the front of the golf cart and into the lake.

“I said, ‘Oh my god, that’s the lady,’ ” Valdes said. “So I jumped in the water and started swimming her way. I finally got to her and I tried putting her face up against my chest. I was swimming because I could not touch the bottom. It was deeper than I could stand.

“So I was swimming, trying to keep her face out of the water. I was trying to wake her up because she was unconscious. I kept saying, ‘you’re OK, you’re OK.’ ”

Still out in the deep water, Valdes said she was struggling to get back to shore with the woman. The former Clemson golfer who is playing in her fourth professional event said she was frantically screaming for the people back at the King house to get help.

King made the 911 call, while Maurice King and Doniga, a caddy on the Korn Ferry Tour, raced down to the lake. Doniga jumped in the water to try and assist Valdes in bringing the woman to shore, Valdes said.

“We were both swimming with her to try and bring her in,” Valdes said. “We were trying to be careful because we knew she was hurt and I did not want to rough her up.”

Maurice King grabbed a kayak that was near his boat dock and extended it out as a flotation device. Valdes and Doniga were able to bring the woman in by hanging on to the kayak.

“When Donny and I got down there, Ana was already down there,” King said. “He went in the water, and I knew it was over their head and mine, too. I did get in the water with them, but we had kayaks there, so I just pushed a kayak out to them so that we could all hold on to it, that’s all. It was just something we could all hold on to until we got them back to the dock.”

Valdes said the woman had noticeable injuries to her head, face, arms and leg. The woman, whose name is being withheld, was transported to a local hospital where she remains. Details of her injuries are not known. Her immediate family declined interview requests for this story.

“We knew she was beaten up pretty bad, so we didn’t want to move her around,” said Valdes. “We barely got her to the edge and decided to wait for the paramedics to get there.”

Because of the steep terrain from the lake to the top of the embankment, it took four paramedics to carry the woman to the ambulance parked on the street above, Valdes said.

Kathy King said if Valdes and her boyfriend had decided to eat their dinner at another place or even inside the house, the story could have had a much different ending.

“God decided that it wasn’t this lady’s time,” King said. “From inside our house, we would not have seen this happening. She would have been dead. She lives alone and probably would have not been missed until the next day.”

Maurice King said it was sheer luck that the young couple was on the back deck at the time to see the events unfolding.

“If it had been another two minutes later, we would never have known it happened,” he said.

Valdes, who started playing golf at the age of 5 and is friends with former University of Arkansas golfers Gaby Lopez and Maria Fassi, said she has never been trained in CPR or life-saving techniques.

She said once the emergency crew was able to get the woman safely to the ambulance, her emotions began to take over.

“I have never been put in that situation before, but I was glad that I was able to react the way I did,” Valdes said. “I’ve never been trained, but we’ve seen it done in movies.

“I just did what I’ve seen before.”

Valdez played just one round this week before withdrawing from the tournament after shooting a 4-over 76 on Wednesday.