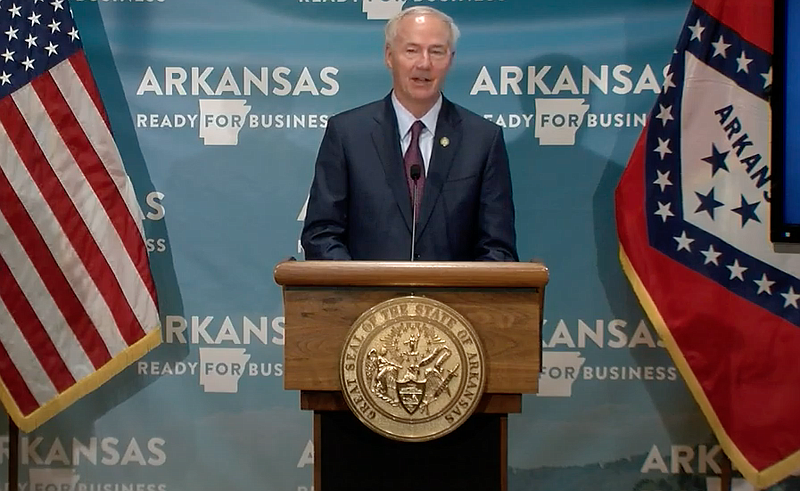 The total number of active cases as of Thursday was 5,695, Smith said. Of those, 104 cases were in nursing homes, 841 were in correctional facilities and 4,750 were in the general population.

So far 12,127 people have recovered from the virus.

He said this offers “hope” that the strategy of increased testing and outreach combined with people taking personal responsibility to social distance and wear masks can slow the spread of covid-19. He added he hopes the trend line will not just plateau but begin consistently going down.

Hutchinson also showed the rate of testing in Washington and Benton counties compared to the state overall. In Benton County, more than 1,200 per 10,0000 residents have been tested, a rate higher than the statewide rate of roughly 925 per 10,000 residents.

In Washington County, though, just over 600 per 10,000 residents had been tested, despite producing the highest number of new cases many days in recent weeks, according to the governor.

Hutchinson said the state would be looking deeper into why fewer people were being tested there but said it may be in part because of language and cultural barriers among minority populations.

He said people may also fear being charged for a test.

Local health units in all Arkansas counties do not charge anything out-of-pocket for covid-19 tests, according to the state Department of Health, though insurance will be billed if patients have coverage.

Gov. Asa Hutchinson and state health officials will provide an update on Arkansas' covid-19 response at 1:30 p.m. Check back to watch the live video.

[Video not showing up above? Click here to view » https://www.youtube.com/watch?v=mg0IgenjK4U]