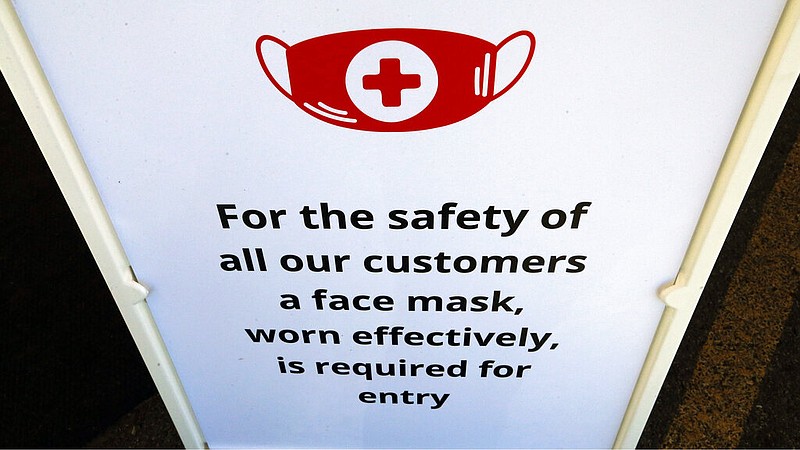 NEW YORK — The number of new coronavirus cases per day in the U.S. stood near an all-time high Thursday, hovering close to the peak reached in late April during some of the darkest and deadliest days of the crisis.

While greatly expanded testing probably accounts for some of the increase, experts say other measures indicate the virus is making a comeback. Daily deaths, hospitalizations and the percentage of tests that are coming back positive for the virus have also have been rising over the past few weeks in parts of the country.

The 34,300 covid-19 cases recorded Wednesday were slightly fewer than the day before, but still near the high of 36,400 reached on April 24, according to a count kept by Johns Hopkins University.

As the virus rises again in the U.S. and other parts of the world, some governments and businesses imposed new restrictions only weeks after lifting shutdowns, even as others areas loosened up.

"There are no magic answers. There are no spells here. You can't divine this away," World Health Organization emergencies chief Dr. Michael Ryan said. "We have to act at every level."

In the U.S., where governors and other politicians have tried to strike a balance between the health risks and the threat to the economy, the number of workers applying for unemployment benefits last week declined slightly to 1.48 million, indicating layoffs are slowing but are still painfully high.

The U.S. has greatly ramped up testing in the past few months, and it is now presumably finding many less-serious cases that would have gone undetected earlier in the outbreak, when the availability of testing was limited and sicker people were often given priority.

But there are other more clear-cut warning signs, including a rising number of deaths per day in states such as Arizona and Alabama.

In an encouraging sign, as of last week the number of deaths per day in the U.S. overall was actually declining, not rising in lockstep with new cases. Experts said that could reflect improved efforts by nursing homes to prevent infections, as well as the advent of effective treatments.

Also, a growing share of the new cases are among young people, who are more likely than older ones to survive a bout with the virus.

The virus has been blamed for over 120,000 U.S. deaths — the highest toll in the world — and more than 2.3 million confirmed infections nationwide. On Wednesday, the widely cited University of Washington computer model of the outbreak projected nearly 180,000 U.S. deaths by Oct. 1.

The governors of New York, New Jersey and Connecticut announced that their states, which were devastated by early outbreaks that appear to be under control, will now require travelers from certain states with high infection rates to quarantine for 14 days upon arrival.

Some states are moving to ensure more consistent use of face masks and other anti-virus measures.

Dr. Peter Hotez, an infectious-disease expert at the Baylor College of Medicine in Texas, said he worries that states will squander what time they have to head off a much larger crisis.

"We're still talking about subtlety, still arguing whether or not we should wear masks, and still not understanding that a vaccine is not going to rescue us," he said.

European nations appear on track to reopen their shared borders by July 1, and the European Union is considering barring American visitors, given the flare-up in the U.S. and President Donald Trump's ban on Europeans entering the United States.

In Paris, meanwhile, the Eiffel Tower reopened to visitors for the first time Thursday after its longest-ever peacetime closure: 104 days.

"It's very special, very special" because of the relative lack of tourists, said Annelies Bouwhuis, a 43-year-old visitor from the Netherlands.

With hospitals overwhelmed in New Delhi, Indian troops provided care at medical wards fashioned from railroad cars. And door-to-door testing is starting in Melbourne, Australia, to control a hot spot there.

In China, where the virus first appeared late last year, an outbreak in Beijing appeared to have been brought under control. China reported 19 new cases nationwide amid mass testing in the capital.

Worldwide, over 9.4 million people have been confirmed infected, and nearly a half-million have died, by Johns Hopkins' count. Experts say the true infection numbers are much higher, in part because of limited testing.