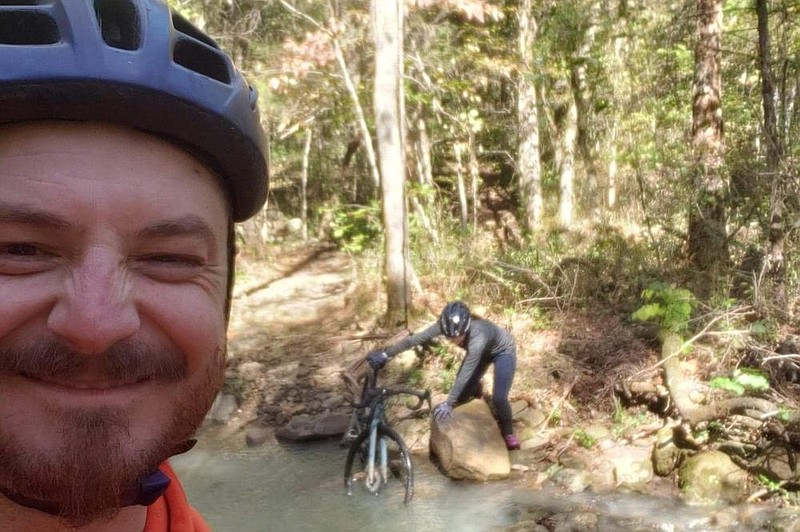 The mischievous grin says it all as Justin Parcell watches Andrea Nevil attempt to cross a creek on a cycling outing. Parcell, 34, died in a kayaking accident on the King's River in May. Courtesy photo Andrea Nevil

Justin Parcell's face was caked in Oklahoma red clay in the selfie photo, but the mud could not hide his infectious ear-to-ear grin.

He was in his happy place, just minutes removed from an epic gravel bike race.

Justin loved the mud and the grit, and he thrived on the competition of bike racing, friends say.

That huge smile was his trademark, but usually, it was Justin who brought a smile to the faces of friends and strangers alike -- although he rarely met a stranger. In the cycling world, there is a kindred connection, riders joined together like the links of a bicycle chain.

From all accounts, Justin seemed to have a handle on adulting. The Prairie Grove High School graduate had inherited some land out in the country after the death of his father, Steve, in March.

"He had been working really hard on the weekends on that land and to get the shop cleaned up," says Andrea Nevel, a close friend of Parcell's. "He was really proud of that."

Free time was rare for Parcell, who was a service manager at Phat Tire bike shop in Springdale adjacent to the Razorback Greenway, and any he had was usually filled with extreme sports with friends. He was particularly fond of street luge, flying down the side of a curvy mountain road, his body literally inches off the pavement.

Nevel describes him as an adrenaline junkie.

Parcell also loved the thrill of the river, cavorting through the fast-moving Ozark Mountain river rapids in his lime green kayak.

On the afternoon of May 17, on a kayaking trip on the Kings River in Madison County, he paddled ahead of the group. That was not uncommon, say his friends. He did everything fast.

According to witnesses, Parcell got caught up in a whirlpool and never surfaced. He drowned before the group could get to him.

Justin woke up early that Sunday morning with a stomach ache, Nevel says. He considered skipping the kayaking excursion, but the thrill of the fast-moving water after a heavy spring rain was something he could not pass up.

"I had heard from him that day at about 3:45," Nevel says. "They were about to take off. I told him I was glad he was feeling better and that he was out kayaking because he loved it."

When hours passed and she had not heard from Parcell, Nevel says she figured he'd dropped his phone in the water.

She did not start to become concerned until later, and she reached out to some other friends to see if they'd heard from him.

"But his mom has cancer so one of my first thoughts was maybe something had happened to her. I sent that person a message. I didn't even know them, and they replied back that 'he's gone.'"

Nevel says she drove to Parcell's house in Fayetteville and walked in to see his roommate and a next-door-neighbor sitting on a couch.

"The three of us just started crying," she says through tears. "I just dropped to the floor.

"There were so many times I would tell him to be careful or be safe. That day, I never uttered those words once. I never dreamed there would be any danger."

A report from the Madison County Sheriff's Office says two members of Parcell's group pulled him from the water and tried to administer CPR, which proved unsuccessful.

"I don't know much about kayaking," Nevel says. "I heard different things. I heard it was a manmade bridge that he dropped off and went under and there was a whirlpool that he could not get out from under. I also have heard that there were some branches and things he got caught up in.

"His clothes were really ripped up."

Three weeks after his death, the shock had still not worn off for Parcell's friends in the biking community.

Blake Kingfisher, who developed a fast friendship with Justin over their love of bike racing, knew his friend would not want just an ordinary funeral. So he helped organize a group bike ride with the Springdale Bike Club from the Phat Tire shop in Springdale to Parcell's celebration of life service in Lincoln, about 30 miles.

"This is about as impromptu as it gets," Kingfisher said as the group was gathering on June 6. "This is how he would want it. No plan, just show up and say f--- it, let's go."

The bikers fastened laminated images of their friend to their cycling jerseys. Before they clipped in for the ride, they all shotgunned a beer as a tribute to their fallen teammate.

"He was one of the most unique persons I have ever met," says Phat Tire Manager Grant Holcomb. "It's never going to feel the same, just a huge hole. It's going to be different for a long time. He was irreplaceable and one of the greatest guys I've ever met."

Katie Schneider, the owner of Trailside Coffee Shop, tried to hold back her emotions as she described her friendship with Parcell. They worked in essentially the same space for more than three years.

"He was just one of those guys that would give you the shirt off his back," she says. "I think he knew everybody in Springdale -- or it seemed like he did."

Bret McCormick was a relative newcomer to two-wheel travel when he met Justin. The 57-year-old newspaper publisher from the Texas panhandle town of Vernon had just taken up cycling as a hobby two years ago.

"Our children moved up here to Northwest Arkansas for work and half of our grandchildren live here," McCormick said before the memorial ride. "We'd never ridden bikes until we started coming up here."

He was smitten with the sport from the beginning.

McCormick bought his first bicycle from the Phat Tire shop on the Bentonville square and began navigating the Razorback Greenway, the region's cycling superhighway that connects Bella Vista to Fayetteville, over 40 paved miles of cycling bliss.

The explosion of cycling growth in the region is what brought McCormick and Parcell together, in a round-about way.

"I could not get my bike in for service in Bentonville, so I ended up bringing it down here, and that's how I met him," says McCormick, who makes the trip from Vernon to Bentonville about once a month. "I met some of the members of the Springdale Bike Club, and Justin was very active in that club. I joined their Tuesday Taco rides, and the next thing you know, I'm in the Springdale Bike Club."

McCormick's bright yellow Salsa bike was loaded with extra bags and essentials on the day of Parcell's memorial service. McCormick has been training for a ride that will take him from the Mexico border to Banff, Canada, and Parcell was helping him with almost every aspect of the preparation, from the bike purchase to the training.

McCormick says he had planned on joining Parcell and Nevel for the 107-mile Mid South gravel race in Stillwater, Okla., in March, but his wife's surgery prevented that.

"The Mid South is known for its red muddy roads, and nobody wanted it to rain or be muddy," McCormick says, then adds, "except for Justin. He wanted it to be muddy."

McCormick says Parcell was a natural coach, always pushing people to improve and get faster.

He will carry the memory of his friend on his Great Divide ride, a 2,600-mile epic that will feature 200,000 feet of elevation and loss, according to the ride's website. The bike he will pedal is McCormick's link to his friend.

As the bikers gathered on the greenway for their memorial ride, several paused to say a few words about their cycling teammate.

"All morning long we have been dreading this," Kingfisher, 29, said. "We're riding out to say goodbye to our best friend."

And with that, the only sound that could be heard was the metal-to-metal click of their cycling cleats fastening securely to the pedals on their bikes.

In single-file, they began the 30-mile ride under a glaring sun, a tribute their friend would have appreciated.

Justin Parcell was an avid kayaker and enjoyed the thrill of the rushing water from the Ozark's rivers. He was killed in a kayaking accident in May on the Kings River in Madison County. Courtesy photo Andrea Nevel 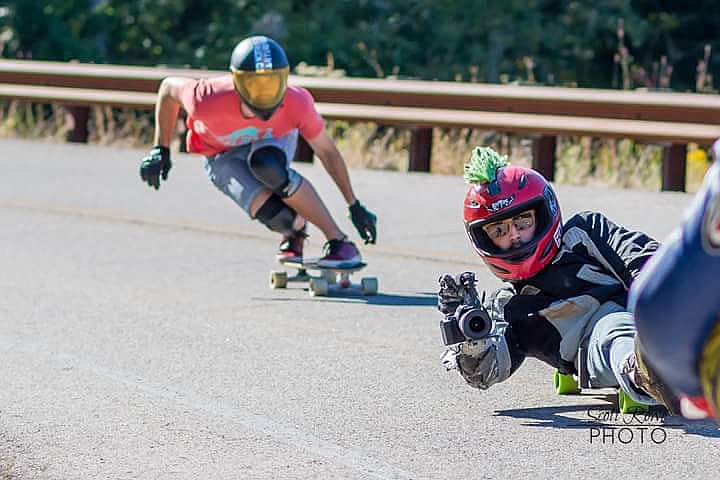 Justin Parcell slides down a mountain road on a street luge while being pursued by a skateboarder. Street luge was a favorite extreme sport for Parcell, who died in a kayaking accident in May. Courtesy photo Scott Rowe 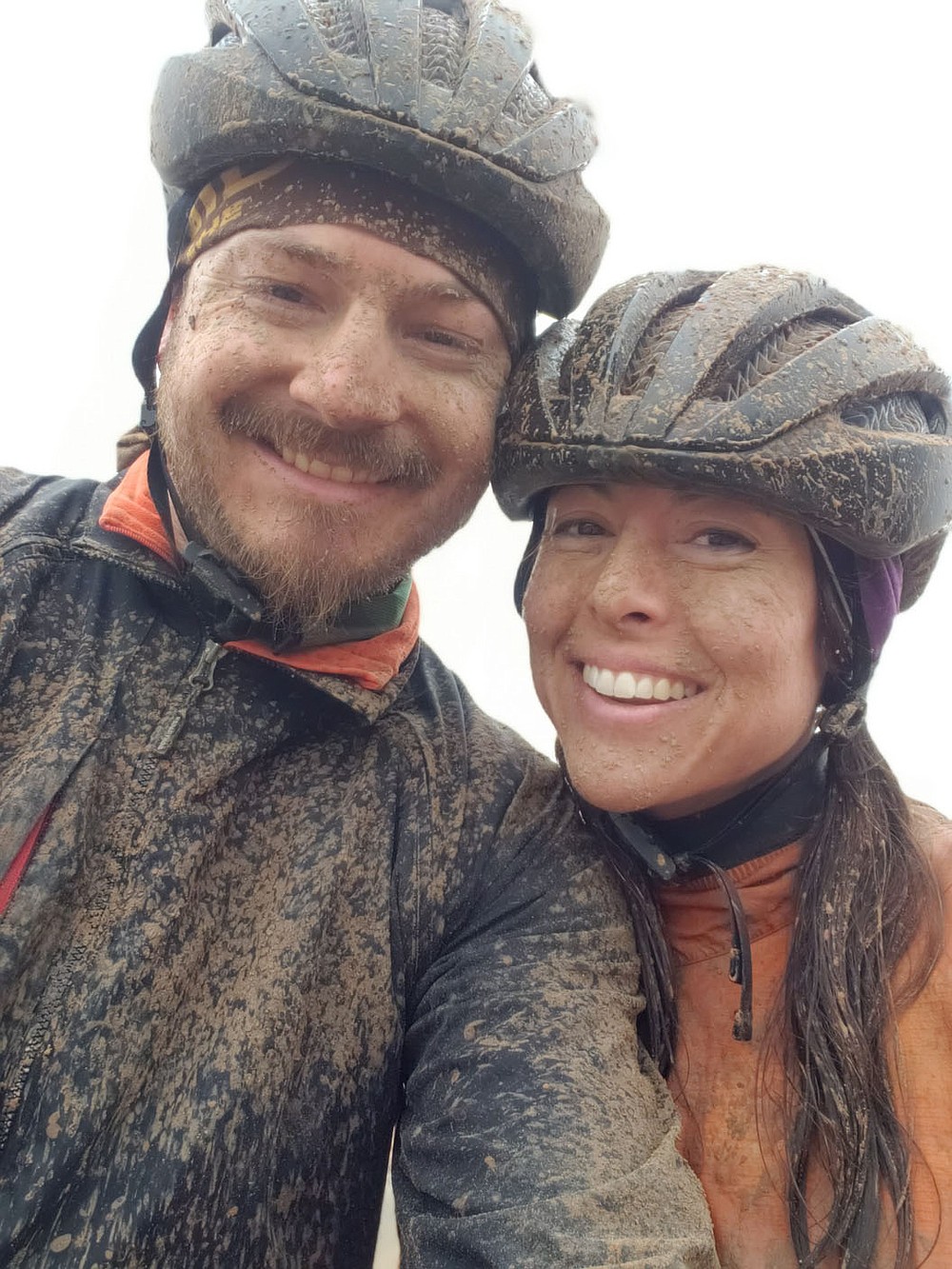 Justin Parcell and Andrea Nevel are caked in mud from the racing in a gravel bicycle event. Parcell, 34, died in a kayaking accident in May on the Kings River in Madison County. Courtesy Photo Andrea Nevel 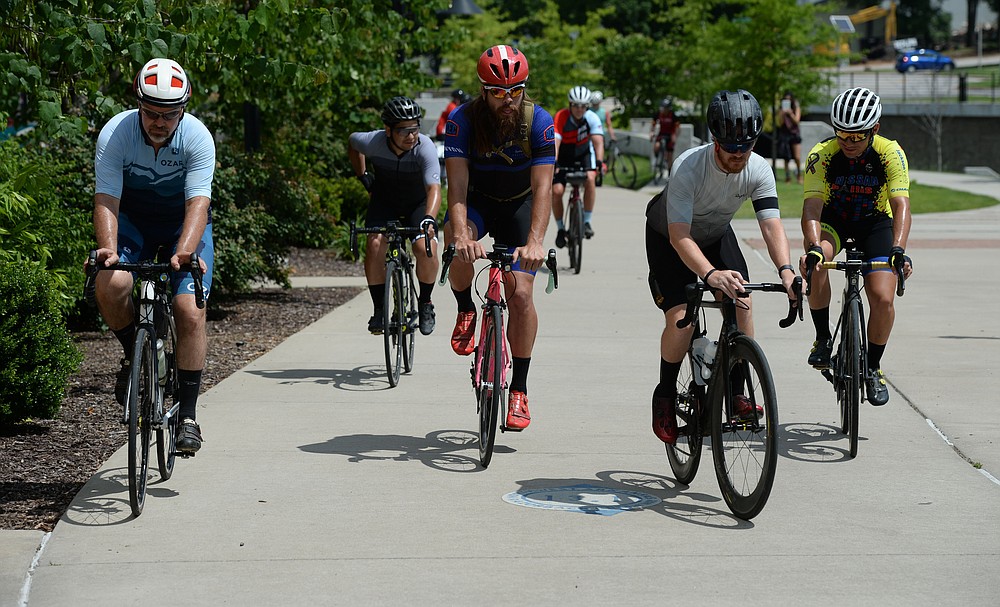 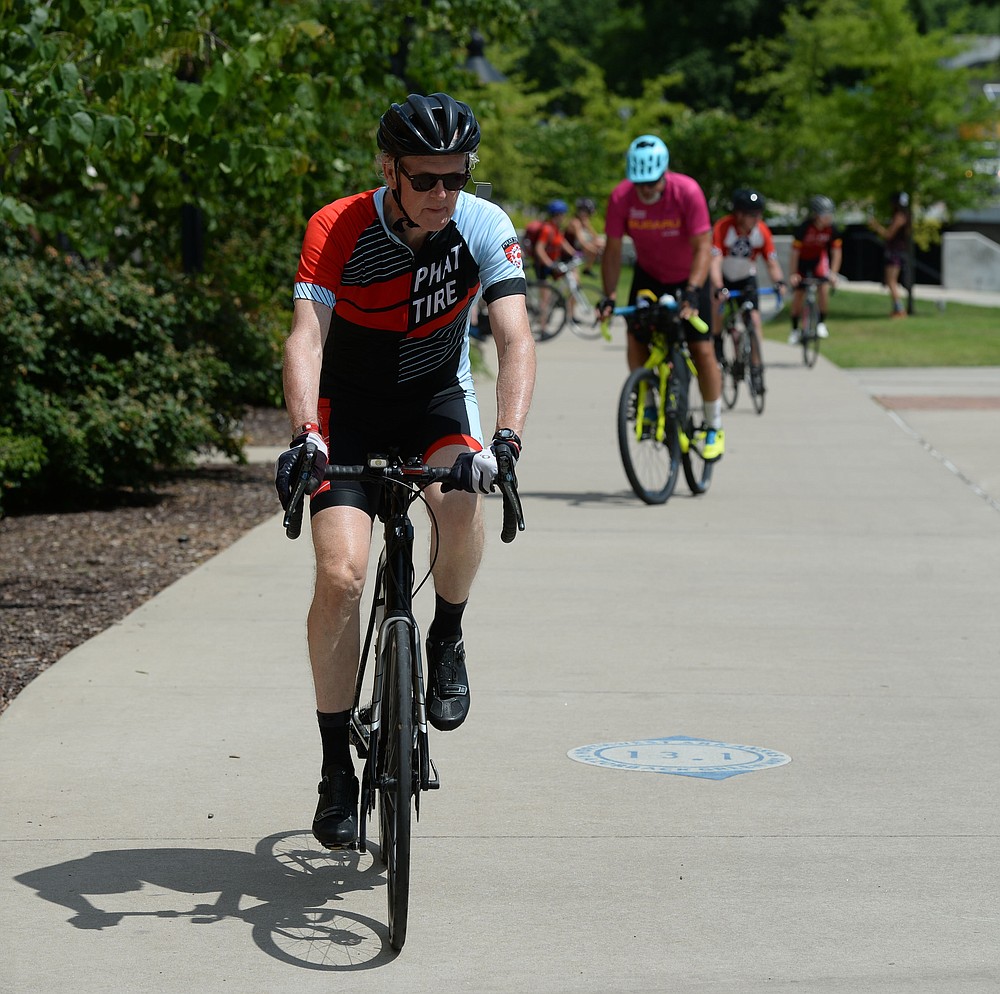 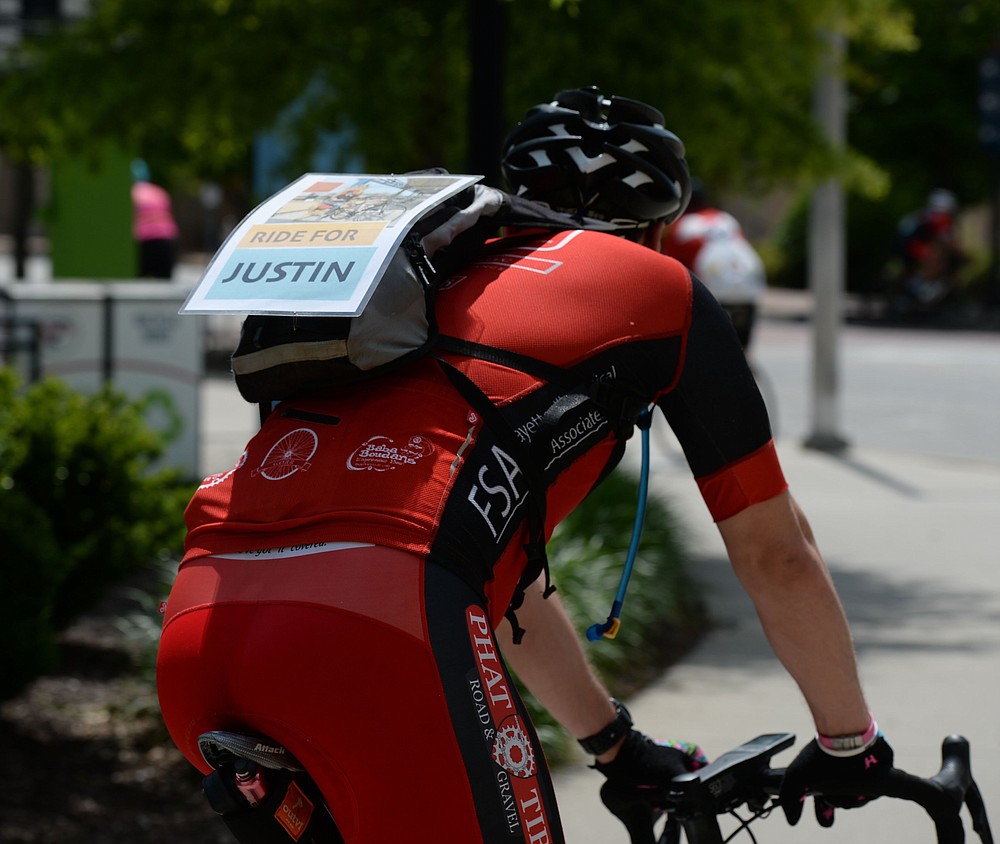 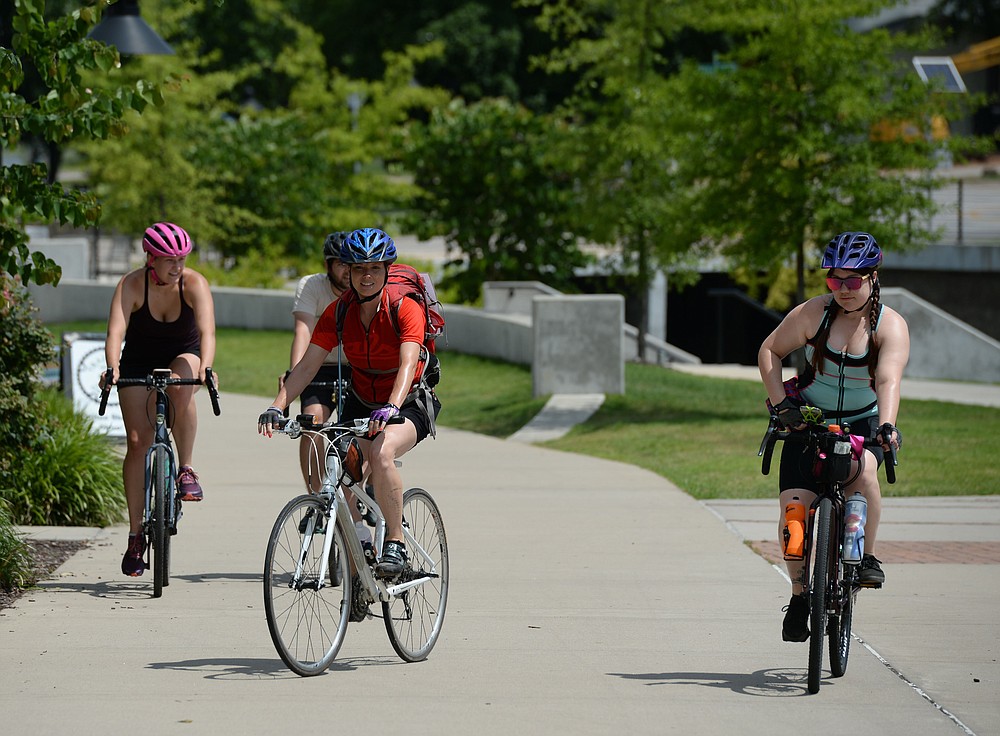 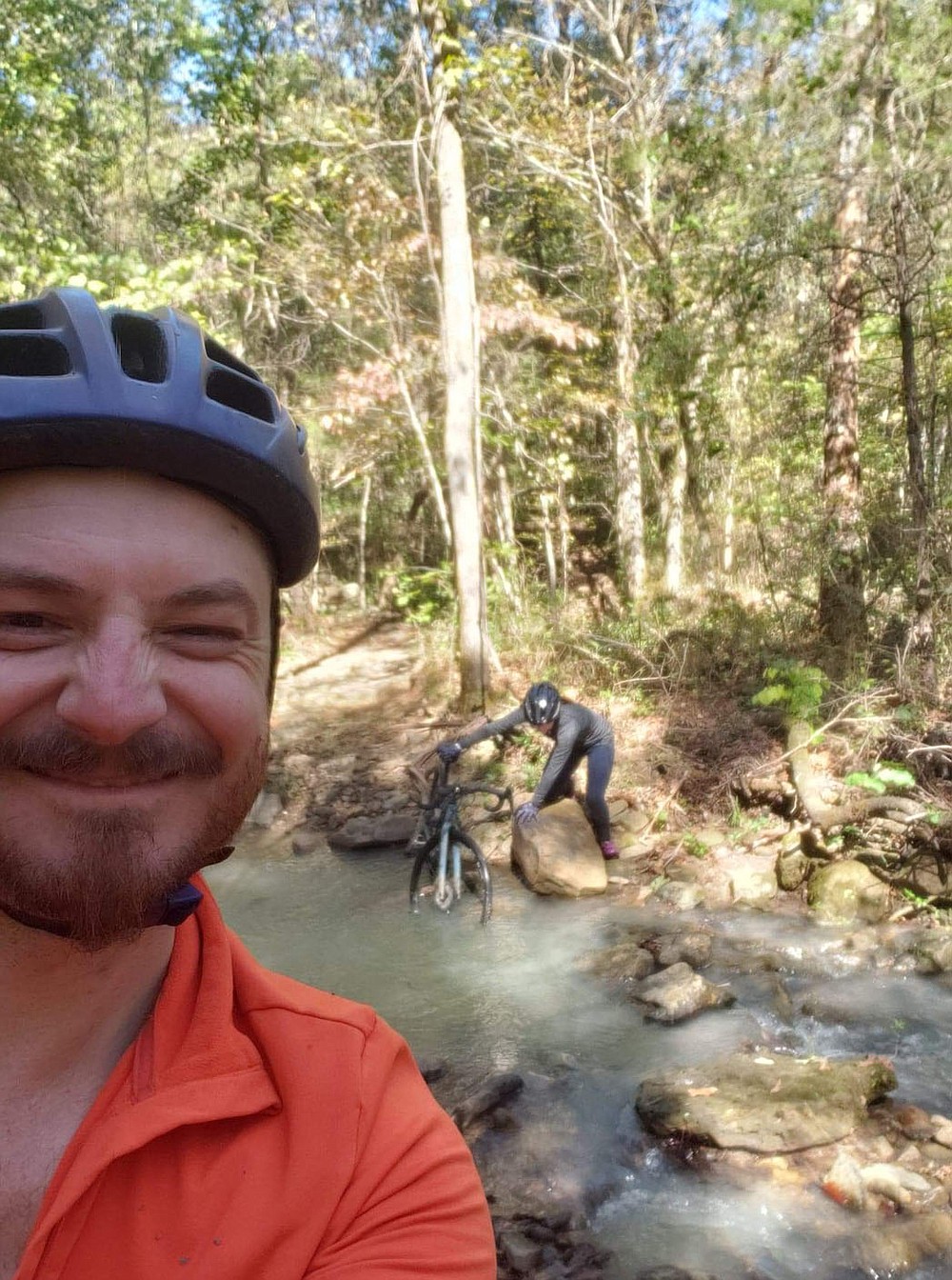 The mischievous grin says it all as Justin Parcell watches Andrea Nevel attempt to cross a creek on a cycling outing. Parcell, 34, died in a kayaking accident on the Kings River in May. Courtesy photo Andrea Nevel
More News