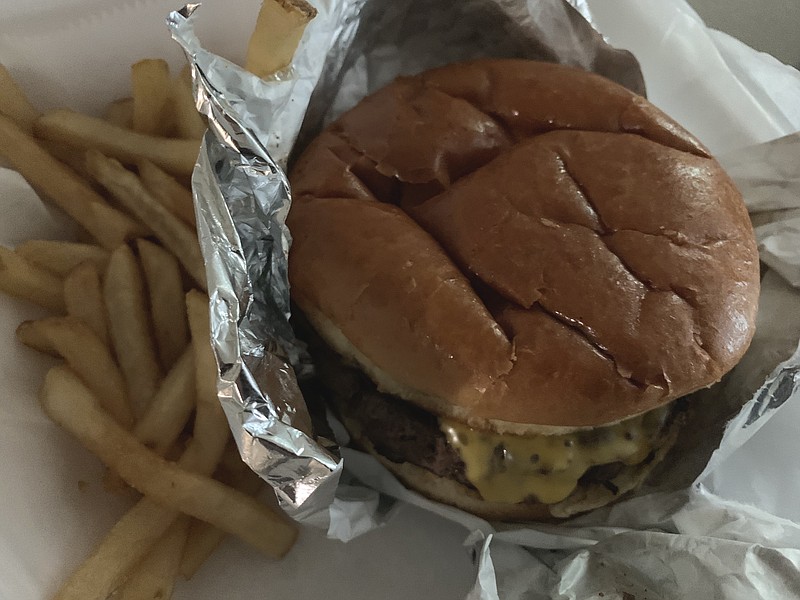 Restaurant dining has been what we did for decades, and nobody has been looking forward to the reopening of dining rooms more than we have. Well, except that with rising rates of coronavirus cases showing up in this as well as many other states, we're not yet ready to throw caution ⁠— or our masks ⁠— to the winds.

To put it another way, we don't want the catch of the day to be covid-19.

Thus, another week of Takeout Tastings, one dish per locally owned establishment, geographically positioned so hot food is still hot or close to it when we get it home, and ⁠— as with all our reviews ⁠— fully paid-for upfront.

WHAT WE GOT: Shrimp Chipotle ($14.89), seasoned grilled shrimp with chipotle sauce and onions, served with a side of rice and salad. We suggested in our original review of this restaurant when it opened last summer that it probably wouldn't be a good fit for folks who like their Mexican food spicy: "Most of what we tried was subtly flavored but definitely not fiery." That certainly isn't true of this delightful dish, which while not mouth-searing, had a definite kick, between the seasoning on the shrimp, grilled with onions in what is closer to a chipotle broth than a sauce. The rice had a nice kick to it too. Dollops of guacamole and sour cream and a little pico de gallo topped the mostly iceberg salad.

HOW IT WENT: The dining room has been open for a few weeks, so we placed and paid for a walk-in order, which came out of the kitchen in about eight minutes. Our server was masked and gloved, although we observed another server whose mask wasn't properly arranged over his nose and mouth.

HOW IT'S GOING: There were about a dozen occupied tables in the dining room at the peak of the lunch period. 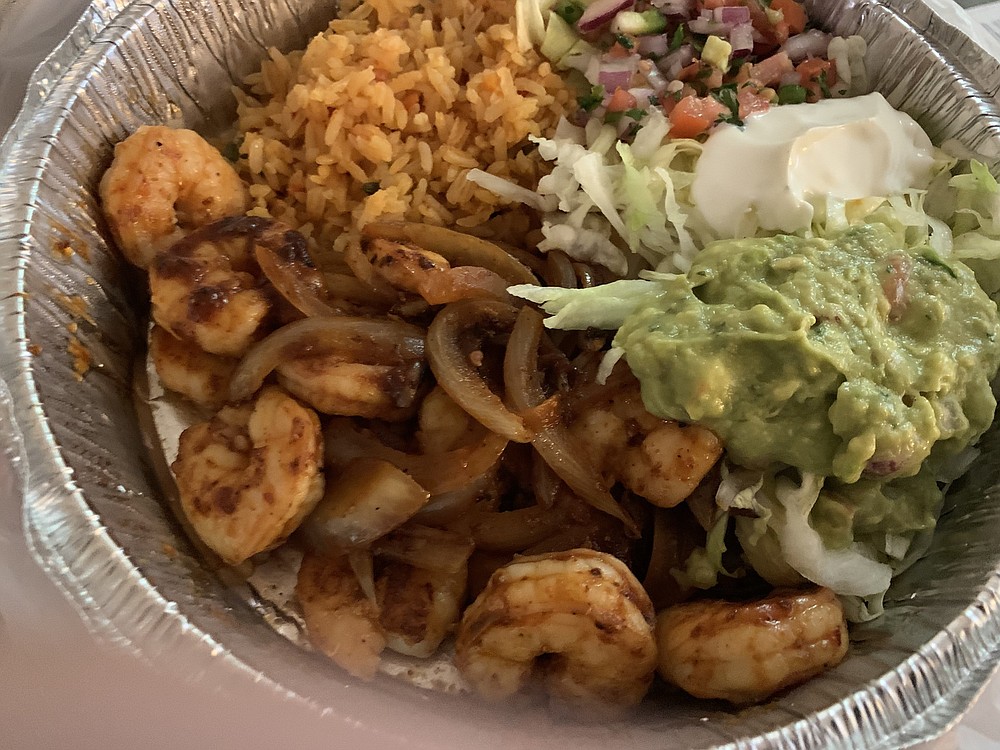 The Shrimp Chipotle from El Mezcal gets a nice kick from the seasoning on the grilled shrimp and the chipotle broth. (Arkansas Democrat-Gazette/Eric E. Harrison)

WHAT WE GOT: A medium Italian sausage and mushroom pizza ($15.25). There's something old-fashioned about Old Mill's pizza: So far, there's just one type of crust and one red sauce, with the usual variety of toppings. A small pie is 10 inches in diameter, a medium 13 inches and a large, 15 inches. The crust, American-style, not Neapolitan, is puffy but not bready, firm on the bottom, turned up and crisp on the rim. There's not a lot of sauce, but there's enough and it has a good flavor, accented by spices sprinkled over the top. The toppings were plentiful and thickly applied; we were given a choice of mushrooms, fresh or canned, when we ordered ⁠— not much of a choice, really, though we guess somebody must prefer canned mushrooms on their pie ⁠— and the sausage was vibrant with sage.

HOW IT WENT: The pizzeria, named for its Lakewood proximity to North Little Rock's biggest tourist attraction, has been open for just over a week and is in the process of expanding its hours and its menu options, which so far focus on whimsically named specialty pies, including an all-meat pie (pepperoni, Italian sausage, beef, Canadian bacon and chicken) aptly called the "Rob Reiner," whose All in the Family character was derisively dubbed "Meathead." There's a take-and-bake option and a few salads. The dining room has been open for lunch; an online ordering system was still a work in progress last week, so we placed our order by phone and had a two-minute wait beyond the promised hand-over time. The pizza was still hot by the time we got it home, a trip of approximately 12 minutes. Our server wore a mask, but not everybody in the kitchen did.

HOW IT'S GOING: There were about a half-dozen active tables during a late-week lunch visit. 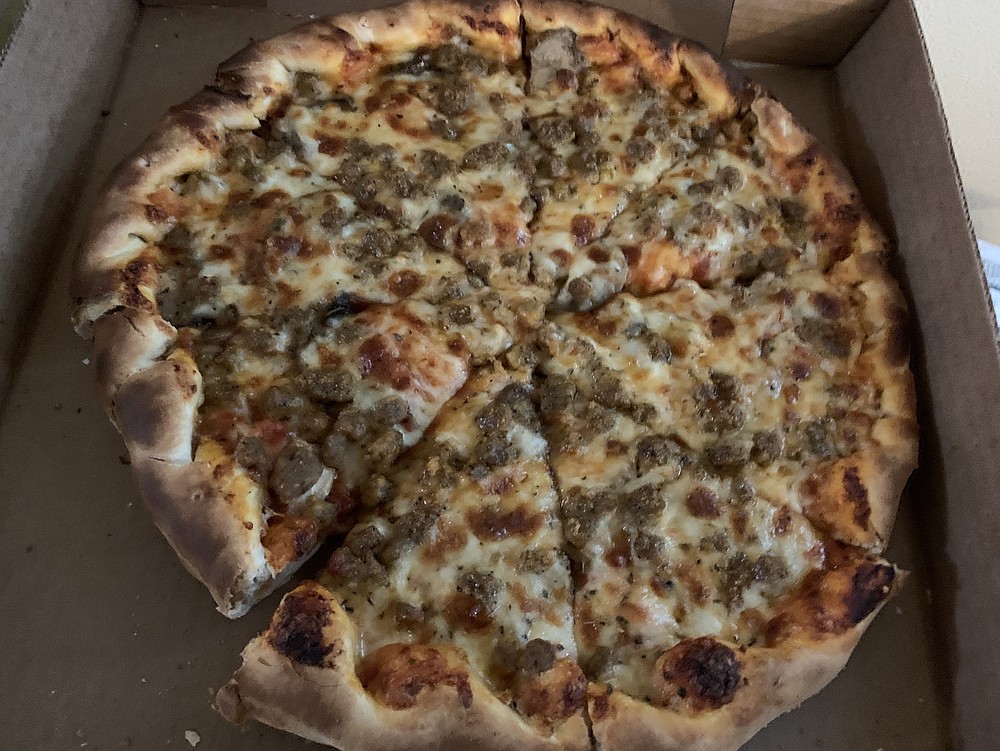 The toppings are thickly applied over a layer of red sauce and puffy crust on our medium Italian sausage and mushroom pizza from the new Old Mill Pizza in North Little Rock. (Arkansas Democrat-Gazette/Eric E. Harrison)

WHAT WE GOT: Steak Knife Three-Cheese Burger ($11.99). The menu offers nine "regular" burgers, including two made from plants, with these "super-burgers" in a separate category: ½-pound Angus beef patties, "ground fresh, never frozen ... straight off the grill on a toasted brioche bun with crisp leaf lettuce, juicy tomato, sliced dill pickles and purple onions" and served "with our famous fries." We got this one, topped with melted Swiss, American and Cheddar. The burger was cooked medium-well and seasoned just enough to keep it interesting and flavorful throughout without obscuring the flavor of the meat ⁠— not always the case with a patty that size. The cheese was just the right degree of gooey-ness. We had the kitchen hold the veggies, put the pickle slices on the side and add a couple of side mustard packets that we decided after a bite or two that we didn't need. The fries were tasty but rather flabby. Other Steak Knife options (all also $11.99) include Mushroom & Swiss, Bacon Cheddar Ranch, Smokehouse (topped with Cheddar, applewood bacon and barbecue sauce) and Firehouse (topped with two slices of jalapeno jack cheese, sauteed bell peppers, jalapenos and chipotle mayonnaise, with a side of habanero hot sauce).

HOW IT WENT: Purple Cow is now a mini-chain but the one on Cantrell Road is the original, so we're stretching our nonchain rule a bit again. The dining room is open but we ordered over the phone and paid on arrival, at which point our order was ready and waiting. The server at the counter wore a mask and gloves.

HOW IT'S GOING: The dining room was busy, at limited capacity, at lunch and there was one other to-go order awaiting pickup.