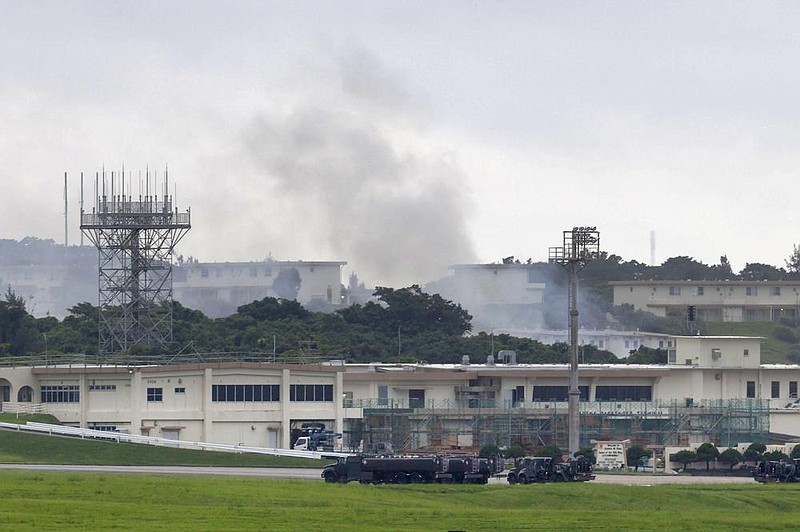 Smoke rises Monday morning from the 18th Wing Hazardous Materials Pharmacy building at Kadena Air Base on the island of Okinawa, Japan. The cause of the fire is still unknown, the U.S. Air Force said. (AP/Kyodo News)

TOKYO -- A fire broke out Monday in a storage building for hazardous materials at a major U.S. air base on Japan's southern island of Okinawa, slightly injuring dozens of personnel who were exposed to smoke or chlorine gas, the U.S. military said.

The blaze began in the morning in the building at Kadena Air Base and was extinguished several hours later, the Air Force said.

Japanese television showed thick gray plumes of smoke billowing from the building, called the 18th Wing Hazardous Materials Pharmacy. The area was closed off and personnel were evacuated as firefighters battled the fire, the Air Force said.

About 45 people were exposed to smoke and chlorine gas from the fire; they were treated and most have returned to duty, the Air Force said.

The cause of the fire is still unknown, it said. It said bio-environmental experts and emergency personnel remained at the site to monitor the aftermath and ensure there was no risk to the community.

Kadena is the largest U.S. air base in the Far East.

More than half of about 50,000 U.S. troops in Japan are stationed on Okinawa under a bilateral security pact. Many residents of Okinawa have complained about environmental hazards, noise and crime related to the U.S. military presence. 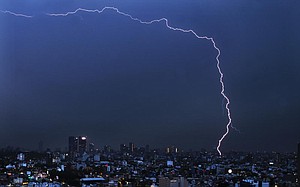 Photo by AP
A bolt of lightning strikes Monday during an early morning storm in Mexico City. (AP/Marco Ugarte)

DUBAI, United Arab Emirates -- Saudi Arabia said Monday that this year's hajj will not be canceled, but that in the coronavirus pandemic, "very limited numbers" of people will be allowed to perform the major Muslim pilgrimage.

The kingdom said that only people of various nationalities already residing in the country would be allowed to perform the hajj.

The government did not specify how many people would be permitted to take part.

The annual pilgrimage, which is set to begin this year at the end of July, traditionally draws about 2 million Muslims from around the world for five intense days of worship and rituals in Mecca.

Saudi Arabia has never canceled the hajj in the nearly 90 years since the nation's establishment.

It halted the minor umrah pilgrimage, which can be performed year-round, in February, as the coronavirus began spreading across the region.

SAN JUAN, Puerto Rico -- A vast cloud of Sahara dust is blanketing the Caribbean as it heads to the U.S. with a size and concentration that experts say hasn't been seen in half a century.

Air quality across most of the region fell to record "hazardous" levels, and experts who nicknamed the event the "Godzilla dust cloud" warned people to stay indoors and use air filters if they have them.

"This is the most significant event in the past 50 years," said Pablo Mendez Lazaro, an environmental health specialist with the University of Puerto Rico. "Conditions are dangerous in many Caribbean islands."

Many health specialists were concerned about those battling respiratory symptoms tied to covid-19. Lazaro, who is working with NASA to develop an alert system for the arrival of Sahara dust, said the concentration was so high in recent days that it could even have adverse effects on healthy people.

Extremely hazy conditions and limited visibility were reported from Antigua down to Trinidad & Tobago, with the event expected to last until late today. Some people posted pictures of themselves on social media wearing double masks to ward off the coronavirus and the dust, while others joked that the Caribbean looked like it had received a yellow filter movie treatment.

Jose Alamo, a meteorologist with the U.S. National Weather Service in San Juan, Puerto Rico, said the worst days for the U.S. territory would be Monday and today as the plume travels toward the U.S. southeast coast.

The main international airport in San Juan was reporting only 5-mile visibility.

Serb given 22 years for abuses in war

The Prizren court sentenced Darko Tasic for desecration of corpses and also for participation in the illegal confiscation and looting of people's property in the village of Krusha e Vogel, 55 miles west of the capital, Pristina.

Witnesses testified seeing Tasic and his father gather up bodies from a massacre in March 1999, put them in a truck, set it on fire and push it into the Drini River.

Other witnesses told how Tasic looted houses and then set them alight. He was ordered to pay financial compensation to one ethnic Albanian family.

Tasic, who was arrested in November 2017, has denied the charges, but it is not clear whether he will appeal the verdict.