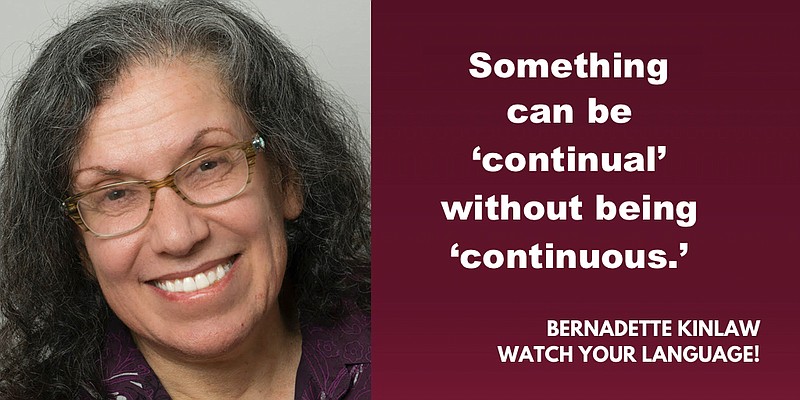 This week, I'll expound on a book I mention often: The Associated Press Stylebook. It guides newspaper people on how to keep language matters consistent.

It's a massive book that clarifies things you didn't know needed clearing up.

Here are some examples:

When you're writing about academic degrees, you use an apostrophe with "bachelor's degree" or "master's degree." But you don't use the possessive for when you're being more specific. It's Bachelor of Arts or Master of Science.

"Continual" means an ongoing repetition. But "continuous" means something goes on and on with no interruptions.

The prefix "pan-" means all. A pandemic is a disease that affects all people around the world. But if pan- is used with a proper noun, it gets a capital letter and hyphen. Examples are Pan-African and Pan-American.

One strange thing about the Stylebook is that you sort of need to know what's in there so you know to look it up. (A similar problem is when you try to look up something in the dictionary when you don't know how to spell it.) So, I know there's a rule for academic degrees, but I still have to look it up in the Stylebook to check what the rule is. When I was in grad school, one professor made us study an extensive rundown of things we should check. And, ideally, editors review the whole book for future reference.

Several times a day while I'm editing, I'll see something I know I should look up. Is it Korean War? Yes. But when I first started working at a newspaper, it was still the Korean war or the Korean conflict. I don't know when the rule changed, but I still need to look it up repeatedly to confirm that the w is uppercase.

Having the Stylebook online has changed the life of editors. Sometimes an entry isn't exactly where you think it will be. But with the online search function, you get a list of each place your word can be found. (Note that you have to pay for a subscription to unlock these AP secrets.)

The AP Stylebook regularly updates items in the book. The editors send out lengthy emails about the changes. I always try to read the entire email, but I often get distracted halfway down the list. Luckily, a month could go by, and I'll see something in a story that clicks inside my faulty brain. It reminds me to look up that thing in the Stylebook. I am grateful for these clicks.

Here some recent updates to the AP Stylebook:

In April 2018, the book noted that Walmart Inc. had changed its legal name from Wal-Mart Stores Inc.

In May 2018, the Stylebook ruled that "emoji" was the singular and plural form of those little pictures. That same month, the spelling of spicy peppers changed from "chili" and "chilies" to "chile" and "chiles."

The book also added "messenger bag," a bag with a flap. I thought that was a weird entry.

Another weird one was "amaro," and Italian herbal liqueur. Though I guess it makes clear that it's a lowercase a.

In April 2019, the editors ruled that a percent sign would no longer be spelled out. He received a 3% raise. I still dislike that rule.

They also ruled that "casualties" was too vague. It could mean an injury or a death. So, writers should avoid the term.

Also that month, the editors gave their blessing to split infinitives in certain cases.

I might not love all the changes, but I did like this one. As the book said, "Let readability and comprehension be your guide. If splitting a verb results in an awkward sentence, don't do it."

In May 2019, the editors added seven paragraphs to explain "bitcoin," digital currency.

Seven paragraphs later, I remain mystified about what bitcoin is.

In September 2019, the editors added the term "Bosniak" for the ethnic group in Bosnia-Herzegovina. The former term had been "Bosnian Muslims."

Editors in May 2020 got a little racy. They determined that the term "mistress" was outdated. I need to use their words rather than mine here:

Do not use this archaic and sexist term for a woman who is in a long-term sexual relationship with, and is financially supported by, a man who is married to someone else. Instead, use an alternative like companion, friend or lover on first reference and provide additional details later.

Smith, who is married to someone else, was accused of embezzling funds to support his lover.

And the editors revised the spelling of "Voodoo" to "Vodou." Vodou is a religion practiced in Haiti or in Haitian communities in other countries. The Voodoo spelling is considered a derogatory term in those areas.

CORRECTION: An earlier version of this column meant to illustrate split infinitives but instead gave examples of split compound verbs.