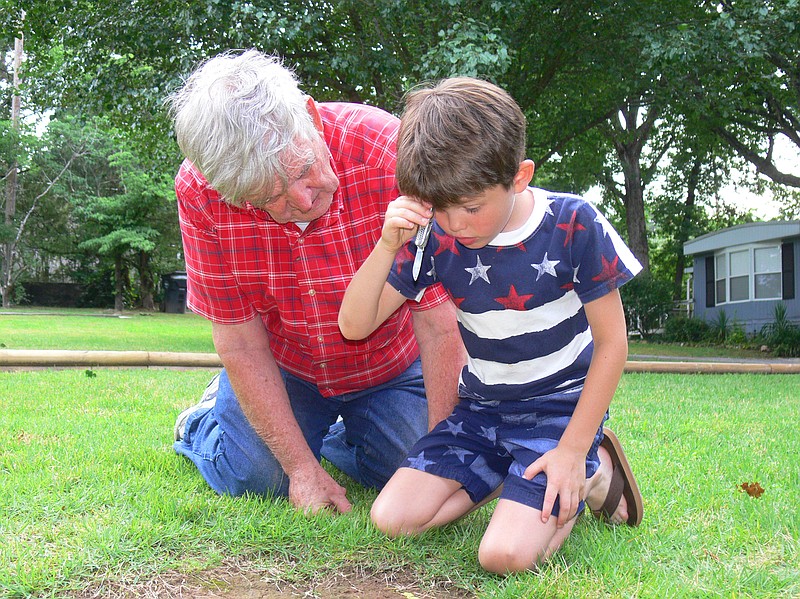 Jerry Butler (left) teaches great-grandson Gavyn White to do a tricky head drop, one of the moves in the old-fashioned game mumbledy-peg. (Special to the Democrat-Gazette/Jerry Butler)

Knives are not welcome in schools today, but when grandparents, their parents and their parents' parents were young, one of their favorite recess pastimes was a knife-flipping game called mumblety-peg.

Mumblety-peg rivaled marbles among boys in popularity and frequency of play two generations ago.

At a time when more boys carried pocket knives to school than not, this game involved tossing a knife in a series of prescribed flips so that the blade would stick into soft, loamy soil with the knife standing upright. The game could also be played with a sharply pointed stick.

The game was demonstrated in an episode of the 1960s NBC series Daniel Boone, a clip of which can be found on YouTube by searching for "mumblety-peg." Here is a shortcut link to another video demonstration, by The Art of Manliness website.

On some occasions, mumblety-peg was played only for bragging rights. Other times, the loser forfeited his knife to the winner. More commonly, however, the winner of the game got to drive a matchstick-sized peg flush to the top of the soil where the game was being played, and the loser had to dig the peg up with his teeth. In those instances, the loser would end up with dirt in his mouth and grit between his teeth.

If the loser was unwilling or unable to pull the peg with his teeth, then the winner would take the loser's knife.

Girls seemed to have better sense than to play mumblety-peg and risk such a disgusting loss.

[RELATED: Granny and Gramps know how to have fun]