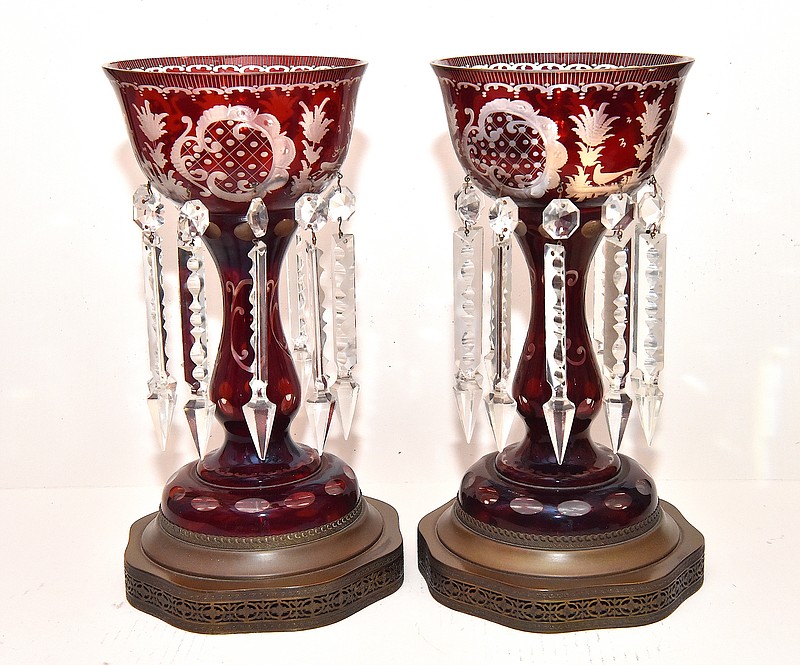 These are household adornments that were used as decorations and lighting on mantels, sideboards and dining tables. (Reader submitted/TNS)

DEAR HELAINE AND JOE: My parents bought these hurricane lamps possibly around 1950. In a note they said they had been made in occupied Germany. Might they have any value in today's marketplace?

DEAR B.S.: We have several problems with this description. The first is the idea that the pieces are "hurricane lamps." They are not.

The pair of objects in today's question are mantel lusters, which are candleholders shaped like vases with pedestal bases -- some say the shape resembles a tulip -- with the bottom of the upper chalicelike portion being adorned with hanging prisms. These are household adornments that were used as decorations and lighting on mantels, sideboards and dining tables.

The word "luster" is sometimes defined as a glow of reflected light, and this does describe what the prisms do on objects such as the ones owned by B.S. Most mantel lusters have one row of prisms, but multiple layers can be found on rare occasions. Two rows of prisms are found from time to time, but examples with as many as five rows of prisms have been reported,

It is our opinion that at least the glass portion of the pair was made in the former Duchy/Kingdom of Bohemia, which after 1918 became part of Czechoslovakia. Everything about the glass vessels shouts Bohemia, from the thin layer of dark red cut through to reveal clear glass underneath, to the birds, foliage and "C" scroll decoration.

Bohemian mantel lusters come in an almost mind-boggling variety of colors and designs. They can be found in green (emerald to apple), red (ruby to cranberry with some pink found every now and then) amber and blue (from turquoise to cobalt and a few shades in between).

But the real variety is in the decoration. Some are intricately painted with portraits and landscapes, while some are cut through multiple layers of differently colored glass. The pair belonging to B.S. is in one of the more common colors and one of the least desirable decorations.

Mantel lusters should always be collected in pairs and singles are often shunned. At auction this pair, which we believe is circa 1930 because of the type of bases they are on, sell at auction in the $200 to $250 range and should be valued for insurance at about twice that figure.

Helaine Fendelman and Joe Rosson have written books on antiques. Do you have an item you'd like to know more about? Contact them at Joe Rosson, 2504 Seymour Ave., Knoxville, TN 37917, or email them at [email protected] If you'd like your question to be considered for their column, please include a focused, high-resolution photo of the subject with your inquiry.