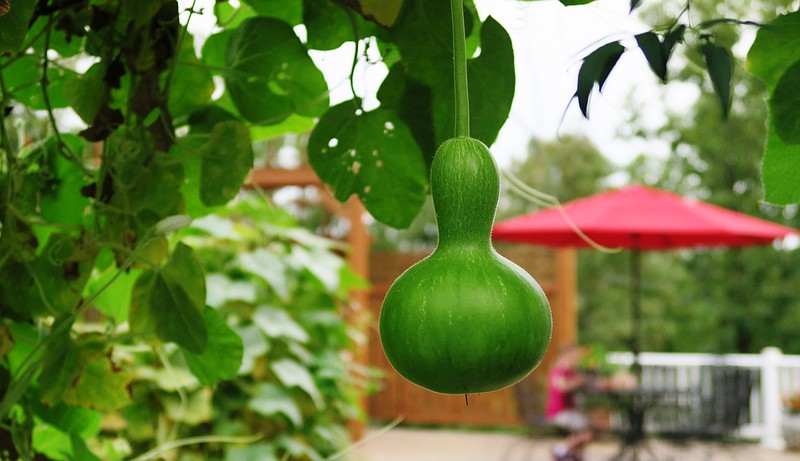 Bottle-shaped gourds have hard shells that can last for years and serve as containers, dippers, birdhouses and other traditional uses. (Special to the Democrat-Gazette/Janet B. Carson)

Fresh vegetables are a given in Arkansas in the summer, in no small part because cucurbits grow well in Arkansas gardens. From cucumbers and squash to watermelons, pumpkins, gourds and cantaloupes, the cucurbit family is full of crowd-pleasers.

There are many members of the family, and they are all tender, warm-season vegetables.

Some, like summer squash and cucumbers, are eaten when their fruits are immature. But melons require a longer growing season and are generally eaten when they are totally mature, thus allowing the flesh to become sweet and the outer rind to grow tough, protecting the watery flesh.

Lastly, you have the winter squash, pumpkins and gourds, which have a hard rind and drier flesh and can store for long periods of time.

All cucurbits can be grown in all parts of Arkansas. Since they are warm-season vegetables, they are usually planted from late April through early June. Most gardeners plant them from seed, but you can find transplants at garden centers.

• Six to eight hours of sunlight at the minimum

• Space in which they can spread out

• Bees or other pollinating insects.

Many gardeners have avoided planting melons and pumpkins because of how much space they need. A standard watermelon, cantaloupe or pumpkin patch can easily be 20 feet across — or more.

If you don't have that much real estate to devote to cucurbits, grow them vertically. Provide a trellis or even a chain-link fence they can climb on. Be prepared to help some cucurbits cling to the trellis — cucumbers are good climbers, but melons and pumpkins are poor climbers on their own. With soft ties to hold the vines to the trellis, they can easily be trained to grow upward.

Depending on the size of the mature fruit, you might need to provide more support for the weight of large, mature cantaloupes, melons or pumpkins — strips of cloth, old pantyhose or more ingenious methods have been used. This added support keeps the fruit attached to the vine without dragging the vine off the trellis.

All cucurbits are similar in their growth habit and appearance. With the exception of summer squash, most are vining plants with tendrils and have large, lobed leaves.

All cucurbits have yellow blooms, except for some of the gourds, which may have a white bloom.

All cucurbits have separate male and female blooms on the same plant, and they require insects to pollinate them. Poor pollination can result in small or misshapen fruit. The blooms look the same at first glance, but the male blooms (which often appear first on the plants) simply have a stalk behind the bloom, with pollen on the inside of the flower. After the flower drops, the stem it leaves can look as though it was snipped off using scissors.

The female bloom will have a small fruit behind the flower, which is actually the ovary. The small fruit will fall off if it does not get pollinated but will enlarge and continue to grow if good pollination has occurred.

Flowers usually open shortly after sunrise. Female flowers are receptive to pollen throughout the day, although most pollination takes place before noon, especially when temperatures are high. Each flower closes in the afternoon never to reopen, regardless of whether it was pollinated or not.

Rainy and windy weather reduces bee activity, which can cause poor production due to inadequate pollination.

Know the length of the growing season for the cucurbits you plant.

Summer squash and cucumbers can be harvested within 40-50 days from seed, while most melons take twice that time for maturity of fruit, 80-90 days. Winter squash, pumpkins and gourds have even longer seasons, with 100 to 120 days from planting until harvesting.

Read your seed packet and it will tell you how many days from seeding to harvesting is needed. You can definitely shorten the time from planting to harvest if you use transplants instead of seed.

Gallery: Champing at the cucurbit

Fertilize cucurbits lightly at planting and then side-dress when the vines begin to run. Another light application of fertilizer can be applied after fruit is set. Don't over-fertilize, as too much fertility will give you excessive vines and less fruit and can lower the quality of the fruit.

Moisture is most critical during planting and fruit set. Extremes in moisture (too much rain or extended drought) can cause cucurbits to suffer, especially in heavy soils. Drip irrigation works the best, keeping the foliage dry. If you only have overhead irrigation, make sure you finish watering early enough in the day so the foliage can dry before the sun sets. Wet foliage overnight leads to diseases.

Summer squash plants are bush-like instead of vining. Too much moisture trapped under the foliage can cause fruit rot.

Melons prefer adequate water during fruit set and development, but the fruit will be sweeter if conditions are dry during the last week or two of development. In a typical Arkansas summer, by late June and July, gardeners often have to supplement natural rainfall. Two to three weeks prior to harvesting, start cutting back how much water you give your melon plants.

Plants may wilt some in the afternoon, but as long as they recover in the evening, they have enough moisture to continue production.

Too much rain or watering can result in bland fruits or melons that split open. Drier conditions concentrate the sugars, leading to sweeter fruit.

Learn something about what type of cucurbit you are growing and the signs to look for as harvest time approaches.

Most summer squash and zucchini are harvested when they are 4-7 inches long. They are usually ready to harvest 4-8 days after flowering.

Recognizing a ripe melon requires a bit of expertise.

• Watermelons usually lose their shiny appearance and are dull, with a yellow or white bottom. The curly tendril near the stem attachment turns brown.

• Cantaloupe and honeydew will usually separate from their stems easily when they are ripe and the rind will have a distinct aroma.

• Winter squash and pumpkins can stay in the field the longest, and they should develop even color, a hard rind and a tough stem.

Shelf life of the various cucurbits varies too, with the summer squash and cucumbers needing to be used within a few days while winter squash can last for months in cool storage. Most melons will store at room temperature for a week or two if refrigerated and uncut. Summer squash and cucumbers can be eaten raw or cooked, while most melons are eaten raw, and most winter squashes and pumpkins are cooked.

The cucurbit family is an important family with a wide range of tasty vegetables as the end product. Try growing some in your own backyard. 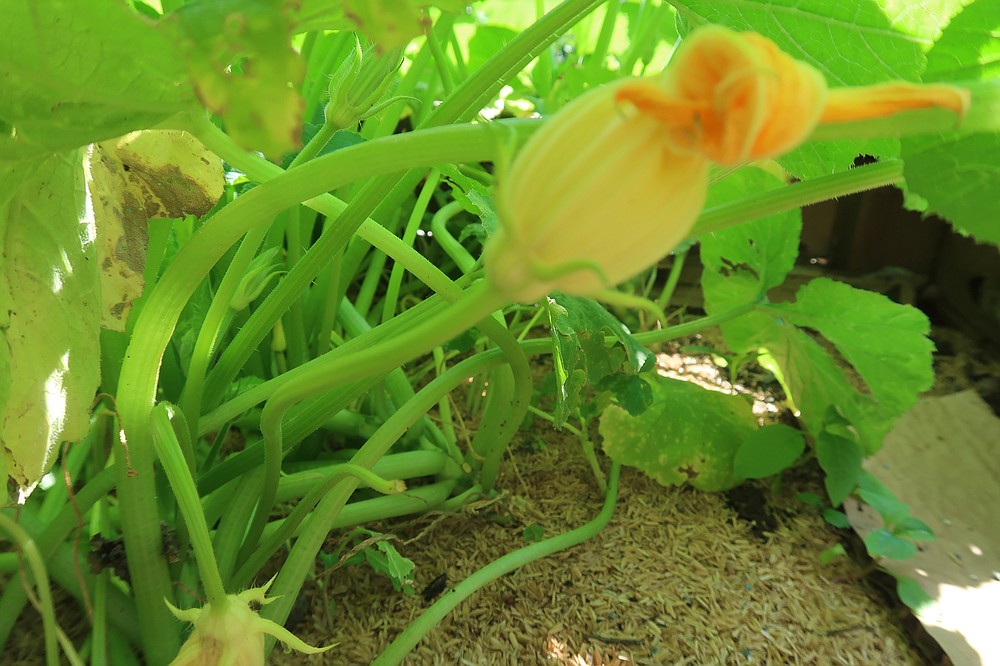 This male Cucurbit flower will drop off leaving nothing behind but the end of the stem. (Special to the Democrat-Gazette/Janet B. Carson) 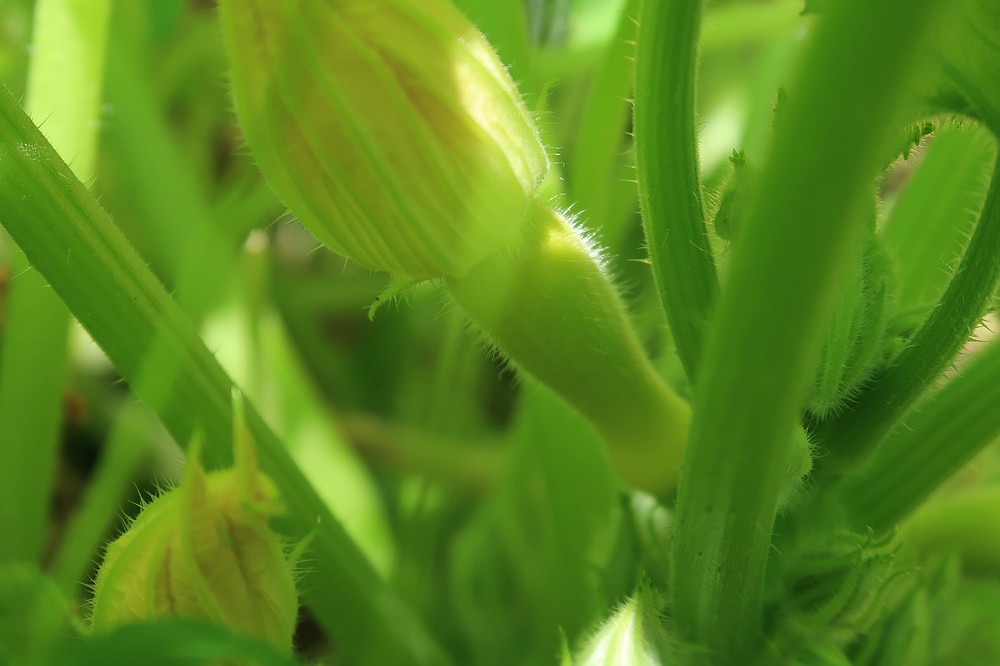 This female Cucurbit flower has a little fruit attached. (Special to the Democrat-Gazette/Janet B. Carson) 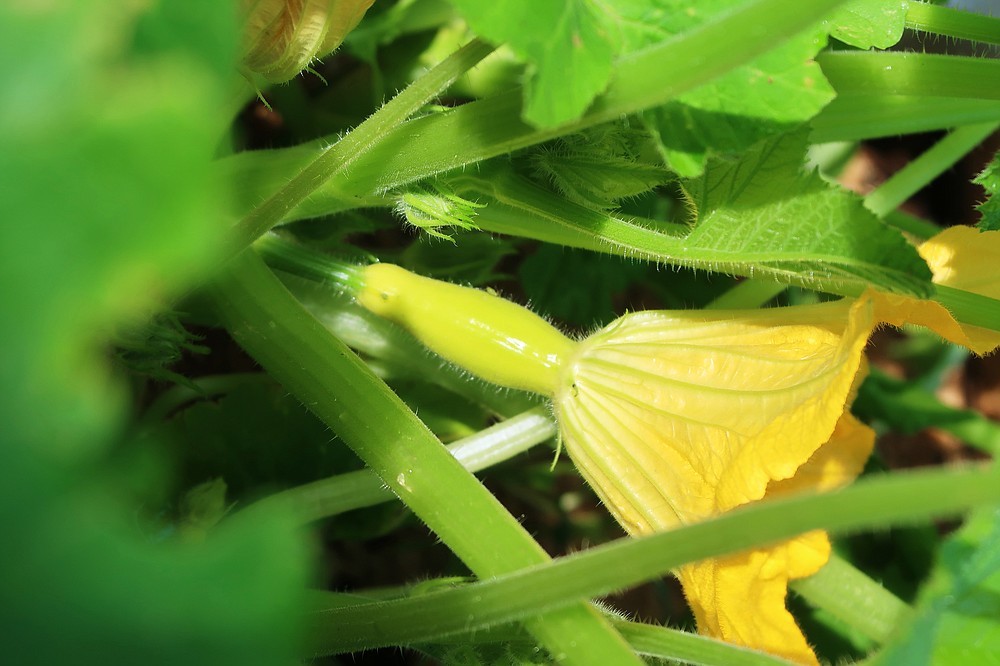 A female squash flower has a little fruit ready to go, but the fruit will drop off if the flower isn't pollinated that very day. (Special to the Democrat-Gazette/Janet B. Carson) 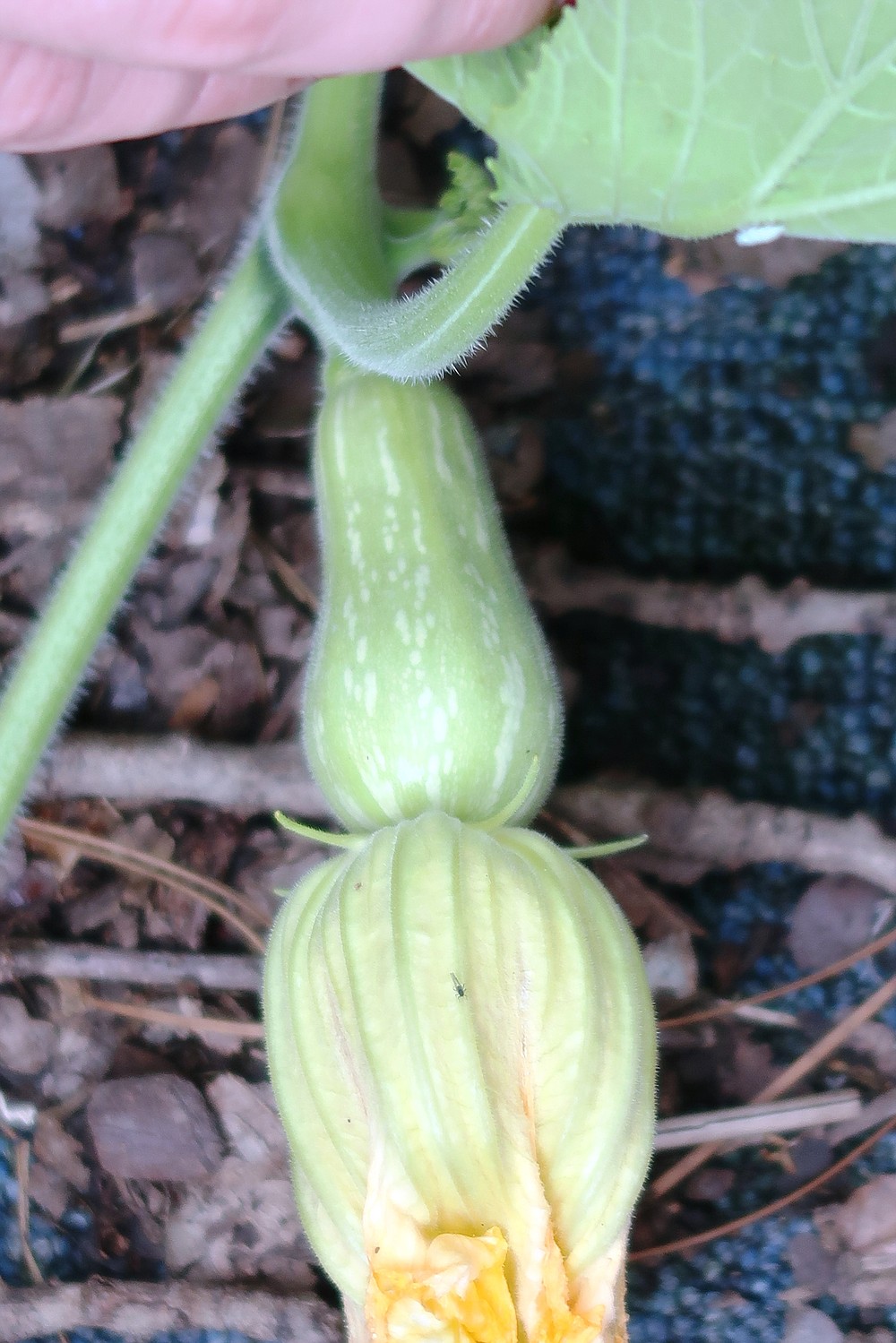 A female butternut squash flower has the fruit behind it from the outset. (Special to the Democrat-Gazette/Janet B. Carson) 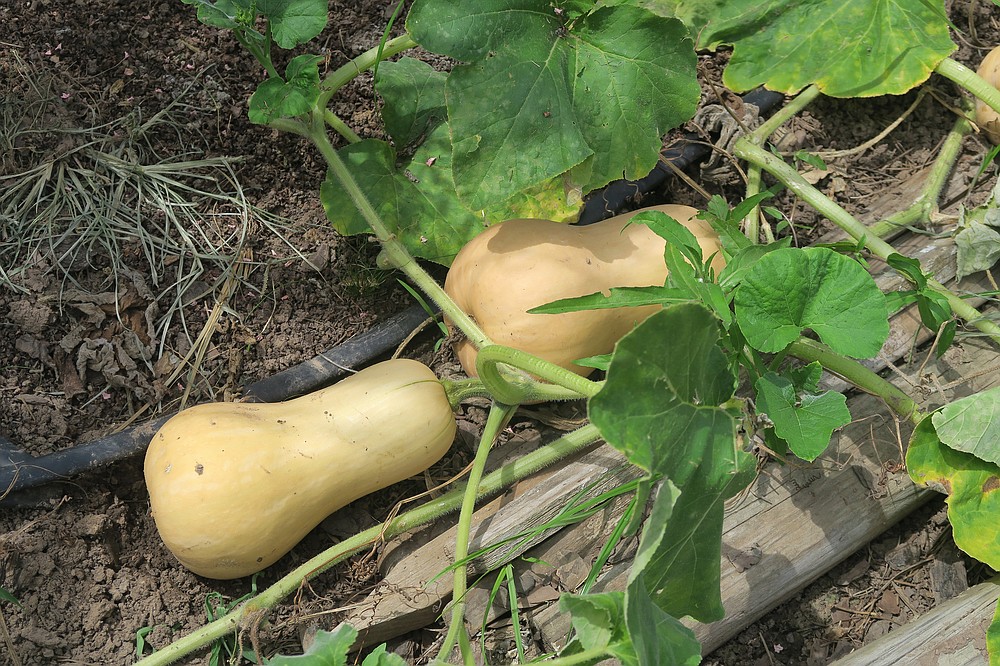 Butternut squash can take 110-120 days to reach maturity. (Special to the Democrat-Gazette/Janet B. Carson) 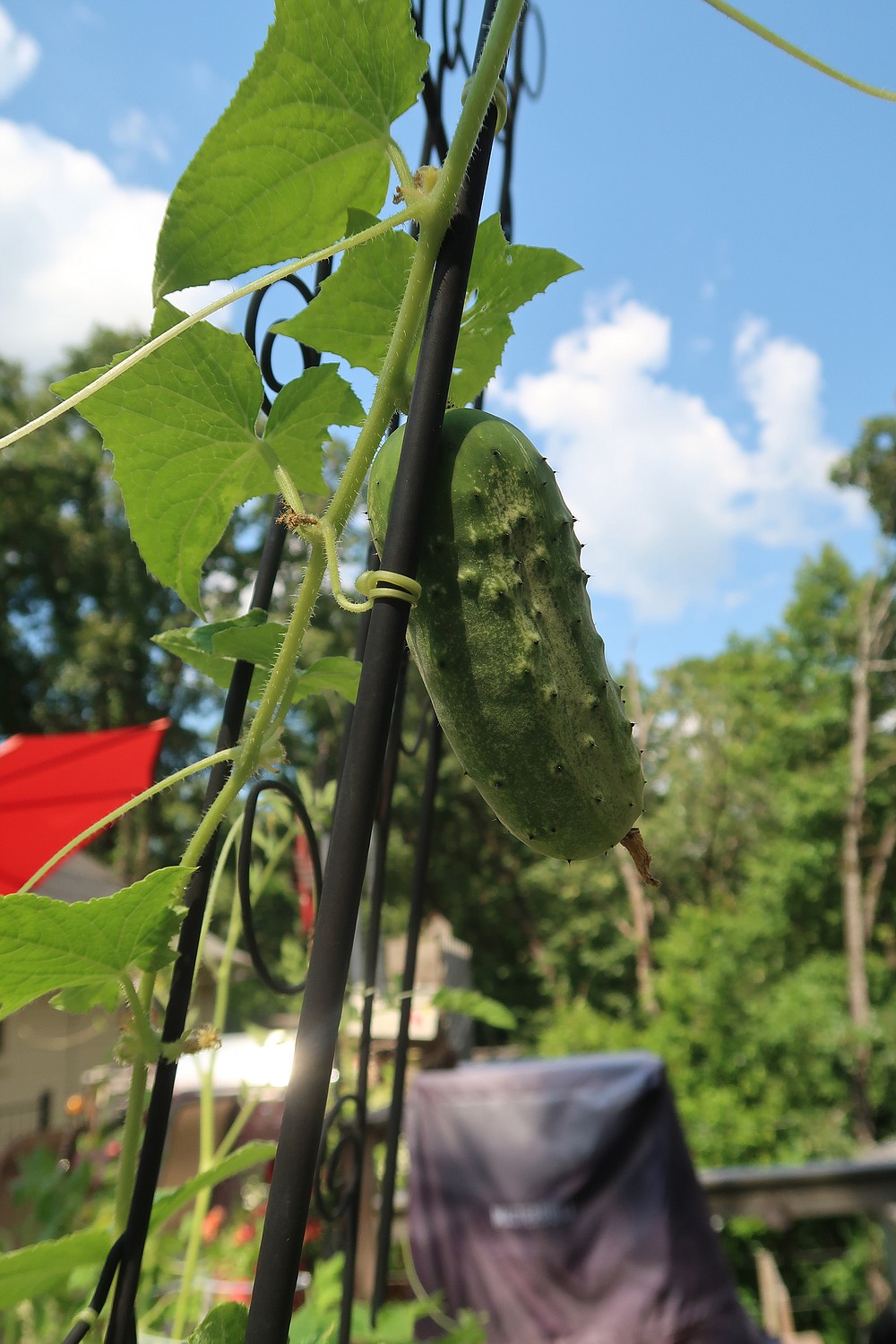 Cucumber vines are good at clinging to a trellis. (Special to the Democrat-Gazette/Janet B. Carson) 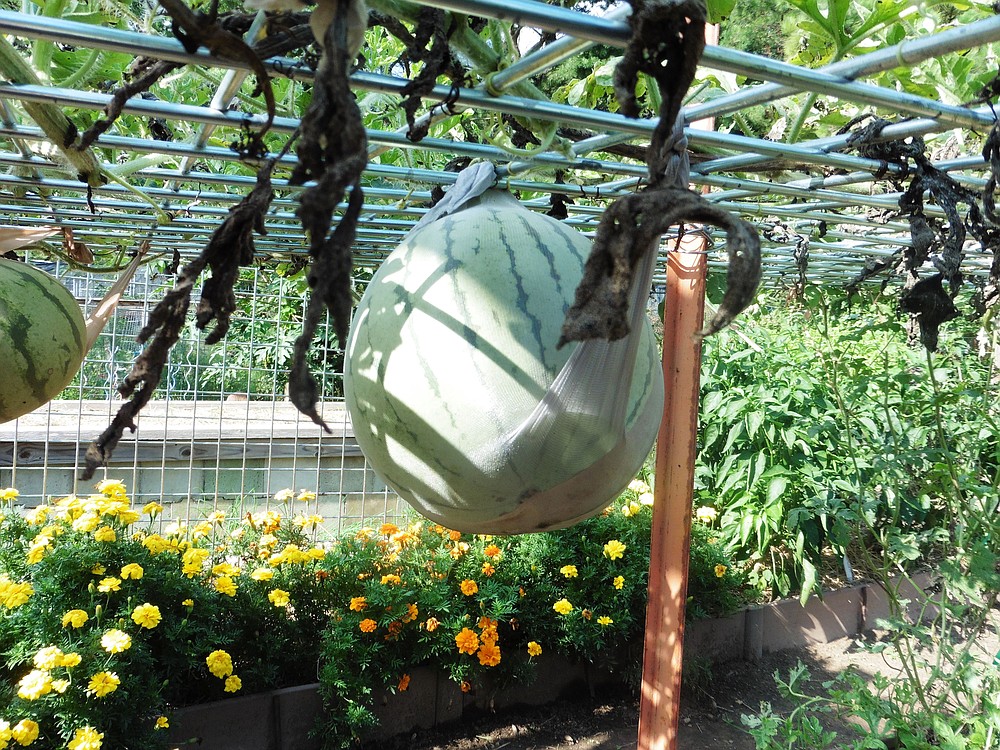 Watermelons can be grown on a trellis if the heavy fruits are well supported. (Special to the Democrat-Gazette/Janet B. Carson)

All Cucurbits have male and female flowers.\