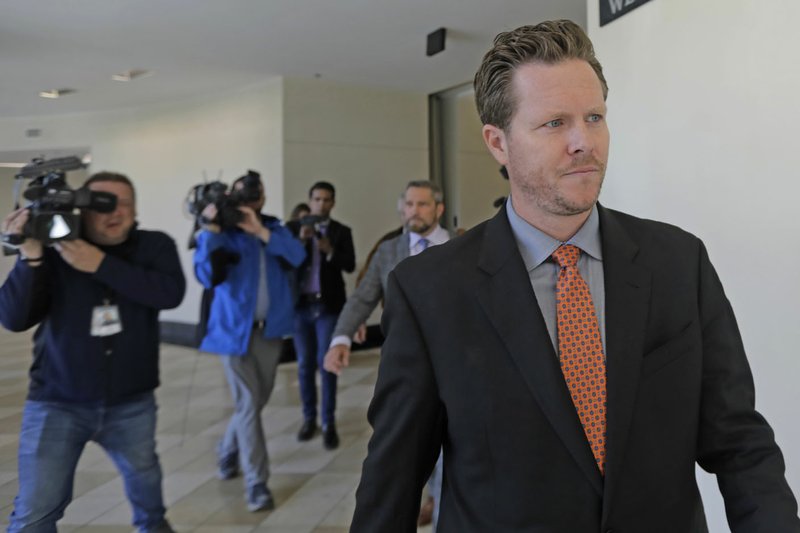 AP file photo Paul Petersen, Maricopa County assessor, leaves court Nov. 15 in Salt Lake City. He resigned from his elected position on Tuesday, months after being charged with running a human smuggling operation that paid pregnant women from the Marshall Islands to give up their babies in the U.S.

Paul Petersen, 45, pleaded guilty to related state charges in Arizona on Thursday. He was charged in Arizona and Utah state courts and indicted in federal court in Arkansas, all in October.

"Nothing's final until it's final, but we're confident that it's going to take place," Altman said.

Federal authorities in Arkansas had no comment Thursday. The U.S. District Court docket in Fayetteville showed no new hearings scheduled in the case.

The federal indictment accuses Petersen of paying pregnant women from the Marshall Islands, a small nation in the western Pacific, to give up their children for adoption. He paid their airfare to the United States for that purpose and gave them airfare home, all in violation of a specific clause in a treaty with the islands' government, his indictment says.

In all, Petersen faced 19 federal counts, 32 felony charges in Arizona and 11 illegal adoption counts in Utah.

As many as a dozen pregnant women near delivery stayed in one Springdale home at a time, according to the indictment. A birth mother must be an Arkansas resident for at least four months before giving up a baby for adoption, but some of the mothers in the Arkansas adoption cases lived in Oklahoma and others had arrived a matter of weeks before birth and adoption, according to the indictment and testimony in a related civil case.

The federal investigation started in 2016 after local bar associations in Northwest Arkansas complained to federal authorities, according to Duane "Dak" Kees, U.S. attorney for the western district of Arkansas at the time of Petersen's indictment. Kees estimated Petersen's office in Fayetteville arranged for about 30 adoptions a year. His usual terms with adoptive parents required $25,000 up front with another $10,000 once the adoption was finalized, according to court documents.

Takehisa is named in four of the 19 counts in the indictment. Her case is still shown as pending in federal court records.

Petersen pleaded guilty in state court in Phoenix on Thursday to fraud charges for submitting false applications to the Arizona Medicaid system for birth mothers to receive state-funded health coverage. Only permanent Arizona residents are eligible for such coverage under that state's laws. Arizona was defrauded of $814,000 in benefits by the scheme, according to the charges filed against him.

Arrests in the case put pending adoptions in three states in legal limbo.

In Arkansas, 13 adoptive couples filed suit in Washington County after their planned adoptions were held up by Petersen's arrest. At least 19 pregnant women brought by Petersen's firm were in Arkansas and Oklahoma at the time, according to court testimony in the lawsuit.

The court consolidated all of Petersen's pending adoptions in Arkansas and then sealed the records, as is normally the case in family matters.

Petersen was the Maricopa County, Ariz., assessor for six years until his resignation in January, which came after the county's board of governors suspended him after his arrest.

He faces a maximum of nearly 17 years in prison for his guilty pleas on Arizona charges of fraudulent schemes and forgery. He also agreed to pay $650,000 to the state's Medicaid system.

He still faces human smuggling charges in Utah and Arkansas. Altman said Petersen is scheduled to enter guilty pleas on Friday in Utah.

Court documents in Utah say the pregnant women who went to Utah to give birth received little or no prenatal care. They also said Petersen and his associates took passports from the pregnant women while they were in the U.S. to assert more control over them, according to the federal indictment.

Peterson in his youth served as a missionary in the Marshall Islands, an island nation about 2,000 miles west of Hawaii. Arkansas has the largest Marshallese population in the continental United States. Petersen's law firm opened an office in Fayetteville in 2014.

The Marshall Islands are a former territory of the United States. Islanders from there are allowed to travel to the United States under a treaty, but the treaty also includes a clause forbidding travel specifically for the purpose of giving up a child for adoption.

No sentencing date has been set yet for Petersen in Arizona.