Fayetteville goes ahead with tailored response to pandemic, state says no interference 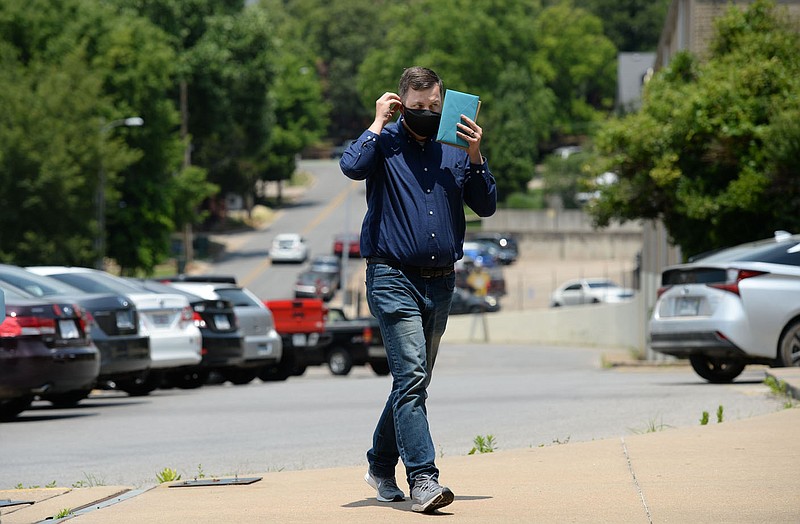 Justin Peek of Fayetteville dons a cloth mask Wednesday before entering the post office on Dickson Street in Fayetteville. The City Council made it mandatory to wear masks in the public portion of all business with a few exceptions. Go to nwaonline.com/200618Daily/ for today's photo gallery. (NWA Democrat-Gazette/Andy Shupe)

FAYETTEVILLE -- State officials say they would prefer coordination over cities taking their own action that could conflict with directives and guidance set forth during the pandemic.

On Tuesday, the City Council voted unanimously to require wearing face masks in most indoor public places. An emergency clause was attached to the measure, making it effective immediately.

Gov. Asa Hutchinson during his Wednesday news conference said he understood where the council's heart was in trying to stop the spread of covid-19. However, there exists some conflict between the ordinance and state orders, he said.

At the same time, Hutchinson said he anticipates no legal action on the part of the state for now.

"I know the intent of it, and I know they've got a growing number of cases. I don't intend to interfere with that," he said. "If it becomes more of a problem across the state with different instances of municipalities taking action, we'll re-examine that."

"Attorney General Rutledge urges local officials to consult with the governor, the Health Department and her office before taking independent actions that may be in conflict with state law, directive or executive order during this statewide health emergency," she said.

The ordinance requires anyone in the public portion of a business to wear a face covering. Exceptions are made for when people are eating, drinking or exercising, or in small group settings in which a distance of 6 feet can be achieved. It doesn't apply to outdoor settings unless social distancing isn't possible. People with a relevant disabling condition also are exempted.

The measure allocates $100,000 from the city's emergency fund to put toward a public safety campaign. The money will be used to buy masks to hand out to businesses for distribution. That way, customers entering a store without a mask could get one. Businesses could also charge customers a small fee if they buy their own masks.

The council in March dedicated $3 million from the emergency fund to put toward pandemic-related efforts if necessary. Including the $100,000, about $250,000 has been committed, Chief Financial Officer Paul Becker said. Commitments include personal protective equipment and overtime for public safety personnel.

State directives already say people in bars and restaurants must wear a mask until food or drink is served. Clients at salons, barbershops and tattoo parlors must also wear a mask as services permit. Mask-wearing is encouraged, not mandated, at retail shops, grocery stores and gyms.

Council member Matthew Petty, who sponsored the ordinance, said he heard an invitation from Hutchinson to have a conversation about regional and local responses to outbreaks during the pandemic. The council took action based on what it saw with a surge in cases in Northwest Arkansas, he said.

"We didn't do this because we had a silly notion," Petty said. "We're in the middle of an outbreak and people are dying increasingly."

Nine more people have died in the state, bringing the toll to 197. The state recorded 415 new cases Wednesday with 4,413 active cases. Washington County had the highest number of new cases reported at 90, with Benton County following close behind at 81.

Billie Kupczynski, employee at Big Al's Pawn Shop on South School Avenue, said requiring customers to wear masks might result in some lost revenue, but there are bigger concerns right now. Requiring masks may not be enough, she said.

"I'm all for trying to get this to die down, where more people will stop being sick, and we get rid of this eventually," Kupczynski said.

The shop put up a sign notifying customers to wear a mask Wednesday. Most seemed OK with it, Kupczynski said. Some walked out and didn't come back. Others went to their car and came back with a covering over their face, she said.

Kupczynski said she heard the news of the council's overnight decision Wednesday morning.

"I was like wow, that was quick," she said. "Why can't they decide that fast on anything else?"

Kirby Johnson, owner of Johnson Hardware on Leverett Avenue, said he'll be convinced of the effectiveness of masks to prevent the spread of a virus when he sees a formal study saying as much.

"My feeling is this is just people being reactive," he said. "It gives somebody a warm, fuzzy feeling to see other people in a mask, and rather than fight it, let's mandate it."

The Centers for Disease Control and Prevention recommendations say people should wear cloth face coverings in public settings where other social distancing measures are difficult to maintain, such as grocery stores or pharmacies. This is especially true in areas of significant community-based transmission, according to the guidelines.

Johnson said he wants to see the evidence showing the effectiveness a simple mask has in preventing the spread of covid-19. He said he's researched the topic but has only found stories that amount to conjecture and public officials trying to placate people.

"If they could come up with some solid, scientific data -- not conjecture -- that proved it, I would wear one," Johnson said. "But, up until that point, I'm not going to."

Johnson said he doesn't plan to make his employees and customers wear a mask and is ready to hire a lawyer if it becomes necessary.

City Attorney Kit Williams said the main difference between the ordinance and state directives appears to be requiring the wearing of masks inside stores and shops. It wouldn't apply to churches, he said.

The ordinance includes no penalty for residents who go maskless, aside from being denied entry to a store. Business owners could only be penalized for "willful neglect" of the ordinance. The standard penalty for violating an ordinance is a citation and up to a $500 fine, with continual violation at $250 per day.

Williams said the term "willful neglect" mostly serves as guidance to law enforcement and the city prosecutor, if a case ever got to that point.

"This particular standard is going to be virtually impossible to prosecute unless somebody just fesses up," he said. "How do you prove willful neglect?"

Petty said the focus of the ordinance isn't punishment, but education and outreach. That's why the council attached $100,000 toward the public safety campaign, he said. Aside from buying masks, the administration will coordinate those efforts. Actions may include setting up informational tables with staff where people tend to interact, online outreach and setting up a phone number for businesses to call with any pandemic-related concerns.

Residents who go to businesses and see clusters of people not wearing masks could call the city's non-emergency number to complain. Punishment would be used as a last resort, like other city ordinances, Petty said.

"We are not going to be sending around officials to verify what businesses are doing," he said. "We're not creating an inventory and going down the list to check on everybody. And we're definitely not going to be targeting individuals."

Williams advised the council the ordinance likely oversteps the city's authority to regulate commerce during the pandemic. Mark Hayes, executive director of the Arkansas Municipal League, agreed. State law says the Health Department and Governor's Office have total regulatory authority in a declared emergency, he said.

The fact the council passed an ordinance its attorney advised was an overstep, and how the governor acknowledged that overstep but declined to take any action on it, shows how unprecedented these times are during the pandemic, Hayes said. The more likely legal action would come from a resident or a business owner, he said.

"I hope calmer heads prevail. I get it. I love the idea of protecting people when I wear a mask and they do the same for me," Hayes said. "I get the concern from a health perspective. I just don't think it washes, legally, in light of the governor and Department of Health's proclamations."

The city set up a pledge form online for businesses to fill out saying they will adhere to all executive orders and directives from the Governor's Office and Health Department. The list will be made available to the public, and the businesses will be able to advertise their elective membership to the campaign.

The #KeepRogersSafe campaign is designed as an opt-in, good actor program, Hines said. Businesses will be able to show customers they are following mandated health directives, as well as their indication to follow guidelines, such as wearing face masks, where they aren't mandated, he said. The text of the pledge doesn't make a distinction between guidelines and mandates.

The move, in turn, lets customers know businesses are concerned about their health, Hines said.

"I think it's the appropriate way for government to respond to this, where we don't have the authority to pass regulations that mandate businesses do certain things," he said. "We're just hoping the business community recognizes that the vast majority of the consumers are looking for a place to shop safely."

• Except when eating, drinking or exercising.

• Except in small group settings where social distancing can be followed.

• Except for people with a relevant disabling condition.

• Not applicable outdoors generally, except for events where the format or attendance prevents social distancing.

3) Businesses must distribute masks for free or a small fee.

• Free masks for businesses to redistribute.

6) Practically no penalty on individuals, except no access to business without a mask. Masks will be distributed to anyone who lacks one.

7) No penalty for businesses, except for willful neglect.

• Masks will be required in a mechanic’s customer service area, but not in the workshop.

• Masks will be required in a corporate lobby, but generally not employee-only areas.

• Masks will be required in all public-facing areas in a retail setting, such as a grocery or hardware store.