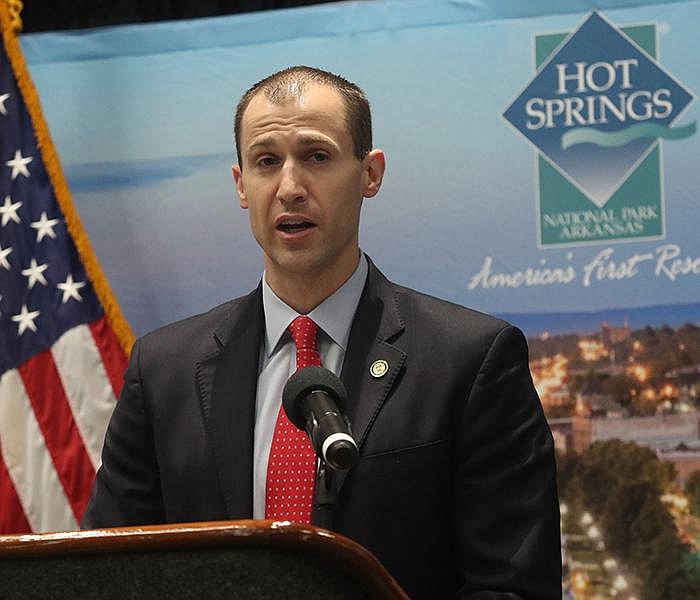 State Commerce Secretary Mike Preston said Tuesday at the coro- navirus briefing in Hot Springs that the number of Arkansans receiving unemployment benefits had fallen over the past four weeks, from a high of 122,000 to 106,000. (The Sentinel-Record/Richard Rasmussen) - Photo by Richard Rasmussen

Arkansas' count of coronavirus cases rose Tuesday by 274, including the smallest one-day increase since June 10 in cases among Arkansans who are not prison inmates.

The state's death toll from the virus, as tracked by the Arkansas Department of Health, rose by six, to 188, while the number of patients hospitalized with covid-19 increased by eight, reaching a new high of 214.

Forty-eight of the patients were on ventilators, up from 45 a day earlier.

Meanwhile, Commerce Secretary Mike Preston announced that, starting June 28, Arkansans receiving unemployment benefits will once again be required to certify that they are looking for work.

He said the number of Arkansans receiving unemployment had fallen over the past four weeks, from a high of 122,000 to 106,000.

In addition, about 32,000 Arkansans are receiving assistance through a federal program for gig economy workers, independent contractors and the self-employed.

"So those numbers around the state, while certainly are still much higher than we've ever seen as a state," are "moving in the right direction," Preston said.

At the state's East Arkansas Regional Unit near Brickeys in Lee County, the number of coronavirus cases among inmates, as tracked in Health Department reports, increased by 217, to 475.

In addition, Department of Corrections spokeswoman Cindy Murphy said 16 male inmates at the Wrightsville Unit have tested positive, making it the fifth Division of Correction prison where infections have been confirmed among multiple inmates.

Just one coronavirus case that was added to the state total on Tuesday was from a prison inmate, however. Such cases often show up in the state's overall count several days after a test is performed, after information from laboratory reports is entered into a state database.

A Health Department report also showed that infections had been confirmed for the first time among residents of one of the state's five institutions for the developmentally disabled.

The Department of Human Services had been planning to conduct testing at the center as part of the state's plan to test all residents and workers of long-term care facilities in the state this month, Webb said.

The Conway center's testing was moved up after an employee tested positive, she said.

All 480 residents and 1,000 staff members at the center have been tested, she said. The department is still waiting on the results of about 100 of the tests.

"We are isolating those who are positive away from others," she said, adding that "employees are out until they are cleared."

She noted that visitors have been banned from the human development centers in response to the pandemic, and employees are screened for fever and other symptoms.

One worker at the center in Jonesboro and two at the one in Arkadelphia tested positive earlier, according to Health Department reports.

Tuesday's increase in the statewide tally followed five days in which it grew by more than 400 each day, including a record 731 cases that were added Friday.

The 273 non-inmate cases that were added to the statewide tally Tuesday were the lowest one-day increase in such cases since June 10, when 228 such cases were added.

The average number of cases added to the state's total over a rolling seven-day period fell from 454 as of Monday to 444.

Among just the non-inmate cases, the average number added each day over seven days fell from 375 to 370.

"I said that we could be in the 400-a-day range for the coming week, so we'll see," Gov. Asa Hutchinson said Tuesday. "Hopefully we'll beat that, but you can see that today's numbers were better."

Increases were in the single digits in all other counties where the case totals rose.

More than a fourth of the state's 4,338 active cases, in which a person has tested positive and has not yet recovered, were in Washington County, which had 1,097.

Benton County had the next-highest number of such cases, 585, followed by Lee County with 513 and Pulaski County with 308. 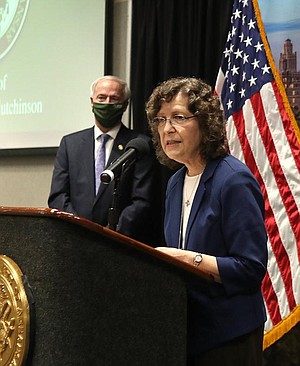 Photo by Richard Rasmussen
State epidemiologist Jennifer Dillaha noted Tuesday that people age 65 and older account for 70% of those who have died in Arkansas because of the coronavirus. “Many cases have been in long term care facilities, and that’s why it’s very important for us to protect those who live in nursing homes, assisted living and other types of facilities,” she said. (The Sentinel-Record/Richard Rasmussen)

According to a chart that Hutchinson displayed at his near-daily news conference on the pandemic, held Tuesday in Hot Springs, 75 of the patients hospitalized with covid-19 were in the Health Department's northwest public health region, which encompasses 19 counties.

That was down from a high of 84 patients in the region who were hospitalized as of Thursday.

The central region, made up of seven counties, had 43 hospitalized patients on Tuesday, down from a high of 45 on June 4.

There was no explanation for why the numbers on the chart didn't match the Health Department's total for hospitalizations.

Hutchinson said he hopes to present a plan and timeline today for reopening the state's nursing homes and other long-term care facilities to visitors.

A Health Department directive on March 13 barred visits to such facilities "unless medically necessary or by law enforcement or other emergency personnel" or by staff from certain state and federal agencies.

Medically necessary visits include "visitation related to medical treatment and visitation appropriate for a resident's end of life care."

The state's effort to test all residents and employees of nursing homes and other long-term care facilities this month has been described as a step toward lifting the ban on visitors.

Testing has been completed at 150 of the 400 facilities scheduled for testing, Hutchinson said.

"That's an amazing statistic, and it tells you that we are protecting our most vulnerable citizens, and that [we] hopefully will be in a position down the road that they can have visitors again," he said.

State epidemiologist Jennifer Dillaha noted that people age 65 and older made up 11.5% of Arkansans who had tested positive as of Tuesday but 71%, or 134, of those who have died.

"Many cases have been in long-term care facilities, and that's why it's very important for us to protect those who live in nursing homes, assisted living and other types of facilities," she said.

The number of residents of such facilities who have died from the virus, as tracked in Health Department reports, increased on Tuesday from 70 to 72.

"If we're going to open up our nursing homes so that people can have that loving contact with their loved one who's in the nursing home, then it's going to be really important for us all to do our jobs in the community to reduce the spread of covid-19 so it cannot enter the long-term care facilities," Dillaha said.

The deaths added to the state's total, as tracked by the Health Department, on Tuesday marked the 43rd in Pulaski County, the 13th in Washington County, the 10th in Crittenden County, the third in St. Francis County, the second in Miller County and the first in Nevada County.

Charles Martin, 62 of Warren, in Bradley County, died Monday evening in the intensive care unit at CHI St. Vincent Infirmary in Little Rock after testing positive for covid-19, according to a Pulaski County coroner's report.

Martin was admitted to the hospital on June 4 and tested positive for the virus. He had a history of chronic obstructive pulmonary disease, hypertension and coronary artery disease, according to the report.

Including those who have died, the number of nursing home and assisted living facility residents who have tested positive increased by 16, to 600.

Among workers at the facilities, the number of confirmed infections increased by 12, to 357.

The number of facilities with at least one resident or worker who has tested positive increased by two, to 107.

Information for this article was contributed by John Moritz, Jeannie Roberts and Eric Besson of the Arkansas Democrat-Gazette.