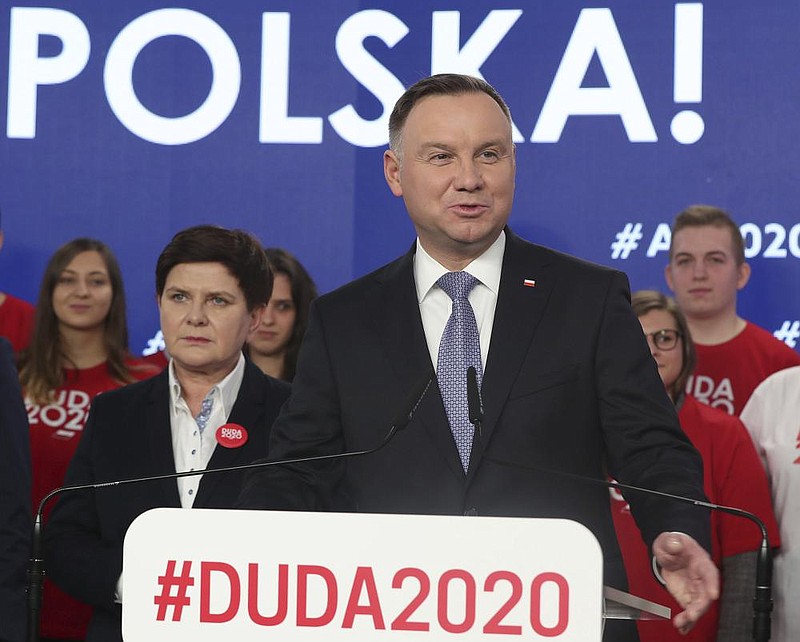 WARSAW, Poland -- Polish President Andrzej Duda accused the LGBT rights movement Saturday of promoting a viewpoint more harmful than communism and said he agreed with another conservative politician who stated that "LGBT is not people, it's an ideology."

Duda made his comments in the small southwestern town of Brzeg as he campaigns for reelection in Poland, a predominantly Catholic nation that spent more than four decades under communist governments.

Gay rights is emerging as a key campaign theme in the presidential election as the race grows close between Duda, backed by the nationalist conservative ruling party, and Warsaw Mayor Rafal Trzaskowski, who has called for tolerance for gays and lesbians.

Duda, who is 48, told his supporters that his parents' generation did not struggle to cast off communism only to now accept "an ideology" that he thinks "is even more destructive to the human being."

The president said that during Poland's communist era, regimes ensured survival by indoctrinating the youngest generation.

"That was Bolshevism. It was the ideologizing of children," he said. "Today, there are also attempts to push an ideology on us and our children, but different. It's totally new, but it is also neo-Bolshevism."

Earlier in the week, Duda signed a declaration drafted for the stated purpose of helping families that included language on "protecting children from LGBT ideology" with a ban on "propagating LGBT ideology in public institutions."

Many conservative politicians in Poland say they are not against gay men and lesbians as individuals, but oppose the goals of a civil rights movement they claim is imported from abroad and threatens to sexualize young people.

But gay and lesbian Poles and liberal Poles say government officials are adopting a language of dehumanization. They believe Duda and others are targeting gay people to curry favor with the Catholic church and shore up support among conservative voters ahead of the election.

Some analysts also suspect that Duda and the governing Law and Justice party are making a bid for far-right voters who will mostly support the candidate of a smaller party, Confederation, in the election's first round but whose votes will be up for grabs in a runoff.

The election is scheduled for June 28, with a second round featuring the two top candidates two weeks later on July 12 if none of the contenders wins at least 50% outright. While there are now 10 candidates in the race, polls predict a runoff between Duda and Trzaskowski, who belongs to the centrist and pro-European Union Civic Platform party.

In recent days, a string of prominent conservative politicians have spoken out about "LGBT ideology." The deputy head of the governing party, Joachim Brudzinski, wrote Thursday on Twitter that "Poland without LGBT is most beautiful." His tweet included an image of Jesus and eggs in a bird nest -- a bird family "realizing God's plan," he said.

Asked about the tweet at a Friday rally, presidential challenger Trzaskowski said: "If you use the words 'Poland without someone' -- and it doesn't matter who -- that is dividing Poles, and we have had enough of dividing Poles."

"I think anyone who uses this kind of language will pay a political price," Trzaskowski said.

Another conservative lawmaker got kicked off the air in the middle of a Friday interview with private broadcaster TVN for saying "LGBT is not people, it's an ideology."

Duda said at the rally that he agreed with that idea.

"They are trying to convince us that they are people, but this is an ideology," Duda said to applause and chants of "Andrzej Duda!" 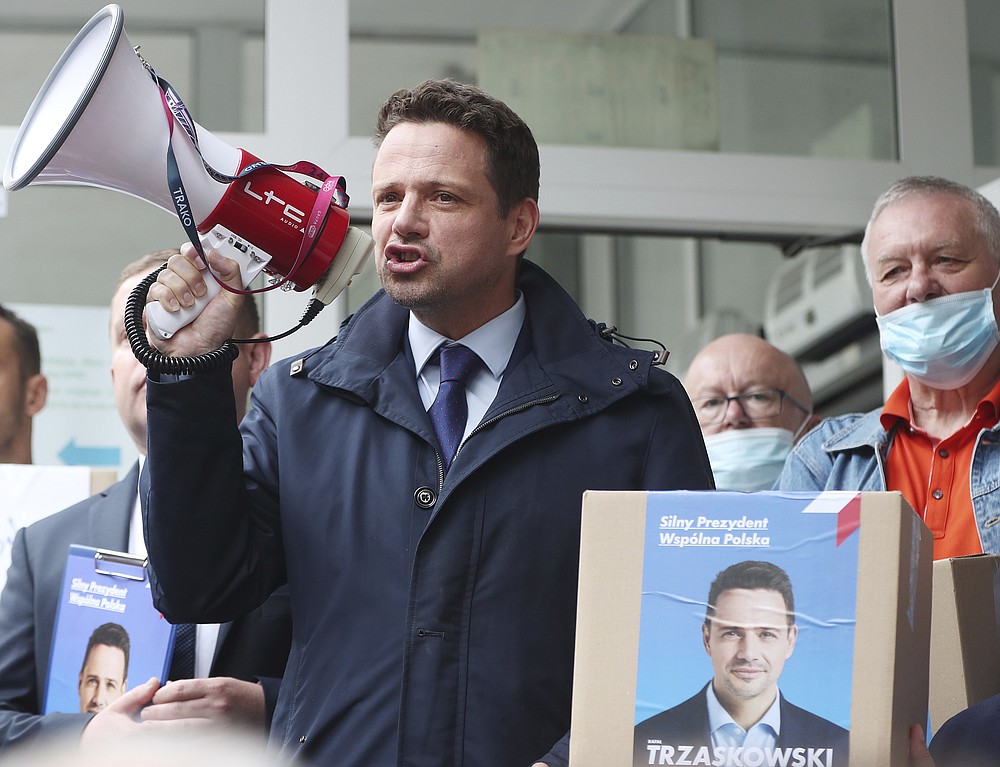 Centrist opposition presidential candidate, Warsaw Mayor Rafal Trzaskowski, addresses supporters as he deliver signatures for his presidential candidacy to Poland's state electoral commission in Warsaw, Poland, Tuesday, June 9, 2020. Trzaskowski, with the pro-EU Civic Platform party, had under a week to collect 100,000 signatures to formalize his candidacy, but managed to get 1.6 million. (AP Photo/Czarek Sokolowski) 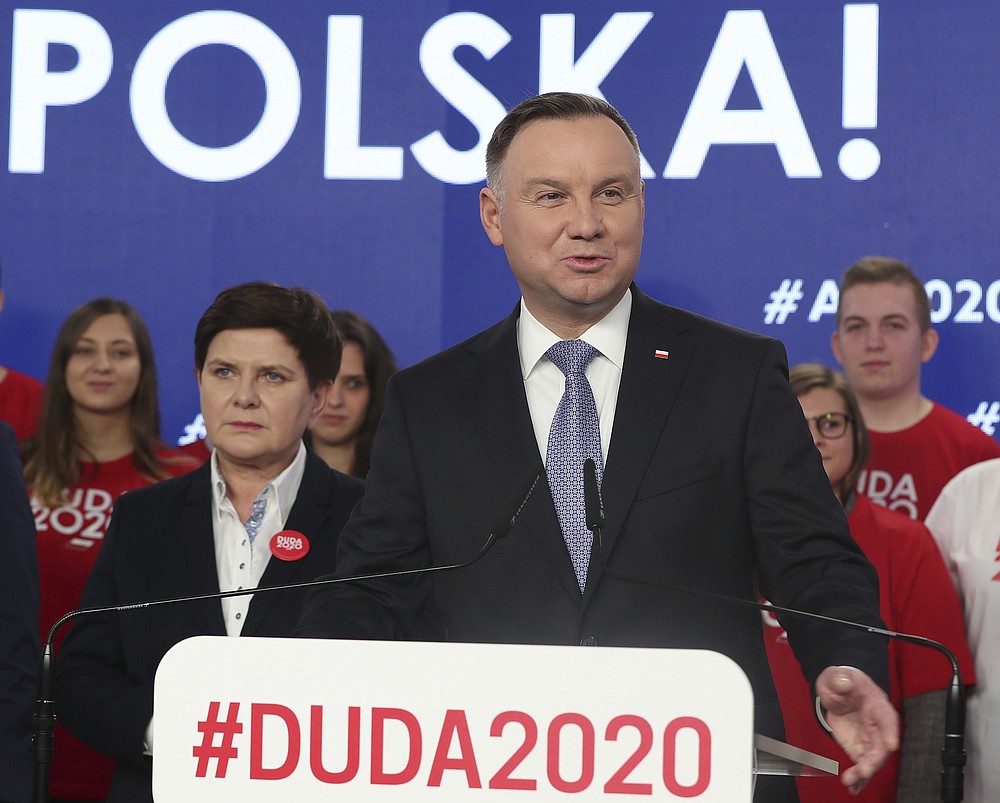 FILE - In this Feb. 19, 2020 file photo, Poland's President Andrzej Duda campaigns for his re-election in Warsaw, Poland. Poland's parliament speaker says the postponed presidential election will take place June 28. The election was originally planned for May 10 but the coronavirus pandemic forced the conservative government to put it off. (AP Photo/Czarek Sokolowski, File) 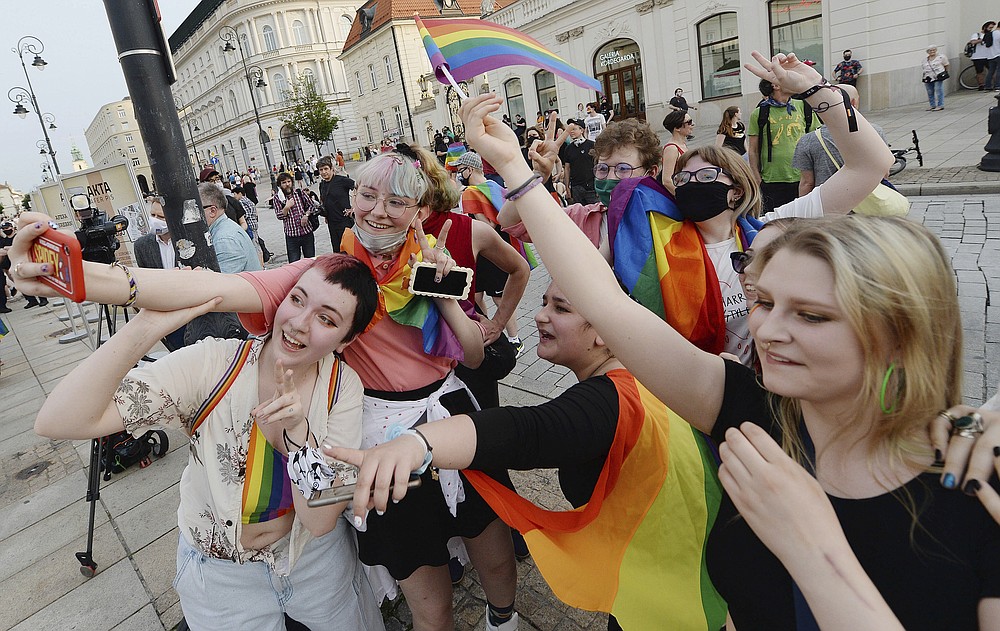 People, with Rainbow flags dance as they take part in rainbow disco flashmob in front of the Presidential Palace in Warsaw, Poland, Thursday, June 11, 2020. Polish President Andrzej Duda signed a document called Family Card which is homophobic and discriminating in the perception of the LGBT community. (AP Photo/Czarek Sokolowski)