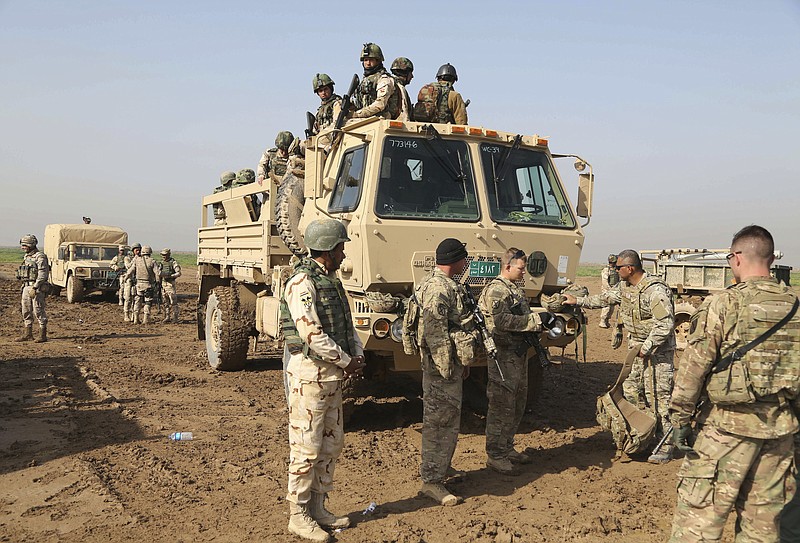 FILE - In this Sunday, Jan. 24, 2016 file photo, Iraqi soldiers participate in a training exercise with American and Spanish trainers, which includes live ammunition, at Basmaya base, 40 kilometers southeast of Baghdad, Iraq. The U.S. and Iraq launched much-anticipated strategic talks on Thursday, June 11, 2020, spanning the gamut of bilateral relations with Washington prioritizing the future of its forces in the country, and Baghdad, a dire economic crisis. But the outcome of discussions will be months away, U.S. and Iraqi officials said. (AP Photo/Karim Kadim, File)

BAGHDAD -- The United States and Iraq opened strategic talks Thursday that are to span the gamut of their bilateral relations, with Washington prioritizing the issue of the future of its forces in the country while Baghdad is expected to focus on the nation's economic crisis.

The talks, which began with an initial session in the afternoon with participants tuning in online because of the coronavirus measures, are expected to last several months. They are taking place against the backdrop of soaring tensions after the U.S. airstrike in January that killed Iranian Gen. Qassem Soleimani just outside the Baghdad airport. Iran's expanding influence in Iraq also is expected to be an underlining topic in the talks.

However, relations have improved since new Prime Minister Mustafa al-Kadhimi took over the helm of Iraq's government last month, marking a new chapter in Iraq-U.S. relations after the exit of Adil Abdul-Mahdi, under whose administration ties had cooled. Some parties, notably parliament's Iran-backed Fatah bloc, continue to call for the withdrawal of U.S. forces.

"The first stage will try to set the tone and agenda for the talks and lay on the table some of the urgent issues up for discussion," said Sajad Jiyad, an Iraqi analyst and visiting fellow with the Middle East and North Africa program at the European Council on Foreign Relations.

The U.S. team was led by David Hale, undersecretary for political affairs, and pressed issues such as the future of the U.S. forces in the country and security concerns spawning from armed militias in Iraq, early elections and violence against protesters.

Iraqi and U.S. officials said they support a scheduled withdrawal of forces from Iraq, but questions remain over time frames and the scope of the threat posed by the Islamic State group. Officials spoke to The Associated Press on condition of anonymity because they were not authorized to talk to the media.

"Probably the most important thing for the vast majority of Iraqis is how can the U.S. can assist Iraq in this very difficult period," said Jiyad. And on the American side, "whether they see value in supporting Iraq apart from security."

In a sign of support for al-Kadhimi's administration, hours after he was sworn in, the U.S. approved a 120-day sanctions waiver enabling the country to continue importing Iranian gas and electricity to meet its power needs.

Late Wednesday, a Katyusha rocket fell just a few hundred yards from the U.S. Embassy in Baghdad's fortified Green Zone, the latest of several incidents targeting the American presence in Iraq in recent months. The U.S. has repeatedly blamed Iran-backed Iraqi militias for the attacks