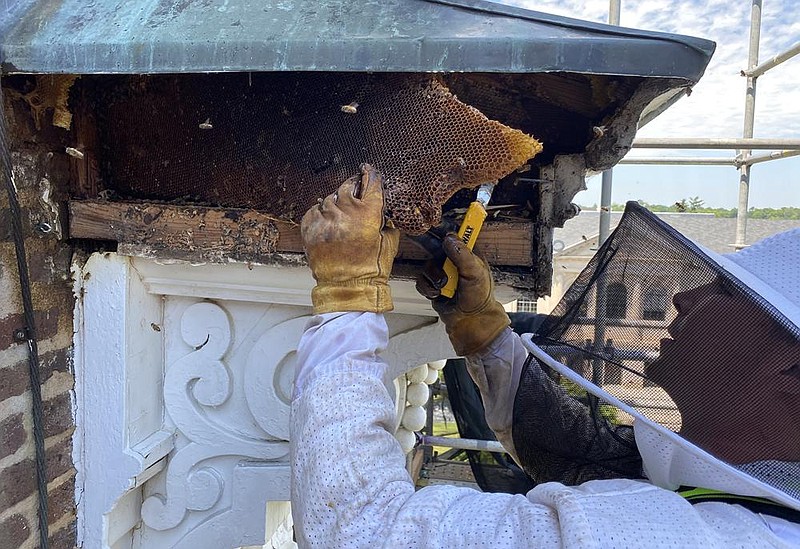 Caleb Hutcherson removes portions of a bee hive from outside the fifth floor of Old Main on the University of Arkansas, Fayetteville campus. Hutcherson, a beekeeper and UA student, worked with two others on Friday, June 5 and Monday, June 8 to remove the hive and relocate the bees to his family's farm in Prairie Grove. (Special to the Arkansas Democrat-Gazette)

FAYETTEVILLE -- An estimated 20,000 bees were removed Friday and Monday from outside the fifth floor of Old Main on the University of Arkansas, Fayetteville campus, said beekeeper Caleb Hutcherson.

"I don't believe they would have harmed anyone," said Hutcherson, a 23-year-old UA student.

The colony had made its home in a soffit, a portion of an overhanging eave. Hutcherson cut apart layers of honeycomb while using a vacuum to gather the bees. He was helped on the job by a beekeeping partner, Aavron Estep, as well as a UA facilities worker and a lift provided by the university,

The bees have been moved to a Prairie Grove farm operated by Hutcherson's family about 12 miles from campus. Pick and Peck Farms is also where Hutcherson began his beekeeping business about two years ago, C's Bees.

He said he's previously encountered larger numbers of bees than what he found outside Old Main. But the colony's honey-drenched home made it one of the biggest jobs he's had.

"It was just huge, massive chunks of honeycomb," Hutcherson said. He said he weighed the portions, which added up to about 100 pounds.

The colony's honeycomb had a queen cell but no queen bee was found, which Hutcherson said likely means that a swarm with the old queen had split off recently.

The bees had found what amounted to a perfect setup on the UA campus, said Hutcherson, a rising senior who said he's majoring in economics and agribusiness. The bees had made their home in an isolated area that gave them shelter for their honeycomb.

"There are so much clover at the U of A grounds and Old Main, so much nectar, so much for them to provide for their nest. So pretty much they found a wonderful area," Hutcherson said.

It isn't the first time bees found a home at Old Main.

In 2007, more than 100,000 bees were removed from the building's exterior so construction crews could continue restoration work on the oldest campus structure still standing.

In May, "the contractor pointed out the bees and said the hive was in a location that might interfere with building the scaffolding and the work to be done," Schlesing said in an email.

"Understanding that honey bees are a unique circumstance, we looked for someone who could remove and safely relocate them to protect the bees to the best of our ability," Schlesing said.

Approximately 250,000 flowering plants require the transfer of pollen from anther to stigma in order to reproduce, according to the U.S. Food and Drug Administration. Bees forage for nectar and pollen, transferring pollen as they travel from plant to plant.

In 2017, UA became certified as a "Bee Campus" by the nonprofit Xerces Society, a conservation organization operating an initiative known as Bee City USA to protect pollinators like bees. The campus designation is obtained after campuses make commitments that include developing a habitat plan.

"I just enjoy watching a colony grow. I love bees due to pollination for our crops, because my family farm, we have three big gardens. They're just all over, every day, helping pollinate our crops," Hutcherson said.

He said he accepts donations to his apiary for work he does to remove bees. ("As a beekeeper, you can't go in and charge people to remove swarms unless you have a pest control license," Hutcherson said.)

Hutcherson said he's removed more than 50 bee swarms this year. With the coronavirus pandemic canceling in-person classes, "I was able to just hop in a truck whenever I got a call to go save the bees."

With his business growing, he's adding another site to house bees, he said.

"The big part of my income is selling honey and selling the bees" to other beekeepers, Hutcherson said.

A pint jar of honey goes for $15 and Hutcherson also sells jars with honeycomb that cost extra. His honey is available for sale at the Prairie Grove Farmers Market that operates on Saturday mornings.

Hutcheson said he feels like he's "in between the hobby and commercial" side of beekeeping. He has other business plans and will be getting his real estate license this month, he said.

Despite wearing protective gear, on the Old Main job "I probably got stung about six or seven times," Hutcherson said.

[Video not showing up above? Click here to watch » https://www.youtube.com/watch?v=FUKcWuKlZkk]

He's not letting a few stings bother him, however.

With more than 50 hives now, "I believe by next year I'll have over 200," Hutcherson said.