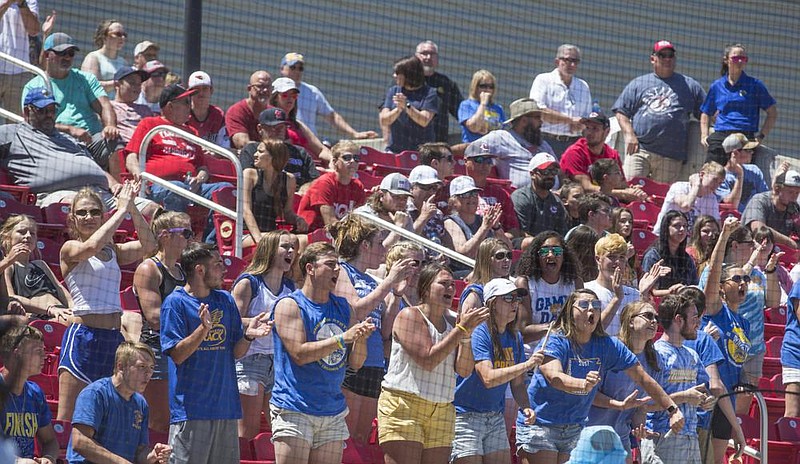 Sheridan finished off last season's state championship the same way it did the three previous seasons, but little did the Lady Yellowjackets know that their dynastic rule would be interrupted not by an opposing team, but by a global pandemic.

A large number of Sheridan fans showed up at the University of Arkansas' Bogle Park in Fayetteville last year wearing blue-clad T-shirts with the word "Dynasty" displayed across the front in chalkboard-styled type as a sign of support for the Lady Yellowjackets ahead of their Class 5A championship game against Greenwood.

That show of solidarity turned out to be both significant and fragile for Sheridan, which went on to beat the Lady Bulldogs and win a title for the fourth season in a row. Immediately following the game, there was talk about the team's chances of capturing a fifth consecutive title in 2020, but the coronavirus ensured there would be no drive for five this year.

"It was heartbreaking," Sheridan Coach Tamara Strawn said, referring to the disease that caused all sports globally to be either suspended or canceled for the majority of the spring. "I have felt selfish as a coach and as a mom to feel so disappointed, and I shouldn't be. But these girls and this program are my heart, and to not have this season was numbing."

More times than not over the past 21 years, Lady Yellowjacket opponents were usually the ones left feeling empty.

The shirts several Sheridan supporters wore during last season's final were captivating because the Lady Yellowjackets have long been one of the state's best.

Sheridan won Arkansas' first-ever state fast-pitch softball title in 1999 and have been a powerhouse ever since. It's what the team has been able to accomplish the past few years that's put them in elite territory.

The Lady Yellowjackets had played in a state final in each of the past six seasons prior to 2020, with the last four resulting in championships.

"I sit back all the time and reflect," said Strawn, who's been with the program for eight years and took over after Eddie Paul Woodall stepped away following the 2014 season. "I watch videos, look through pictures. ... being a coach is amazing but knowing all these girls and what they have achieved, how much they have grown is even more amazing.

"I thank God every day for placing me where He did. The people that have came into my life have molded me in many ways."

What Strawn has done with the Lady Yellowjackets during their dominant four-year run is nothing short of astonishing.

Sheridan has gone 111-18-1 since 2016. During that span, the Lady Yellowjackets dropped consecutive games just three times. Strawn's group was especially dominant in 2018 when they won their final 22 games of the season. Of its 30 victories that year, Sheridan allowed more than two runs just six times while pitching 15 shutouts.

"Each season we say this is a new year, new goals," Strawn explained. "We want to be the hardest working team in the state, the best defensive team in the state and an offensive threat. We want to grow and learn life lessons through it all."

Last year, the Lady Yellowjackets lost only once to a team in its class and finished off a 27-4 season with their 4-3 victory over Greenwood to join Foreman as the only softball programs in state history to win four championships in succession. The Lady Gators eventually won six consecutive titles [2006-11].

With a senior-laden team led by pitchers Kaitlyn Howard and Bailee Bibb, Sheridan felt it had a legitimate shot of extending its run to five.

"It was one of our goals, and we talked about it daily," Strawn acknowledged. "We sure were senior heavy ... lots and lots of amazing talent and leaders, but this group was special because of perseverance and strength. What they have been through together over the years has been tough."

Bringing another championship back to Grant County would have been extra special for Strawn because it would've afforded her a chance to share a fourth crown with her daughter on the roster.

"Not many people get to experience [winning a title] as a player with their coach, much less with their mom as a coach," said Carley Strawn, a senior who batted .404 and had eight doubles last season. "It's been special for us. [Coach Strawn] is enthusiastic, determined and cares about every one of her players no matter their role on the team. She doesn't put up with drama, and she doesn't care what grade you are in.

"If you can help the team, you'll play."

Carley Strawn noted that Sheridan was always the team with a target on its back, and one that everyone wanted to beat. However, those factors enabled an already tight-knit group to become even tighter, which made it even tougher for her to accept that neither she, nor her fellow seniors will get an opportunity to add to their title haul.

"I was pretty much in denial, and I kind of still am," she said. "It's not something that anyone should have wanted to happen, especially to a team who had a chance to bring home another title."

The Lady Yellowjackets, instead, are forced to look at the situation in a different light. Sheridan still has its four-year postseason winning streak intact, and its underclassmen will eventually get a shot to fill the team's trophy case. And according to North Little Rock Coach and former Sheridan player Courtney Clark, the talent level isn't going to drop off any time soon. 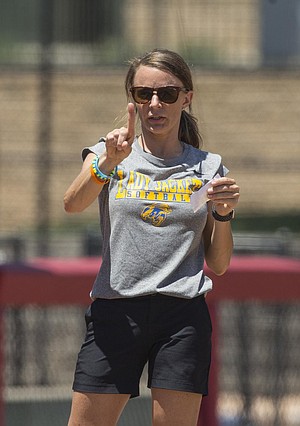 Photo by Ben Goff
Sheridan, winners of the past four Class 5A softball titles, had its run at No. 5 put on hold by the coronavirus pandemic. Coach Tamara Strawn said “to not have this season was numbing.” (NWA Democrat-Gazette/Ben Goff)

"Those earlier [Sheridan] teams had two or three college level players, but the last six have had six to eight, which makes a difference at the 5A and 6A levels," said Clark, who was a three-time all-state selection for the Lady Yellowjackets from 2004-06 before putting together an impressive four-year career at Delta State University. "I am a huge fan of Coach Woodall, but I believe Strawn has done a fantastic job of getting the right combination of players and having them ready to compete to win state championships. The program has a rich history and as an alumnus, I'm proud of where that program is, and the direction in which it's going."

Strawn knows her team will be able to defend its title in the future, but she can't help thinking about what might have been for her Lady Yellowjackets.

"I know it would have been another amazing thing," she said in reference to winning a fifth title in seven years. "Our YJ Nation community are the best supporters and fans. They follow our programs all over the state, and we are so fortunate.

"Not to sound cocky, but I feel confident we would have finished things off the way we typically do."