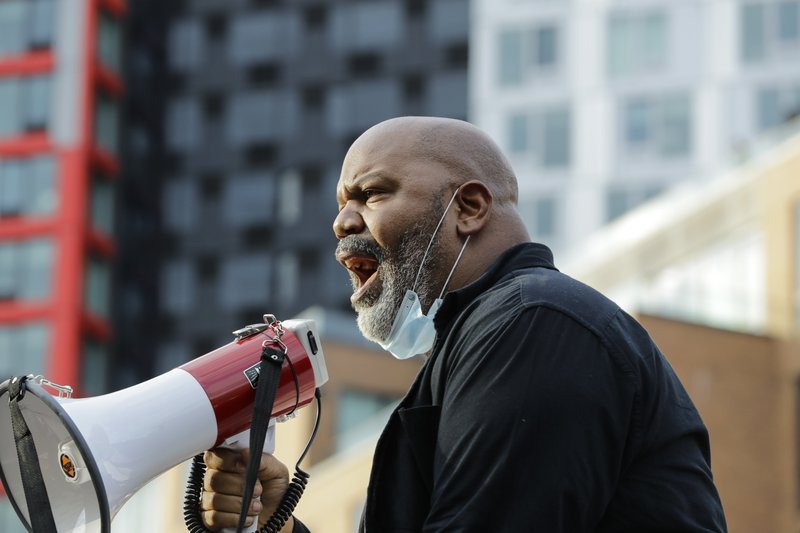 Pastor James Roberson leads a prayer with protesters during the Prayerful Protest march for George Floyd, on Tuesday, in the Brooklyn borough of New York. Floyd died after being restrained by a Minneapolis police officer on Memorial Day. (AP/Frank Franklin II)

NEW YORK -- As days of anti-racism protests sparked by police killings push Americans toward a national reckoning, religious leaders are stepping more directly into the politics surrounding discrimination, entering into a dialogue that cuts across lines of faith and color.

Groups from multiple denominations across Christian, Jewish and Muslim faiths have publicly called for action against racism, aligning with peaceful demonstrators' goals following the killing of George Floyd in Minneapolis. Even beyond those statements, the amount and diversity of religious involvement in the ongoing protests suggests a possible change for faith-driven engagement in racial justice issues.

"I've seen people of different faiths coming out and saying 'this was wrong' in ways I didn't see before," said Rev. Traci Blackmon, associate general minister of justice at the United Church of Christ and an early spiritual leader in the Black Lives Matter movement.

Religion's role in struggles against racial bias long predates Floyd's killing, which sparked mass demonstrations across the United States and even in other countries. But a notable shift has taken place this week.

Among those who've publicly backed protesters are clergy from the Southern Baptist Convention, the U.S. Conference of Catholic Bishops, the Church of Jesus Christ of Latter-day Saints, and Orthodox and Reform Judaism.

Meanwhile Catholic and Episcopal leaders openly criticized President Donald Trump after peaceful demonstrators were forcefully cleared to make way for his brief visit and photo-op outside the historic St. John's Church near the White House.

On Wednesday, Bishop LaTrelle Easterling, leader of the United Methodist Church's Washington-area conference, joined the Rev. Mariann Budde, the bishop of Washington's Episcopal diocese, which includes St. John's, and other faith leaders for a prayer vigil that aimed to orient the religious conversation around fighting racism.

"I think that all leaders that consider themselves to be religious or moral leaders have an obligation to rise and to speak to this moment, because institutional racism and supremacy cannot be dismantled by African American leaders alone," said Easterling, who is black. "Those who enjoy the privilege of those systems must rise."

The vigil was initially set to take place at St. John's but had to move to a nearby block after local law enforcement extended the security perimeter around the White House.

Budde, who expressed outrage Monday over Trump's use of St. John's as a backdrop, said white Americans need to engage more in "the realities of this country that we ... are allowed to be blind to in ways that cost people of color."

Trump's visit, in which he held up a Bible and said "we have a great country," was at least in part intended as a show of solidarity with faith, according to the White House. But the maneuver nudged Budde and other religious leaders to wade further into the political realm, airing their disagreement.

Rev. Russell Moore, leader of the Southern Baptists' public policy arm, issued a statement in response to the visit calling the killing of black Americans, the use of force against peaceful protesters and the destruction of property "morally wrong."

"I am brokenhearted and alarmed by all of this," said Moore, whose criticism of Trump during the 2016 campaign prompted the then-candidate to blast him as "a terrible representative of evangelicals."

Many black religious leaders are welcoming the new allies, while lamenting that it took Floyd's death to jar white congregations into paying attention.

Twin Cities-based minister JaNae Bates, who works with progressive faith groups, said she's glad to see diverse conversations about racism, but "it's really harmful and hurtful that it takes yet another body for us to get there."

"We've had many faith leaders who are awakening to the hypocrisy of a 'freedom for all' America," Bates added, saying such clergy are "experiencing a lot of cognitive dissonance" as their visions of an equitable society crumble.

Imam Makram El-Amin of Minneapolis' Masjid An-Nur mosque, which has been supporting neighbors amid the protests in that city, said people of faith should be part of a diverse front against racism.

But, he said, "voices of those who've been subject to this oppression -- in this case, African Americans -- should be the leading voices."

One of Trump's staunchest evangelical backers, the Rev. Franklin Graham, decried the violence that has broken out at a number of protests and lauded Trump's visit to the church. But even he allowed that clergy have more work to do in talking to minority communities, saying in an interview that "we certainly do that" in his ministries "but that doesn't mean we can't do it better."

Other white faith leaders are focusing on helping their flock wrestle with tense and sometimes uncomfortable questions about race, bias and privilege.

An honest dialogue in white congregations requires both "brave clergy" and "willing people in the pews," said Rev. Joshua Whitfield, a priest at the St. Rita Catholic Community in Dallas.

"I think the moment is ripe for people to let go ... and say, 'I do need to look at this more deeply, I do need to explore the original sin,'" Whitfield said.

Blackmon, who pastors in Missouri, urged her white counterparts to take their words of support for healing racial injustice a step further and treat deep-rooted bias as a universal problem requiring more action.

"I'm grateful they're saying those things, but what I want from you is what costs you. Will you be there when it costs you?" Blackmon said. "And for me, that's in the capitol, in the statehouse, in the courthouse, in places where systemic racism rages."

Information for this article was contributed by Jessie Wardarski of the Associated Press.

Associated Press religion coverage receives support from the Lilly Endowment through the Religion News Foundation. The AP is solely responsible for this content.