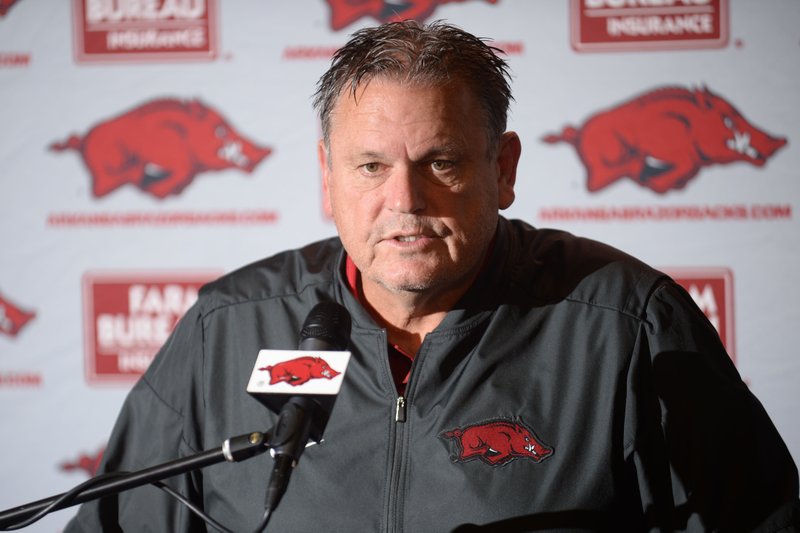 Arkansas coach Sam Pittman speaks Wednesday, Dec. 18, 2019, during a press conference to discuss the early signing period at the Fred W. Smith Football Center on the University of Arkansas in Fayetteville. Pittman talked to the media Friday about the end of spring practice. - Photo by Andy Shupe

FAYETTEVILLE — Catrell Wallace, who signed with the University of Arkansas football team in December and was arrested in February in connection with sexual assault, will not play for the Razorbacks, UA coach Sam Pittman said Wednesday.

During a teleconference with reporters, Pittman said he thinks Wallace will play at a junior college but did not say which one.

Wallace, from Bryant, was arrested Feb. 24 by the Benton Police Department in connection with second-degree sexual assault, a Class B felony, and tampering, a Class D felony, according to his detention profile on the Saline County Sheriff’s Office website.

The investigation into Wallace is ongoing, said Krista Petty with the Benton Police Department. Police said the incident under investigation occurred on Jan. 1 when Wallace was 18 and the victim was 12.

"Although it appears to have been a consensual encounter, BNPD detectives were able to determine that Wallace had reason to believe the victim was underage at the time of the crime,” police wrote in a statement in February. “It was also noted that Wallace instructed witnesses to lie about the crime in an effort to conceal it.”

At the time of the arrest, Pittman said he was gathering information about the incident. As recently as May 4, Pittman said Wallace's status with the team was unresolved.

As a defensive end and linebacker, Wallace recorded 60 tackles - including a sack and six others for loss - broke up four passes and blocked four punts as a senior on Bryant’s Class 7A state championship team.