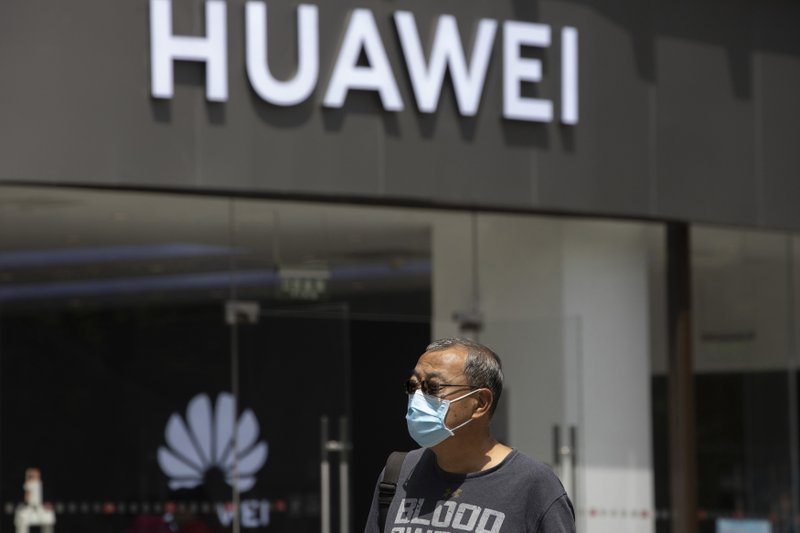 FILE - In this May 18, 2020, file photo, a man wearing a face mask to protect against the coronavirus walks past a Huawei retail store in Beijing. One of China&#x2019;s biggest tech companies has criticized the Trump administration for &#x201c;politicizing business&#x201d; after it slapped export sanctions on 33 more Chinese enterprises and government entities. The announcement expanded a U.S. campaign against Chinese companies Washington says might be security threats or involved in human rights abuses. Beijing criticized curbs imposed earlier on tech giant Huawei and other Chinese companies but has yet to say whether it will retaliate. (AP Photo/Ng Han Guan, File)

TORONTO -- Two of Canada's three major telecommunication companies announced Tuesday that they have decided not to use Chinese tech giant Huawei for their next-generation 5G wireless network.

Canada and its security agencies have been studying whether to use equipment from Huawei as phone carriers prepare to roll out 5G technology. Fifth-generation technology is designed to support a vast expansion of networks to facilitate medical devices, self-driving cars and other technology.

Huawei is the world's biggest supplier of network gear used by phone and internet companies, but has long been seen as a front for spying by China's military and its highly skilled security services.

The U.S. has urged Canada to exclude Huawei equipment from its next-generation wireless networks as the the U.S. claims Huawei is legally beholden to the Chinese regime. The United States and Australia have banned Huawei, citing concerns it is an organ of Chinese military intelligence, which the company denies.

The Canadian government is studying the use of Huawei as Canada and China are locked in a political dispute. China's imprisonment of Canadians Michael Kovrig and Michael Spavor is widely seen as retaliation for the arrest in Canada of Huawei senior executive Meng Wanzhou on a U.S. extradition warrant. A Canadian judge ruled last week that the U.S. extradition case against a senior Huawei executive can proceed to the next stage.