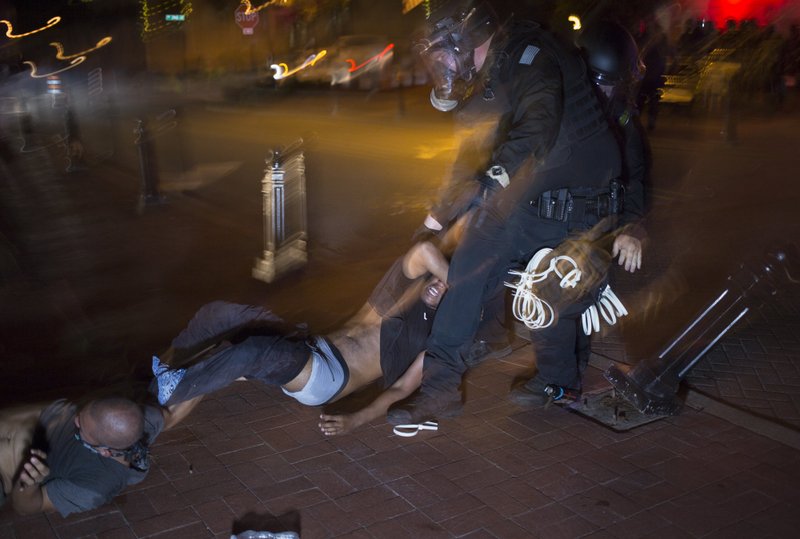 The firing began after 9 p.m. Monday, according to posts on Bentonville’s Face-book page.

At a little after 9 p.m. a post read, “Crowd size has seemed to decrease. Smaller groups have broken away. One medical call near the statue. Fireworks currently being deployed in the area.”

The Sheriff’s Office issued warnings for the crowd to disperse, according to the Facebook posts. The crowd refused and tear gas was used. A post at 9:25 p.m. said the crowd was still refusing to leave.

Tear gas was fired several times into the crowd as Sheriff’s Office deputies and Bentonville police stood in a line near the front of the courthouse. Some in the crowd pick up the tear gas canisters and threw them back at the officers.

About 10:15 p.m., law enforcement was gathered on the steps of the courthouse in riot gear facing the crowd. Protesters chanted for police to leave.

Benton County Sheriff’s Office officials estimated the crowd at about 1,500 people at its peak.

The protest had been going for several hours, peacefully, until 9 p.m. It was unclear at press time why the deputies started firing the tear gas. Injuries, if any, also were unknown.

Protests, sometimes violent, have erupted across the nation in the wake of the death of George Floyd, a 46-year-old black man who died May 25 after a white Minneapolis police officer knelt on his neck for several minutes after he was detained. Former officer Derek Chauvin was arrested in connection with third-degree murder and second-degree manslaughter. Three other officers were fired in connection with the incident.

Before the mayhem erupted, protesters circled the downtown square calling for an end to police brutality against minorities.

The continuous line of people passed a statue of a Confederate soldier, a focal point of previous calls to end racism in Northwest Arkansas. The Arkansas Division of the United Daughters of the Confederacy announced Monday afternoon it has agreed to move the statue after discussion with community leaders, according to a news release from the group.

The property where the statue sits is county-owned, and the Daughters of the Confederacy own the statue, County Judge Barry Moehring said. Bentonville maintains the beautification and maintenance of the property.

Many people who gathered on the square Monday night wore some sort of black clothing and face coverings and held high hundreds of homemade signs.

[Don't see the video above? Click here to watch: youtube.com/watch?v=Amq6rEmENWw.]

“No justice, no peace”and “Hands up, don’t shoot” were just a few of the chants that echoed through downtown. Drivers honked their horns in support, and the boisterous crowd gave cheers back. At point, the whole group took a knee as one in silence.

Antonio Covington of Rogers said he attended to show support for his two daughters, Alicia and Amber, who took part in the protest and to back the cause in a peaceful way.

Vicente Guerrero of Rogers said it was important to be at the protest.

“When I saw that video, I saw another black man’s life taken,” he said of Floyd. “I saw another body count that will add to the divide in our country.”

The protesters at one point stopped and turned to look across the street at several armed men. They began to chant, “Hands up, don’t shoot” in their direction. They at first believed the men were there as counter protesters until Bryce Conn, who was armed with an AR-15, told one of the protesters the group was there to support them.

“We are not a bunch of racists bigots” Conn said.

Conn said they strongly support the Second Amendment and wanted people to see a different image.

In Fayetteville, about 30 residents and a dozen police officers gathered in front of the Police Department on Monday night. The department heard people were planning to demonstrate outside the station and decided to greet them with hot dogs and refreshments, said Sgt. Anthony Murphy, department spokesman.

“That’s what our Police Department and our city is about. We’re inclusive,” he said. “I think it shows here today.”

The demonstrators knelt in mourning for several minutes. Officers lined up beside them, bowing their heads in a moment of silence.

Sky Gray, 23, said she grew up in the city and there’s something to be gained from smaller, peaceful demonstrations, even if larger ones in metropolitan areas tend to gain national attention.

Gray held a sign that said “I can’t breathe” on one side and the names of several black Americans killed by law enforcement in recent memory on the other.

“Institutionalized violence has been going on for so long that there’s got to be a breaking point somewhere,” she said. “We’ve got to do something.”

STATUE ON THE MOVE

The Daughters of the Confederacy agreed to work with the Benton County Historical Society and other community members to move the monument to a permanent private park named “James H. Berry Park,” according to the group’s announcement. The park is adjacent to the Bentonville Cemetery, where former governor Berry is buried.

The agreement will allow the Daughters of the Confederacy to continue to display and preserve the historical significance of the monument and its connection to the history of Benton County in perpetuity, according to the release.

Sheree Miller is a member of Shame of Bentonville. The group has been protesting for more than a year for the removal of the monument. She was excited to learn about the removal.

“It means to me when my grandchildren and relatives come to Bentonville that I can take them to the square without being ashamed,” she said.

A Justice for George Floyd, Black Lives Matter peaceful protest is planned for 6:30 p.m. tonight on the Fayetteville square, according to a Face-book post.

Several protest events took place in Fayetteville late last week and over the weekend in response to the police officer’s act of excessive force that killed Floyd, according to Fayetteville news release.

While most participants engaged in peaceful protests and demonstrations, some exhibited behaviors that created unsafe conditions for themselves and others, the release stated. These included standing in streets, stopping moving vehicles and engaging in person-to-person confrontation. Additionally, some participants didn’t practice social distancing or wear face coverings to help prevent the spread of covid-19, the release stated.

Fayetteville police made at least three arrests related to the weekend protests.

According to information from the police, one man who was in a group of protesters in the area of College Avenue and Lafayette Street on Saturday was cited for disorderly conduct after he was seen to be “aggressive with drivers who did not show support for his cause.” Police said the man slapped at vehicles as they drove past him.

Another man in the same area Saturday was cited for criminal mischief after he was seen spray-painting a traffic signal pole.

A third man was arrested Monday and cited for disorderly conduct and assault. Police said the man stopped his vehicle in traffic on College Avenue and got out of the vehicle. The man began arguing with protesters and pushed a woman.

All three men were issued citations and ordered to appear in Fayetteville District Court.

“Part of what makes Fayetteville unique is how engaged our community is on local, state, national and global events,” Mayor Lioneld Jordan said. “Our residents are protesting Mr. Floyd’s horrifying and inexcusable death through peaceful demonstrations and dialogue.”

The event Monday night occurred despite a cancellation announcement earlier in the day from one of organizers.

Courtney Reed, an organizer for Bentonville’s Justice for George Floyd, said she postponed her group’s participation because of threats it received from white supremacists via social media.

Reed and Shania Wilson were the organizers of the Bentonville event, according to its Facebook page. Reed said they took the threats seriously and wanted to have more security. She said police were aware of the threats.

The hope was to reschedule the protest for this weekend, she said.

Bentonville Police Chief Jon Simpson confirmed Monday afternoon Wilson and Reed had postponed their event. However, other groups and individuals still planned some protest on the square, Simpson said.

“We have been made aware of some protest planned in the city of Bentonville regarding the death of George Floyd,” Mayor Stephanie Orman said. “We respect and support peaceful protest and see this as an individual’s right as part of our democracy. This incomprehensible act has caused anger and frustration, but we ask for that anger to be channeled in a positive manner without influence from outside organizations.”

Tom Sissom and Stacy Ryburn contributed to this report.