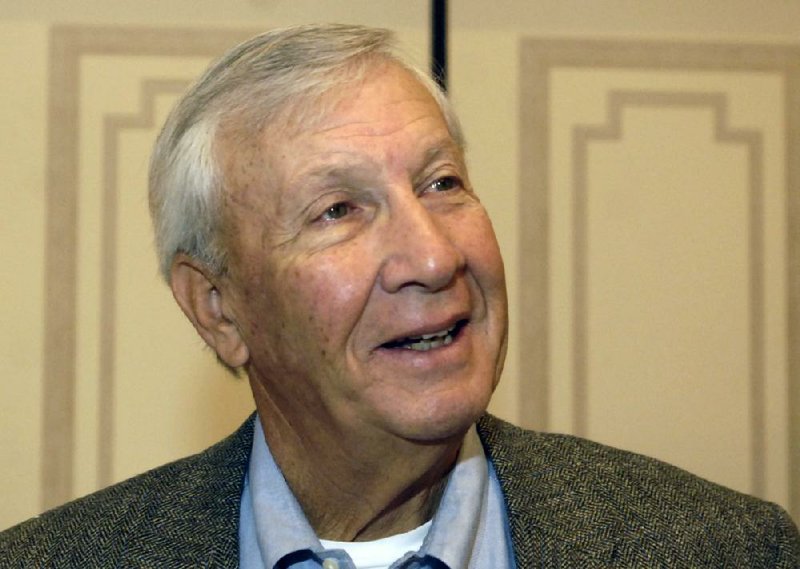 FILE - In this Dec. 6, 2005, file photo, former NCAA college football coach Pat Dye responds to a question during an interview in New York. Former Auburn coach Pat Dye, who took over a downtrodden football program in 1981 and turned it into a Southeastern Conference power, has died. He was 80. Lee County Coroner Bill Harris said Dye passed away Monday, June 1, 2020, at the Compassus Bethany House in Auburn, Ala. (AP Photo/Jason DeCrow, FIle)

College Football Hall of Famer Pat Dye, who took over a downtrodden Auburn football program in 1981 and turned it into an SEC power, died Monday. He was 80.

Lee County Coroner Bill Harris said Dye died at a hospice care facility in Auburn, Ala., from complications of kidney and liver failure. Harris said Dye tested positive for covid-19 after being admitted to the hospital for renal problems, but was asymptomatic.

When Dye came to Auburn, he inherited a program that was deeply divided after only three winning seasons in the previous six years. In 12 years, he had a 99-39-4 record, Auburn won or shared four conference titles and the Tigers were ranked in The Associated Press' top 10 five times.

Dye's overall coaching record was 153-62-5 in 17 years at Auburn, Wyoming and East Carolina. He was inducted into the College Football Hall of Fame in 2005.

"On behalf of our family, I want to thank all of the people from around the country who have offered their support and admiration for dad these past several days," said Dye's son, Pat Dye Jr. "Dad would be honored and humbled to know about this overwhelming outreach. The world has lost a pretty good football coach and a great man. He was beloved, he touched so many lives and he will be missed by many, especially our family."

Dye's coaching career ended in November 1992 when he was forced to resign after a pay-for-play scandal rocked the Auburn program, which was placed on two years' probation.

Dye served as athletic director as well as coach for most of his career with Auburn. He remained associated with the university after his resignation and was a frequent commentator on football talk-radio shows.

Auburn was 5-6 in Dye's first season, but he quickly turned it around. In 1982, the Tigers were 9-3, defeated arch-rival Alabama for the first time in 10 years and made their first bowl trip since 1974.

By the next season, Auburn was back on top in the SEC -- a league that had been dominated for more than two decades by Bear Bryant and the team on the other side of the state, Alabama.

Over the next seven years, there would be three more SEC titles in a row, from 1987-89, and a host of individual awards for his players. Running back Bo Jackson won the Heisman Trophy in 1985, defensive lineman Tracy Rocker took home both the Outland and Lombardi trophies in 1988, and linebacker Aundray Bruce was the No. 1 pick in the 1988 NFL Draft.

In 1989, Dye realized another dream when Alabama made its first trip ever to Auburn. The Tigers won the historic game 30-20, ending Alabama's quest for a perfect record and national championship.

The "Iron Bowl" series, which had been played every year in Birmingham, Ala., since 1948, began being played at Auburn's Jordan-Hare Stadium every other year beginning in 1993.

"He's one of the people that changed the direction of that rivalry," said David Housel, Auburn's sports information director under Dye who eventually became athletic director. "Alabama had won nine years in a row; he broke that streak. And he was instrumental in getting the game to Auburn.

"Getting that game here has made all the difference not only for Auburn but also for Alabama. As he often pointed out, Alabama wouldn't have that fine facility they have over there [Bryant-Denny Stadium] -- and it's really great -- if they were still playing Auburn in Birmingham."

Auburn plays on Pat Dye Field at Jordan-Hare Stadium. The school put his name on the field in 2005.

The only thing that eluded Dye was a national championship. His teams finished in the top 10 five times but never held the top spot. In 1983, the 11-1 Tigers featuring Bo Jackson were No. 3 -- and remained there despite winning their bowl game while Nos. 1 and 2 lost. Miami leapfrogged to the top of the AP poll with its thrilling 31-30 victory over top-ranked Nebraska.

In 1990, the Tigers were the choice of some prognosticators to win it all, but they fell from the national championship picture with a tie and three losses -- including the first setback to Alabama after four consecutive victories.

"Not only was he a phenomenal football coach, but an even better person," Ivey said. "For years, I have known Pat personally and have always valued his friendship and colorful commentary. He had great takes on both football and life."

Dye, a tough field master with a folksy drawl, was determined to make it back to the top. But tape recordings secretly made by Auburn player Eric Ramsey with coaches and others were made public, exposing a pay-for-play scandal that drew wide media attention and landed Auburn on probation. It also cost Dye his job.

A native of Augusta, Ga., Dye played football for Wally Butts at Georgia from 1958-60. After two seasons in the Canadian Football League, he went into coaching -- ironically at Alabama, where he was in charge of linebackers and recruiting for Bryant.

Dye landed his first head coaching job in 1974, taking over at East Carolina. He posted a 48-18-1 record in six years and built the Pirates into a team that could compete -- and win -- against neighboring Atlantic Coast Conference schools.

Dye moved to Wyoming in 1980 and the Cowboys went 6-5, their first winning season in eight years. It also was to be Dye's only season in Laramie.

Auburn was looking for a coach after Doug Barfield was forced out at the end of the 1980 season. According to some accounts, the Tigers' first choice was longtime Georgia coach Vince Dooley, an Auburn alumnus who was in the process of leading the Bulldogs to their first national championship.

But Dooley decided to remain at Dye's old school and Dye took the Auburn job. By the time Dooley retired in 1988, Dye was firmly entrenched at Auburn and didn't even consider returning to his alma mater.

"We competed hard as coaches but remained good friends, and after football shared our love of plants, especially Japanese Maples," Dooley said. "Pat was a solid, fundamental football coach who related well with his players."

Fran Tarkenton, a Georgia teammate and Pro Football Hall of Famer, said he has "lost one of the best friends I have ever had."

"I never played with a greater football player than Pat Dye," Tarkenton said. "He was the ultimate teammate, and I loved the guy. He had so many assets as a player: quick, creative, as great of a competitor as I ever played with. He was instinctive, as all great players are. He just simply would not be denied."

Dye is survived by his four children, Pat Jr., Missy, Brett and Wanda; nine grandchildren; and his partner of 18 years, Nancy McDonald.

The Crooked Oaks Legacy Foundation has been established to honor Dye.