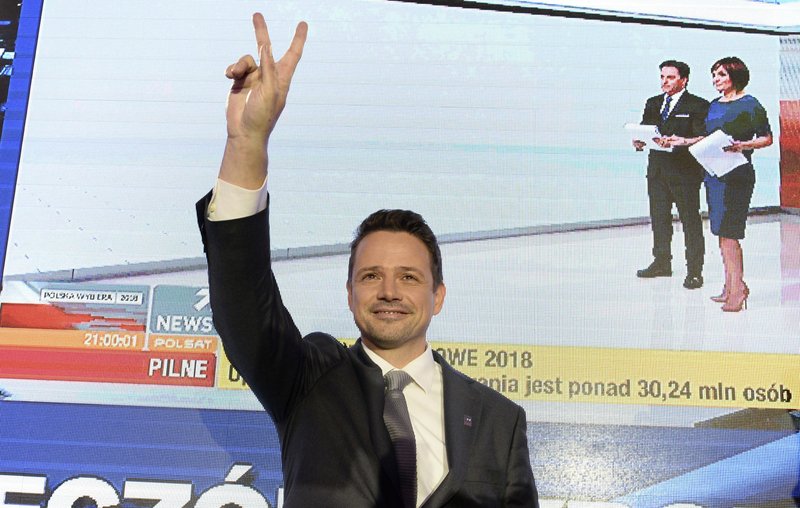 FILE - In this Sunday, Oct. 21, 2018 file photo Warsaw city mayor candidate from the main opposition party Civic Platform, Rafal Trzaskowski reacts as first exit polls indicating him as the winner are announced in Warsaw, Poland. Trzaskowski, a pro-European Union liberal, has recently joined the race for the nation's president and has emerged as the main challenger to incumbent President Andrzej Duda who had previously seemed certain to win. The date of the vote is yet to be announced. (AP Photo/Alik Keplicz, File)

Warsaw's liberal mayor, Rafal Trzaskowski, made a late entry into Poland's presidential election and has quickly emerged as the main challenger to the conservative incumbent, Andrzej Duda. He has injected competition and suspense into a race that Duda had seemed certain to win.

Trzaskowski jumped in after the coronavirus pandemic forced the conservative government to postpone the election, originally scheduled for May 10. Civic Platform, a centrist, pro-EU party, seized its chance to replace its original candidate, who was polling in the low single digits.

A new date for the election has not been announced, but the conservative ruling Law and Justice party, which backs Duda, says it wants the election held June 28. If no candidate gets at least 50% of the vote, a runoff would take place July 12.

With a field of 10 candidates, it is considered likely that Duda and Trzaskowski, both of whom are 48, will face off in the runoff. Many Poles feel this is the most important election since Poland threw off communism three decades ago.

"At last I know who to vote for. Trzaskowski can really change Poland's politics, and they need changing," said Aldona Stefanowicz, 58.

The Polish president can propose laws and, most important, veto laws passed by parliament. He is also the supreme commander of the armed forces.

Winning this election is a matter of key importance for Law and Justice if it wants to continue putting its conservative stamp on the country and completing a contentious takeover of the judicial system. Over the past five years Duda has very rarely blocked the party's plans.

Liberal critics of the government see the election as the last chance to save Poland's democracy and mend its relations with the EU, which have soured badly. The EU has denounced laws that have consolidated Law and Justice's control of the courts and other judicial bodies, considering them a violation of the democratic standards of the 27-member union.

He earned a doctorate in political science from Warsaw University in 2004 with a dissertation on the EU decision-making system, and launched his political career as adviser to the Foreign Affairs Committee of the European Parliament. In 2009 he won a four-year term as a member of the EU parliament.

From 2013-14 he was the administration and digitization minister in the government of then-Prime Minister Donald Tusk, who later served as EU president. Later he served as deputy foreign minister for EU affairs and as Poland's negotiator in areas including sanctions towards Russia and energy security.

In 2017, he was awarded France's highest distinction, the Legion of Honor, for strengthening Polish-French relations.

While he criticizes Poland's conservative government, Trzaskowski also has said he does not want the EU to punish Poland with financial sanctions. He argues that would hit ordinary people hardest and instead wants the EU to bypass the national government and make its funding directly available to local governments.

In 2015 he became a lawmaker in the Polish parliament and since 2018 he has been the mayor of his hometown of Warsaw, winning support from liberals for his strong support for LGBT rights.

His strong position -- unusual in this largely conservative and mostly Catholic country -- triggered a backlash. Ruling party leader Jaroslaw Kaczynski denounced the gay rights movement as a threat to the Polish nation and many other Polish municipalities declared themselves "LGBT-free zones."

Trzaskowski has said his win would launch a "huge wave of change." It's unclear, however, whether enough Poles will embrace the kind of change he represents.

Trzaskowski is the son of late pianist and composer Andrzej Trzaskowski. He was briefly a child actor in a children's series, an experience he remembers as a "nightmare."

In the dying days of communist rule, when he was 17, he helped the pro-democracy Solidarity movement organize Poland's first partly free election in 1989, putting up posters and even sweeping the office floor. The historic vote led to the ouster of communists.