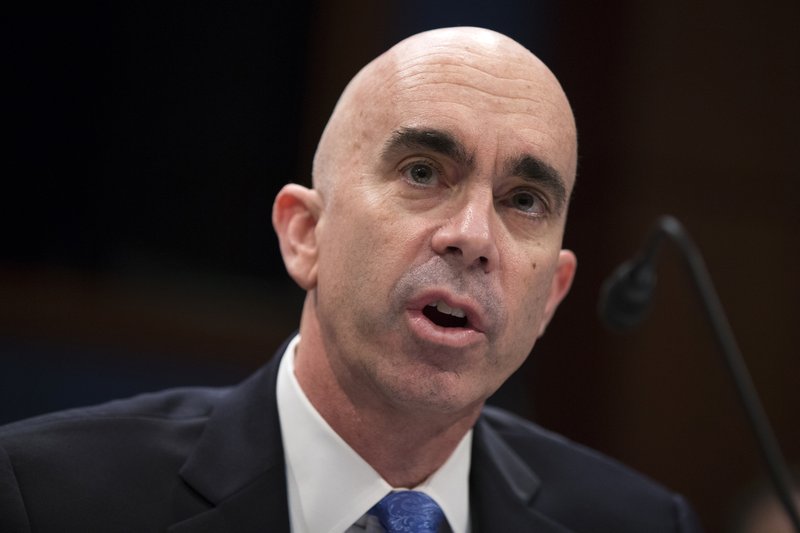 WASHINGTON -- Members of three House and Senate committees will interview former State Department Inspector General Steve Linick on Wednesday as part of an investigation by House Democrats into his abrupt firing by President Donald Trump.

Linick will speak to members of the House Foreign Affairs Committee, the House Oversight and Reform Committee and the Senate Foreign Relations Committee, according to two congressional aides working on the investigation who requested anonymity to discuss the closed-door meeting.

Democrats announced Friday that they are expanding their probe into Linick's firing last month with a series of interviews. The investigation is part of a larger effort by Democrats and some Republicans to find out more about Trump's recent moves to sideline several independent government watchdogs.

The Democrats plan to interview multiple officials in the administration who may have more information about Linick's dismissal May 15, including whether Secretary of State Mike Pompeo recommended the firing for retaliatory reasons. Pompeo has denied Linick's firing was retaliatory but has not given specific reasons for his dismissal.

The investigation is being led by House Foreign Affairs Committee Chairman Eliot Engel, D-N.Y., House Oversight and Reform Chairwoman Carolyn Maloney, D-N.Y., and New Jersey Sen. Bob Menendez, the top Democrat on the Senate Foreign Relations Committee. Republicans on those panels will also be invited to question Linick and other witnesses.

"If Secretary Pompeo pushed for Mr. Linick's dismissal to cover up his own misconduct, that would constitute an egregious abuse of power and a clear attempt to avoid accountability," the Democrats said in a statement Friday.

The committees said they will release transcripts shortly after each interview.

It's unclear whether Linick will go to Capitol Hill or appear virtually for the transcribed interviews. The House will be out of session over the coming week as lawmakers work from home during the coronavirus pandemic.

The committee has asked several other State Department officials to sit for interviews in the inquiry, including Undersecretary of State for Management Brian Bulatao, Assistant Secretary for Political-Military Affairs Clarke Cooper, Pompeo executive secretary Lisa Kenna and acting State Department legal adviser Marik String, according to the congressional aides.

Democrats and some Republicans have pushed the administration for more answers about the firings, but the White House has provided few, simply stating the dismissals were well within Trump's authority.

Pompeo said after the firing that he had been concerned about the inspector general's work for some time and that he regretted not calling for his dismissal earlier. He said he recommended to Trump that Linick be terminated.

Pompeo told reporters that he was unaware of any investigation into allegations that he may have mistreated staffers by instructing them to run personal errands for him and his wife such as walking his dog and picking up dry cleaning and takeout food. Thus, Pompeo said, the move could not have been retaliatory.

Pompeo did acknowledge that he was aware of an investigation into his decision last year to bypass congressional objections to approve a multibillion-dollar arms sale to Saudi Arabia because he had answered written questions about it posed by Linick's office. He maintained he did not know the scope or scale of the investigation.

Engel and Menendez have been demanding answers and documents from the State Department and Pompeo personally for months on a variety of topics that go far beyond Linick's dismissal.

After complaining for more than a year that Pompeo and his staff have either refused to respond or provided only perfunctory answers to questions posed on personnel and policy matters, the two Democrats and their Democratic committee colleagues have teamed up to try to force a complete explanation from Pompeo and the White House as to why Trump fired Linick.

Engel and Menendez earlier demanded that administration officials preserve and turn over all records related to Linick's dismissal. They said they have received no information so far.

Linick is one of several inspectors general whom Trump has removed from office, sparking anger among mostly Democrats who say the administration is undermining government accountability.

But Sen. Chuck Grassley, R-Iowa, has said the White House is legally required to provide more answers to Congress about the firings and gave Trump a deadline to give them. But in a letter to Grassley this week, the administration offered no new details about why they were let go.