Confederate monument on Bentonville square to be moved 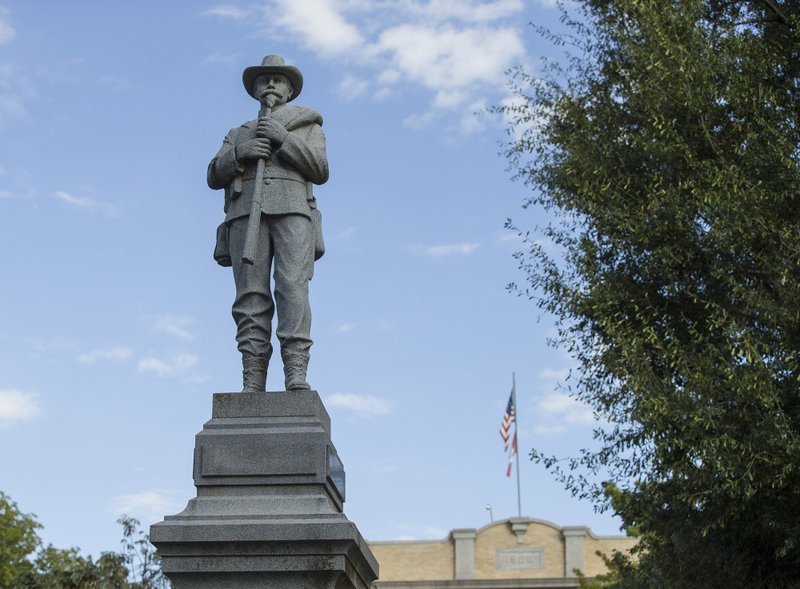 The Confederate soldier monument Wednesday, Sept. 25, 2019, on the Bentonville square. The lower part of the soldier's rifle is missing after the statue was vandalized. (NWA Democrat-Gazette/BEN GOFF)

BENTONVILLE -- The Confederate monument and statue will be removed from the downtown square, it was announced Monday.

The Arkansas Division United Daughters of the Confederacy has agreed to move the statue after discussion with community leaders about the future of statue on the square, according to a press release from the group.

The monument is owned by the UDC and it has stood on the square since 1908 in an agreement with Benton County.

The property where the statue sits is county owned property, and the statue is owned by the United Daughters of the Confederacy, County Judge Barry Moehring said. The city of Bentonville maintains the beautification and maintenance of the property.

The agreement will allow the UDC to continue to display and preserve the historical significance of the monument and its connection to the history of Benton County in perpetuity, according to the release.

"This is wonderful news," she said. "It means to me when my grandchildren and relatives come to Bentonville that I can take them to the Square without being ashamed."

The monument has also been the target of vandals. The statue was vandalized on Sept. 22. Two people on Feb. 14 pleaded not guilty in connection with felony criminal mischief.

"We appreciate the spirit of this decision of the UDC, and we are prepared to play an important role in preserving the monument in an appropriate way to commemorate Governor Berry as well as our State and county history," said Leah Whitehead, chairwoman of the historical society.

Print Headline: Confederate monument on Bentonville square to be moved