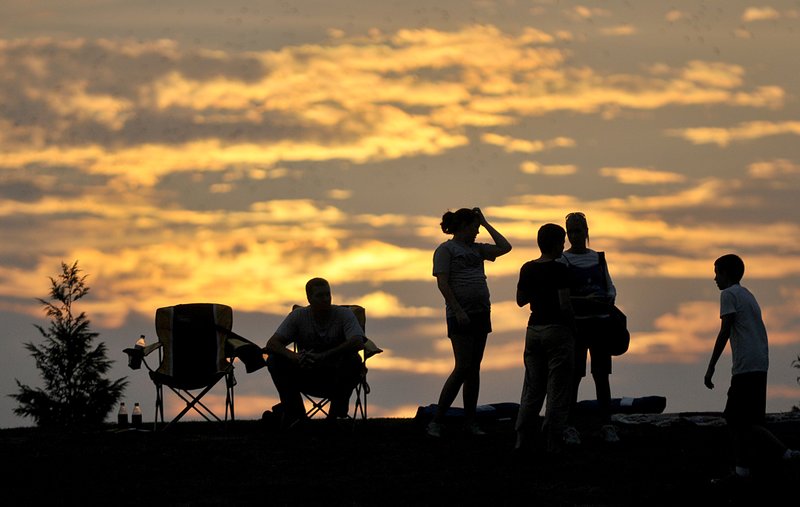 Many Arkansas cities have few, if any, plans in place to track and reduce energy consumption, carbon production and light pollution, according to a study by the Arkansas Natural Sky Association.

Only 12 of those 25 cities provided any of the documents requested, said Bruce McMath, chairman of the Arkansas Natural Sky Association.

"The general failure of Arkansas municipalities to address light pollution is disappointing, but not surprising," according to the study. "Decades of marketing by utility companies, seeking to sell electricity during the off-peak hours of the night, has engendered a false impression about the utility of outdoor lighting in the minds of the public. At the same time, the costs of lighting the night are, as yet, not well appreciated."

The Arkansas association is an affiliate of the International Dark-Sky Association. Its mission is to advance policies and practices to eliminate light pollution and its effects on the nocturnal environment, wildlife, human health, community aesthetics, safety and sky glow, according to the study, which is available at https://bit.ly/3cfLdKQ.

Fayetteville set the overall curve in the survey, according to a news release from the Arkansas Natural Sky Association.

Fayetteville is the only city in the state to have "formally committed to a carbon-neutral future," McMath wrote in the news release. Fayetteville adopted practices to shield outdoor lighting before the state Legislature passed the Shielded Outdoor Lighting Act of 2005.

"The city's Energy Action Plan was passed in January 2018 and is our comprehensive guidance document on energy policy, carbon emission reduction and climate action for the city," Peter Nierengarten, Fayetteville's environmental director, said in an email. "It contains the 100% clean energy goal and several other community and municipal government goals that we are working on to lessen our dependence on fossil fuel and reduce our impact on the planet."

The next-highest-rated cities were Bentonville and Bryant, which has the state's only master outdoor lighting plan.

Hot Springs was noted for its efforts to reduce its energy consumption and carbon footprint, McMath wrote.

"While Hot Springs did not have the precise documents requested, it produced a copy of its Green Initiative, which demonstrated a substantial citywide commitment to reducing its environmental footprint," according to the study. "Overall, its energy efforts come the closest to rivaling Fayetteville's."

Fort Smith had the most comprehensive lighting ordinance, the news release said.

"Fort Smith's energy efforts pale in comparison to Fayetteville," according to the study. "However, its deceptively simple lighting ordinance is more comprehensive in significant ways. It is the only ordinance reviewed to address the use of motion sensors and curfews so that lighting is only on when needed."

Rogers produced one of the six documents requested as part of the survey.

"While Rogers strikes out on all but one request, it has had a comprehensive energy review performed in each of the last two years," according to the survey. "The most recent one identified potential energy savings of 25-35%. The city produced documents reflecting extensive specifications for its street lighting, addressing aesthetics of the physical structures. But, unfortunately, none of it addressed the quality, quantity, need, color temperature or efficiency of the light generated."

The study singled out Goshen and Harrison, both too small to be in the survey, for having "credible lighting ordinances."

Eureka Springs got credit for shielding its outdoor lighting as required by the Shielded Outdoor Lighting Act instead of opting out on the grounds of expense.

The study lauded Gilbert, the state's smallest municipality, for its ongoing efforts to reduce its night-sky impact. Gilbert is located within the boundaries of the Buffalo National River, which became the first International Dark Sky Park in Arkansas last year, with help from the state Natural Sky Association.

"On the flip side, Little Rock ranked with many smaller communities, unable to document useful action in any of the areas of inquiry," McMath wrote.

According to the 14-page study, it took Little Rock 2½ months to respond to the request for documents under the Freedom of Information Act, even though it had no responsive documents to produce.

Little Rock did eventually provide several memos, but the memos "fail to reflect sensitivity to the environment" regarding color temperature of LED lighting and the use of "manufacturers statements of equivalency in replacing heirloom technology with LEDs," according to the study.

"Reliance upon such statements, while perhaps useful for a home owner buying a replacement element at a home supply store, is a crude way to transition to LEDs that often results in over-lighting and wasted energy," according to the study, which said a detailed explanation for why can be found at https://bit.ly/2ZRiitV.

"A city that spends over $2 million dollars on outside nighttime lighting each year should have a more nuanced approach to its lighting that involves using appropriate colors and deploying warranted minimum levels of lighting," according to the study.

Glasgow said Little Rock's sustainability office was deemed nonessential during the pandemic, so it was closed from mid-March until last week.

"I feel certain that had we been in the office during the time, we would have been involved and perhaps could have provided a better response," she said.

L. Lamor Williams, a spokesman for Little Rock, said the city received the request on March 8 and responded to it on April 20.

"The organization that requested the information was agreeable to allowing us additional time to fulfill the request, which required coordinating with several city departments," Williams said in an email. "Unfortunately, during this time, the city's FOIA coordinator left to pursue other opportunities and then the coronavirus pandemic forced the city into limited operations with a minimal staff. Our interim FOIA coordinator kept in touch with the requestor during the process."

Pine Bluff and West Memphis didn't respond to the public-document request at all, according to the study.

This is the first year the Arkansas Natural Sky Association has done the survey. McMath said he plans to do a similar survey every other year.

"Next year our intent is to survey the electric utilities and co-ops in the state about what they are doing to help their customer's light responsibly," McMath said in an email.

From the cities, the Arkansas Natural Sky Association had requested documents on:

• Quantifying energy use and/or plans to conserve energy.

• Committing the city to a carbon emission-neutral goal.

• Regulating the use of outdoor lighting, in the form of ordinances.

• Setting forth in a master lighting plan or other document criteria or specifications the city follows in selecting new outdoor lighting fixtures.

• Reflecting the city's participation in programs such as LEED for Cities, Arc for Cities, or the Energy Star program.