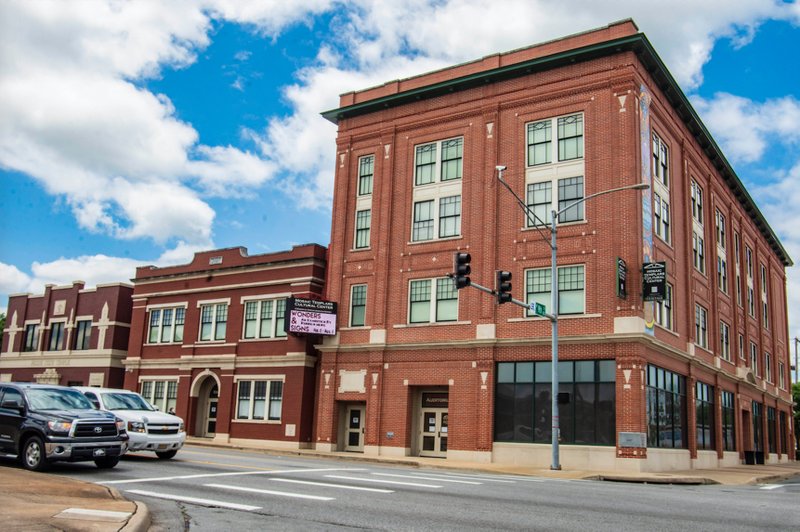 The Mosaic Templars Cultural Center in Little Rock. In April, the center achieved accreditation by the American Alliance of Museums, the highest national recognition given to U.S. museums. (Arkansas Democrat-Gazette/Cary Jenkins)

The Mosaic Templars Cultural Center in Little Rock has joined an elite group.

In April the center, a museum of the Department of Arkansas Heritage, which is a division of the Arkansas Department Parks, Heritage and Tourism, became just the third black history institution in the South to be accredited by the American Alliance of Museums, joining the National Civil Rights Museum in Memphis and the Birmingham Civil Rights Institute in Alabama.

Wait. There are more numbers.

Of the 33,000 museums that are members of the alliance, only 1,087 are accredited, and the Mosaic Templars' accreditation makes it just the ninth among black history museums in the United States to reach that mark.

Accreditation came through a process that began in 2018 and included community meetings and a visit from leaders of already accredited museums, says center director Christina Shutt.

"Any time you're evaluated by your peers is always a little nerve-racking," she says. "But I'm really thankful. The best part about the site visit is that it showed that the museum is who it says it is. We are committed to the community, and we are an inclusive place that values accessibility and making the arts more welcoming to all people."

Jimmy Bryant, director of Arkansas Heritage, says the accreditation "serves as a validation ... and it's great that we here in Little Rock can say that we have one of the three accredited black museums in the southern United States. It's quite prestigious. It really says that this museum is doing the things it is supposed to do to preserve the history of black Arkansans."

In a news release, department Secretary Stacy Hurst says the accreditation means that "Mosaic Templars Cultural Center has earned a place among some of the most prestigious museums in the country, like the Frederick Douglass House and the Smithsonian Institution's National Air & Space Museum."

Long before it was a cultural center where people can learn about history, view artworks and have gatherings, it was a thriving business started by two former slaves.

The Mosaic Templars of America was a black fraternal organization founded in 1882 at Little Rock by John Edward Bush and Chester W. Keatts that sold insurance to black people at a time when white-owned companies would not treat them equally, according to the Central Arkansas Library System Encyclopedia of Arkansas.

Along with insurance, the Mosaic Templars ran a savings-and-loan association, a newspaper, hospital and nursing school. The group claimed more than 80,000 members internationally at its peak in 1918.

"The name metaphorically linked the organization's services to African Americans and the oppressive conditions of the Jim Crow South to Moses's leadership during the Israelites' Exodus from slavery in Egypt and into the Promised Land," reads the entry in the encyclopedia.

Mosaic Templars bought property at West Ninth Street and Broadway in the thriving black business district for its headquarters, the Grand National Temple. The four-story building was completed Oct. 15, 1913, and Booker T. Washington, the author, educator, former slave and co-founder of the Tuskegee Institute, dedicated it with a speech to a crowd of 2,100.

The building was the centerpiece of the bustling Ninth Street district and featured retail shops on its first floor and offices on the second floor. The third-floor auditorium was the site of performances by Duke Ellington, Nat "King" Cole, Billie Holiday, Cab Calloway and others.

A two-story annex was built in 1918 next to the headquarters, and a third building, the State Temple Building, was added in 1921.

By the early 1930s, with the country mired in the Great Depression, Mosaic Templars went out of business.

The former Grand National Temple housed several other businesses over the years, and at times sat empty. By 1992, the building was in danger of being razed for development interests, but advocates organized the Society for the Preservation of the Mosaic Templars of America Building and in 1996 saved it from being torn down.

The building was bought by the city and was turned over to the Department of Arkansas Heritage in 2003, which planned to renovate it and open it as the Mosaic Templars Cultural Center in late 2006 with a mission to preserve, interpret and celebrate black history and culture in Arkansas.

But there was a bump along the way.

A fire, likely set by accident by someone seeking shelter in the early hours of March 16, 2005, destroyed the structure. The renovation became a rebuilding project.

The $7 million, 35,000 square-foot cultural center, which opened Sept. 20, 2008, echoes the architecture of the original Mosaic Templars headquarters and annex.

"We are on a site where the building burned to the ground," Shutt says. "The poignancy of that story and of how the museum's history has, in many ways, represented the African-American experience in this country — working and achieving and striving for a brighter tomorrow. The accreditation, to us, is a big piece of that."

He grew up in Little Rock's East End area and remembers going to Ninth Street with his parents when he was a child.

"I'm almost 70 years old, and I made my first trip to Ninth Street when I was 4 or 5 years old," he says. "That's where the barber shops were, so my dad would bring us down."

It was where he and his friends could go to a movie theater and sit wherever they wanted, unlike in segregated theaters where they could only sit in designated areas.

"You name it, it was on Ninth Street," he says. "Clothing stores, grocery stores, barber shops, beauty shops, all your black churches were in this area."

The history of Ninth Street is celebrated in "A City Within a City," one of the museum's permanent exhibits, and the original Mosaic Templars structure is explored in the permanent exhibit "A Building for the Community."

Other perpetual exhibits include "Entrepreneurial Spirit," "Brotherhood and the Bottom Line: the Mosaic Templars of America," "African Americans in Arkansas" and "A Living History: Arkansas Black Hall of Fame."

"Wonders and Signs," an exhibit featuring the bold, colorful art of Little Rock's Perrion Hurd is on display until Aug. 8. Large, brightly colored banners painted by Hurd also adorn the outer walls of the center.

"There is so much power in being represented and seeing people that look like you on the walls of a museum," Shutt says. "I remember being a little girl in Kansas City and going to museums, and there was no one that looked like me in the museum, no one with my same skin color or hair type. There was nothing about me in the museum. Outside of a small American Indian exhibit, there was nothing that talked about people of color and the impact they had on the city."

Shutt has been with the cultural center four years, coming there after a stint at Hendrix College in Conway where she was associate librarian for special collections and instruction.

She prefers to emphasize telling untold stories at the center, she says, like the 2019 exhibit "Finding Freedom in the Forest: Opportunities and Challenges for African Americans in the Timber Industry."

"We had a replica of Crossett from the 1920s that we had built, with a real working train," she says, still obviously impressed with the project. "It blew me away."

A 2018 exhibit, "Don't Touch My Crown," about black women and hair, was a landmark and won the 2019 Arkansas Museum Association Outstanding Exhibition Award.

"It was a transformative exhibit for the museum," Shutt says. "Black women are often left out of the historical narrative, so that exhibit was really about talking about the culture of hair and how these women have found empowerment through their hair."

Stephanie Sims is the director of the University of Arkansas at Pine Bluff Museum and Cultural Center and was a guest curator for "Don't Touch My Crown," which was inspired in part by her graduate thesis.

The work done by the cultural center, she says, "gives people the opportunity to learn more about African American heritage, to learn more about the economy and the impact of Ninth Street in Little Rock. You get to learn so much about your local history and how national events impacted what was going on here. They are kind of like the Mecca for African American history in Arkansas."

Just because it's now accredited by the American Alliance of Museums doesn't mean the cultural center can ease up and take a break. On easels alongside current exhibits are plans for future exhibits and upgrades to the space.

"Museums are always evolving and changing," Shutt says. "We have a capital campaign going on now to completely remodel and re-envision the entire first floor exhibit space and tell a broader story about Arkansas.

"Of course, we will be talking about the Mosaic Templars of America, but we will also shine more light on black schooling and the history of segregated schools. We want to talk more about farming communities and rural life, and we will include some more stuff about hair and more information about beauty parlors and barber shops."

There will also be areas for feedback from visitors.

"I want to get out of this mindset that we put the old and dusty into museums," Shutt says. "Museums are dynamic institutions that have an impact."