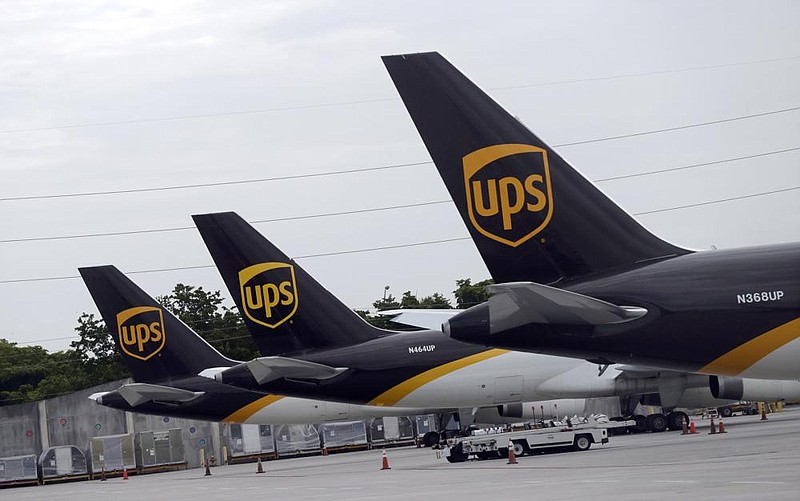 The pandemic-fueled boom in online shopping shows no signs of slowing down, providing more business for delivery companies like UPS Inc.

UPS said Thursday that its shipments from businesses to U.S. consumers soared 65% in the second quarter, helping lift the delivery giant to a $1.77 billion profit.

The results were better than expected, and UPS shares jumped 14% in New York trading Thursday.

In April, UPS executives thought online shopping would slow down after the early days of the pandemic.

"At the beginning of the second quarter, we assumed demand would slow. Instead, we saw just the opposite," said Tome, who took the reins June 1. Consumer online spending surged as stores closed, people sheltered at home and the government sent them checks, she said on a call with analysts.

The company's volume jumped 23% to more than 21 million packages a day. Revenue rose more than 13%, to $20.46 billion, easily beating the $17.34 billion average forecast in the survey by Zacks Investment Research.

But while stay-at-home orders and other restrictions to slow the spread of the new coronavirus have meant more business for the delivery companies, the volume has strained their networks and threatened to drive up costs.

The increase in home deliveries also weighed on the adjusted domestic profit margin, which fell to 9.3% from 11% a year earlier. That's because residential service has fewer packages per stop than commercial and requires drivers to travel more between locations. UPS' U.S. revenue per piece fell 5% in the second quarter.

The Atlanta-based courier and rival FedEx Corp. have been in overdrive since the coronavirus swept the world this year, handling soaring residential deliveries while rushing personal protective equipment to hospitals. Both companies applied peak-season-style surcharges commonly associated with Christmas on large customers as demand jumped and new expenses arose that were needed to protect employees and keep sorting hubs free of the virus.

Tome hinted that UPS could raise prices further on big retailers, with most of them even more dependent on online orders now because many consumers are afraid to go back in stores.

"While retailers may squawk at price increases that come their way, large retailers have a way to spread that across [many items they sell] and nobody knows," Tome said.

Tome, 63, is a former chief financial officer at Home Depot and longtime UPS board member. In her first earnings call with investors, she hinted at changes at the 113-year-old company.

She suggested that in the past UPS chased volume instead of profits and "over-engineered" things by, for example, offering too many services that complicated the company's operations and confused customers.

Five times Tome said that under her leadership, UPS would be "better, not bigger."

Tome said that after a surge in cargo shipments from Asia, UPS could have bought more Boeing 747 freighters at good prices because Boeing will stop building the planes in 2022. But the jumbo jets would mostly be useful only when UPS needs excess airfreight capacity, "so we passed on that investment that in the past we might have made," she said.

But UPS will spend $750 million this year on shortening the time packages are in transit.

The company's second-quarter profit was up 5% from year-ago earnings of $1.69 billion.

Business-to-business package volume fell 22% in the quarter, but has been recovering. In July, such deliveries were down about 9%, the company said.

Adjusted for nonrecurring costs, UPS said earnings came to $2.13 per share. That more than doubled the $1.04 per share average forecast among analysts surveyed by Zacks.

Helane Becker, an analyst at financial-services firm Cowen, predicted UPS will do well in the third quarter, but said the company will be challenged to handle rising e-commerce volume during the peak shipping season before Christmas.

"The solution may be increased surcharges to limit volumes during peak, which again would be positive as UPS looks to improve margins of residential delivery," Becker wrote in a note to clients. "Another solution would be to limit the amount of low-margin volume it accepts."

Information for this article was contributed by David Koenig of The Associated Press and by Thomas Black of Bloomberg News.