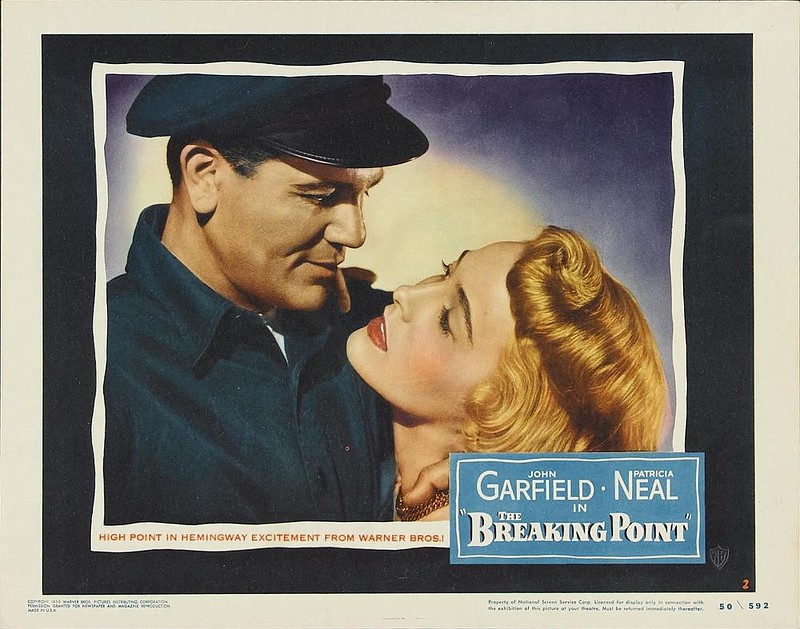 Harry Morgan (John Garfield) does his best to discourage the advances of Leona Charles (Patricia Neal) in the superb film noir, “The Breaking Point,” a remake of sorts of “To Have and Have Not.”

Hollywood has made several films based on Ernest Hemingway novels. And one of the finest, if not the finest, is "The Breaking Point," made by Warner Bros. in 1950. This film is a quasi-remake of "To Have and Have Not," which was a huge hit for its stars (Humphrey Bogart and Lauren Bacall) and Warner Bros.

"The Breaking Point" is film noir at its best. John Garfield, in one of his best performances, plays Harry Morgan, an anti-hero type who captains a charter boat. Morgan is a family man (with a wife and two little girls) who is trying his best to keep above water (pardon the pun). In fact, he will take on jobs that are clearly illegal -- with customers who are the scum of the earth -- just to make enough money to feed his family. Phyllis Thaxter is his wife, Lucy, and their scenes together are quite sensual, rare for 1950.

The script is far superior to the original text. Besides giving Harry a family, screenwriter Ronald MacDougall changed the location from Martinique to Southern California. When Harry is about to leave Lucy for the first charter of the story, she tells him everything will be OK while he's gone, even though they owe everybody in town. At one point she says: "I lay awake last night just thinking about you. I can think about you anytime and get excited. Hold me ... just hold me."

On that first charter, he meets up with a high-class call girl Leona Charles (a sexy, blond Patricia Neal) who wanders in and out of his life. She is initially unimpressed with him but changes her tune when they get in trouble. She is witness to some of the more violent scenes in the story.

The cast includes Juano Hernandez as his shipmate Wesley Park, a serious version of the character Walter Brennan plays in the earlier film with Bogie and Bacall. It is refreshing to see a Black man who isn't a Stepin Fetchit caricature for comic relief, but a regular working man who just happens to be Black. His performance is heart-breaking, and one that stays with you long after the film ends. (Hernandez played a similar serious role in "Young Man With a Horn," also from 1950.)

Most townspeople and men in the Coast Guard think Harry is a moral, hard-working man. And he is, until he isn't.

While in Mexico with his charter, he recognizes a sleazy lawyer acquaintance named F.R. Duncan (Wallace Ford) who offers Harry a job that is highly suspect. He tells Duncan to blow off and comes upon Leona sitting by herself at a cantina where cockfights are going on in the back room.

Leona: "All that trouble for an egg."

Eventually, Harry has to take Duncan's charter just to make enough money to get back home. This involves smuggling several Chinese men from Mexico into the United States. It doesn't end well but Harry, Leona and Wes manage to escape with their lives. When he gets home Lucy knows that something bad happened. He eventually tells her he had to kill a man and starts crying. She tells him "You're more of a man than anybody I ever met."

Later, Harry is drinking at a bar where Leona is with friends. She leaves them to flirt with Harry, who isn't interested. He gets drunk and his wife is summoned to come get him. The two women size each other up and Leona assures Lucy she and Harry did not do anything untoward. Harry even says "meow, meow" after Lucy says she has great legs -- for walking.

When Harry arrives home later on in the film Lucy has dyed her hair blond. She wants to look like Leona because she thinks that's what Harry likes.

A third charter, also set up by Duncan, which comes near the end, is much worse than the second. Some men plan to rob a race track and Harry's boat is their getaway. Fortunately, Harry is one step ahead of the robbers he is taking to the other side of Catalina, who plan to kill him once they get where they are going. He arms the boat with guns in several hiding places, just in case things go south. Needless to say they do.

As Harry is lying in a Coast Guard boat after the bloody confrontation with the robbers, he tells Lucy "A man alone ain't got no chance." The doctors want to amputate Harry's left arm and he finally agrees to it. Lucy tells him again: "You're more of a man than anybody I have ever met."

The final scene on the dock with Wes' young son (Hernandez' real son) should leave you choked up, and for good reason.

The acting, script and direction (by Michael Curtiz) are first-rate, making it classic filmmaking.

One final note, once the film was finished Garfield's name appeared on a list of actors suspected of being Communists. The cowardly studio buried the film with little or no marketing upon its release. Garfield refused to name names in his testimony to the House Committee on Un-American Activities and was blacklisted. He made just one more film ("He Ran All the Way") which he produced. He died of a heart attack in 1952 at age 39.

Available for streaming on Amazon Prime