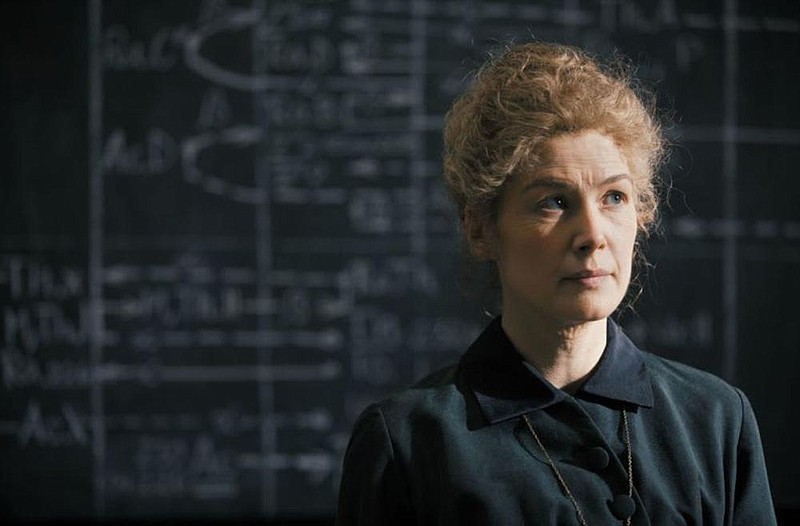 Marie Curie (Rosamund Pike) was the first woman to win a Nobel Prize, in physics, and with her later win, in chemistry, became the first person to claim Nobel honors twice. Along with her husband, Pierre, she discovered polonium and radium, and championed the development of X-rays. But an amazing life does not necessarily translate into a dazzling movie.

"Radioactive" presents the perfect tipping point between promising scientific discovery and the utter devastation it can also wreak, the point by which our collective reach vastly exceeded our grasp, with some unintendedly devastating results.

There is a solid idea in Marjane Satrapi's film about the discovery of radioactive elements, and the cultivation of it by the Curies -- Pierre (Sam Riley) and Marie (Rosamund Pike) -- an extraordinarily gifted married couple of scientists in turn-of-the-20th-century France, a bio-pic in which the subjects' work is put into a kind of future relief as the other notable highlights of their lives are revealed, allowing the viewer to get a sense of both the figures and their achievement, in painful context of one another.

Alas, behind Jack Thorne's wooden screenplay, all Satrapi's film manages to do is highlight the ineffective nature of the bio-pic genre itself, its constant cause-and-effect dynamic which renders human lives like so many dusty museum exhibits: The dull logistics of the screenplay are far too mechanical to lend the film the sense of resonance Satrapi is clearly after.

It certainly isn't from a lack of material: We follow the extraordinary life of Madame Curie, as she and her husband isolate and identify two new radioactive elements -- Polonium and Radium -- for an unwitting and ill-prepared 19th-century scientific community in Paris. From this momentous achievement, one for which she and her husband received the Nobel Prize, we're given lip-service as to some of the other landmarks in their life together: Daughters are born, including Irene (as an adult by Anya Taylor-Joy), who would go on to win her own Nobel Prize; sicknesses are entertained; lives are lost; personal lives get notorious and yet more discoveries are made, but the film has the perpetual sense of wanting too fast to get somewhere it's not sure where it wants us to go.

This stunted, clunky style rules throughout the proceedings -- no sooner do we learn the adult Marie is terrified of hospitals than we immediately get a flashback scene of her as a young girl, attending to her sick and dying mother in one, allowing not even a moment's pause to consider her emotional position before having it forcibly thrust upon us -- which makes even the film's less lucid stylings, as with a couple of dream sequences, feel abrupt and ill-formed.

As the Curies' lives are revealed, we are given flash-forwards to what their pioneering use of radiation ultimately brings to the world: Unthinkable nightmares such as Hiroshima and Chernobyl, but also X-ray machines and cancer remission tools, a literal gallery of possibilities that the elderly, dying Madame in the film's closing coda gets to stroll through so as to take in the full impact of her work.

Satrapi, the creator of the brilliant "Persepolis" graphic novel, and the writer and co-director of the brilliant film adaptation has done much more personal feeling work in the past, which makes this dull misfire all the more glaring. You can see the appeal of Madame Curie as a sort of proto-feminist, a fierce and brilliant scientist who never backed down from a fight, and lived her life as an independent force of nature, but the kindest way of putting it is this film doesn't nearly do her justice.